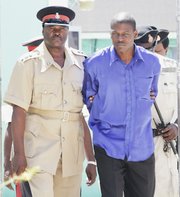 Constable Lawrence Bastian outside of court.

A POLICEMAN found himself before the courts yesterday accused of sexually assaulting an 11-year-old girl.

Constable Lawrence Bastian, however, denied the report and pleaded not guilty to the indecent assault charge when arraigned before Magistrate Guilimina Archer in Court 10.

While there was no objection to bail by the prosecution, the constable of the Mobile Division will not only have to refrain from interfering with the child and prosecution witnesses, but will also have to wear an electronic monitoring device.

The police prosecutor said Bastian attempted to escape custody on being told of an investigation into the alleged incident.

Magistrate Archer told the accused that he had to abide by the conditions set out for his extended $6,000 police bail. Bastian is alleged to have committed the offence on February 12. Trial has been set for July 16.

The police prosecutor said there was no objection to bail, but requested that the accused be fitted with a monitoring device.

The prosecutor explained that he received information from the constable’s commanding officer that Bastian attempted to escape custody.

The magistrate extended the officer’s police bail of $6,000 with a suretor.

“There is to be no interference whatsoever with any of the prosecution witnesses, particularly the virtual complainant,” the magistrate told him. She asked if he understood the conditions.

She said failure to obey this order would result in the strong possibility of his bail being revoked.

how do you even get caught in a questionable situation with an 11 year old? straightfacesmiley

whatever 6 years, 9 months ago

Sick bastard! ZERO TRUST in the RBPF. Put him out in Rawson Square and cut his tounge and private part off. SICKENING!!!!!!!

So why didn't they call Corporal Roach to ut him in a sleeper hold when he tried o escape . LOL

I reiterate...The police are the biggest crime syndicate in the country...Operating above, below and between the law with impunity.