Wearing The Poppy With Pride 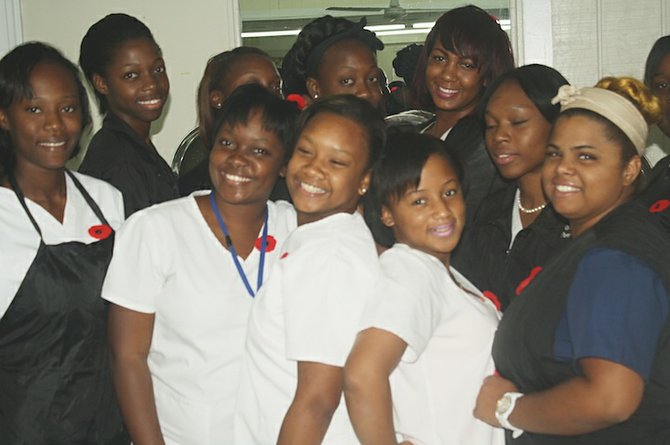 STUDENTS, staff and colleagues at the Bahamas Technical and Vocational Institute put on their poppies in the run-up to Remembrance Sunday.

The poppy has a long association with Remembrance Day and people across the Bahamas are wearing their poppies with pride as November 11 approaches.

The day recalls the end of hostilities of World War One on that date in 1918.

Hostilities formally ended “at the 11th hour of the 11th day of the 11th month,” in accordance with the Armistice, signed by representatives of Germany and the Entente countries between 5.12am and 5.20am.

The destruction brought by the Napoleonic wars of the early 19th Century transformed bare land into fields of blood red poppies, growing around the bodies of the fallen soldiers.

In late 1918, once the conflict was over, the poppy was one of the only plants to grow on the otherwise barren battlefields.

The significance of the poppy as a lasting memorial symbol to the fallen was realised by the Canadian surgeon John McCrae in his poem ‘In Flanders Fields.’ The poppy came to represent the sacrifice made by his comrades and quickly became a lasting memorial to those who died in World War One and later conflicts. It was adopted by The Royal British Legion as the symbol for their Poppy Appeal, in aid of those serving in the British Armed Forces, after its formation in 1921.

It is now an emblem across the world for those who have died in conflict.

King George V was the first to institute Remembrance Day, when on November 7, 1919, he set aside a day during November to remember British soldiers killed during World War One.

The Bahamian Government made the decision to commemorate Remembrance Day on the nearest Sunday to November 7 by designating the 2nd Sunday in November as Remembrance Day. This year it is November 10.

Two services will be held, the first, an ecumenical service at Christ Church Cathedral, followed by a parade and a second service at the Garden of Remembrance.

In attendance at the services are the Governor General, the Prime Minister, judiciary, other government dignitaries, heads of the police and Defence Force veterans from the Bahamian Chapter of the British Legion and their families.

Participating in the parade are marching youth bands and youth groups, including the Boy Scouts, Guides, Boys Brigade, church youth groups, cadet sections of the police and defence forces and government uniform branches.

At the Garden of Remembrance a brief interdenominational service is held, led by the Bahamian Christian Council, followed by the laying of wreaths by the diplomatic corps and other non government organisations at the base of the Cenotaph.

The 2nd Annual Remembrance Day Concert - A Tribute to The Royal Bahamas Police Force, from the Nassau City Opera Company and Nassau Chamber Ensemble, is on Friday, November 8 at 8pm at Christ Church Cathedral in George Street. Tickets are $25.

• IF you have a story about our Bahamian war heroes, or you and your colleagues want to be pictured wearing your poppies, contact Rashad Rolle at The Tribune by emailing rrolle@tribunemedia.net or calling 5022359.