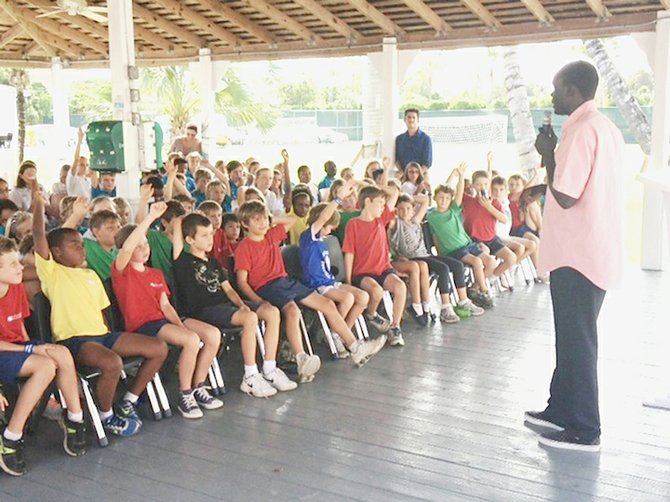 THE MEAH Foundation believes in the power of stories to change lives and bring about important transformations in the lives of individuals.

Last week, the organisation extended a hand all the way to Sudan, Africa, inviting South Sudanese writer Alephonsion Deng, co-author of “They Poured Fire on Us From the Sky: The True Story of Three Lost Boys of Sudan” to speak at the first Meah Foundation Lecture Series.

In 1987 Alephonsion was seven years old when his village in Southern Sudan was attacked by government troops in a brutal Civil War. To avoid capture he ran into the night with many other young boys. Without food, water, shoes or parents, he crossed 1000 miles of lion and crocodile infested territory. After five years of fleeing war, starvation and wild animals, he reached the Kakuma Refugee Camp in Kenya and began his education.

Tina Klonaris- Robinson, Meah Foundation Founder, said the reason she decided to bring Alephonsion is because his story is beyond powerful.

“His story is not only of survival, it is one about overcoming adversity. It’s a story of faith, courage and determination. I think that our entire community can benefit from the lessons and wisdom of his story and the experience of what he went through. We are excited to have him as our first official speaker for the Meah Foundation’s speaker series,” said Tina. When a person hears a story of someone’s life experience, they are connected to that person, and the Meah Foundation believes that this opens their hearts, said Tine. Open minds and hearts are what creates change.

“I feel like we are lacking enough understanding of the world outside, and when we don’t know what other people’s life experiences are, we don’t know how to empathize and we stop feeling. Nothing good can come from that, so I really truly believe that when we start bringing people to our community that have very different life experiences, we can begin to make change,” said Tina.

In the case of Alephonsion, Tina said he has experienced civil war and he is still a survivor. “I think by listening to stories like his, we gain the gift of understanding which is one of the greatest gifts that we can have,” she said.

While in the Bahamas, 30 year old Alephonsion visited St Andrew’s School, Queen’s College and the Willamae Pratt School for Girls. He shared his story at Meah Foundation events held at the Rainforest Theatre, Van Breugel’s Restaurant and the College of the Bahamas’ Harry C Moore Library.

“The name Lost Boys came to be when our village was attacked by fierce Arab horsemen. We, little boys, spewed out of the blazing village like a colony of ants disturbed in their nest. We ran in different directions not knowing where we are going. We gathered some fruits for our breakfast and lunch. We, little boys, were so messy, all chaos and cries filled the dark fiercely lightless night,” he shared with attendees at the Rainforest Theatre.

Days went by, Alephonsion said he witnessed death, walked on feet and became weak. Upon his journey of searching for help, he fell weak at a tree, where he came across a couple. He said the woman turned her back to him, but the man offered him food. He later came to learn her children had died in the war, and she felt bitter pain that she and other children had lived.

“I realised that war makes people equal, regardless of their age, education and background. If someone’s head is blown off you see it, but if they are damaged inside, there is no way I can tell the wounds that they are carrying. This woman brought clarity for me,” said Alephonsion.

He said his journey taught him a few things and if he didn’t go through what he went through, he would know how to be strong today and how to communicate with people.

“I have learned the importance of replacing judgment with curiosity. Evil begins the moment we begin to objectify as opposed to identify with people. Compassion is not feeling pity or sorry, it is feeling with a heart filled of curiosity and a desire to understand another’s life. When you meet someone so different from you, why not learn their story.

“I guarantee you your world will grow beyond your imagination. No matter how much you and I suffer, we have to remember to never let life close our hearts. The choice is always ours, life is sweet when our hearts are open,” said Alephonsion.

He said he didn’t share his story for anyone to feel sorry for him, he shared it in hopes of encouraging others to make conscious decisions about the precious nature of life.

Tina said she learned from Alephonsion that everyone in life has choices, especially when they think that their life is so bad.

“It tells me that every single child born here in the Bahamas who has experienced hardships and pain, has the same potential to become something great in this life.

“Alepho was determined to make something of his life and even with the hardship and trauma, he knew that there was more out there, and that the only way that he can stop people from experiencing what he experienced, was to pick himself up and become something. If he can do this, then there is no reason why anyone else can’t try,” said Tina. The feedback he received from the Bahamian community showed that his story was life changing, said Tina. She saw tears as well as smiles, throughout Alephonsion’s lectures last week. “He has opened their hearts and it is something that I think is very special because it is true. Just the humility and humbleness of his story, opens your heart. People said they never knew this can happen. It just put life in perspective,” said Tina.