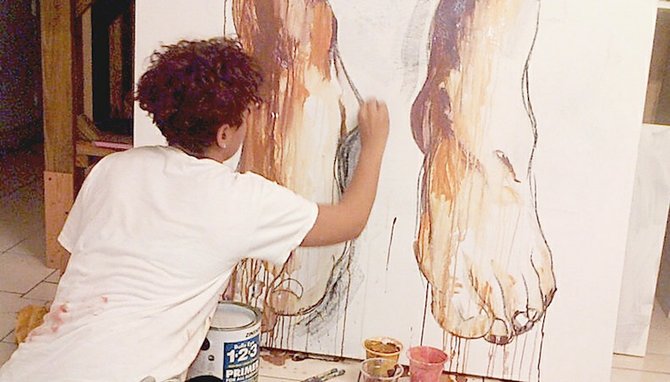 THE title of Bahamian artist Angelika Wallace-Whitfield’s upcoming exhibition, “Father Knowledge, Mother Tongue” came about during the production of the art pieces for the show.

The exhibition, exploring social subconscious identity, is scheduled to be held at the Doongalik Studios Art Gallery on December 5.

Angelika, who is the curator at the D’Aguilar Art Foundation (DAF) and a curatorial assistant at the National Art Gallery of the Bahamas (NAGB), said the process of producing and preparing for the exhibition is one that allows her to explore herself as a mixed raced Bahamian-Jamaican, raised in a broken family.

It allows her to delve into her own social and self-perception.

“I have always been interested in exploring contemporary reality, as well as the subconscious and social identity of individuals and how they interact. Our perception of ourselves can be identical or the opposite of the perception we give to others,” said Angelika.

A person’s mother tongue is their first learned language, and as she was raised by only her mother, the characteristics that she has acquired, beyond but inclusive of linguistics, are a reflection of her, says Angelika.

“However there are certain qualities that are innate to all of us and I am often told that I remind people of my father, which knocks on the door of the nature vs nurture debate. I was raised by my mother but still some of my characteristics resemble my father despite him not being present,” said Angelika.

Within the contents of the show, Angelika said she attempted to reveal the concealment of certain identity issues to create a confrontation of these issues that people tend to ignore.

She says knowledge is the understanding of something from experience or education, and most of what she knows of her own father has been taught through others hence “father knowledge.”

“I have always wondered how I appear to those around me. I feel that we all have this perception or image of ourselves that acknowledges our personal story but to those around us who don’t know our stories, what perception do we give off?

“When someone interacts with you, they get your outer shell, the part of you that you want to give or subconsciously give but that’s all they get. We can give off and hold back as much as we choose to a certain extent. So within the pieces there are a lot of figures but you can’t tell whether they are man or woman, black or white,” said Angelika.

Angelika said her style of art work has moved from picturesque to instinctive and fluid. This development has allowed her to take the realistic and abstract and place it next to another object or in another position to change its meaning, she said.

Working large will always be her first love because it allows the viewer to appreciate the image from a distance but as they move closer, the image distorts and leaves room for further interpretation, she said.

As an artist, Angelika said limitations lead to the death of creativity and through breaking these barriers, creation, invention and beauty are born.

“I would like people to take from this show whatever they want and can. Like I said this show is all about perception so I am expecting feedback of all kinds; of course I’m looking for people to relate to the pieces but all in all I would just like to hear what everyone’s perception of the pieces are,” said Angelika.

The exhibition runs until December 20. This will be Angelika’s last solo project for the year, but there are always more art works and exhibits in the making.

“Besides the exciting projects I’ll be working on from the galleries with other artists, right now my main focus is Transforming Spaces. However I’m sure between now and 2014, more projects will reveal themselves,” said Angelika.