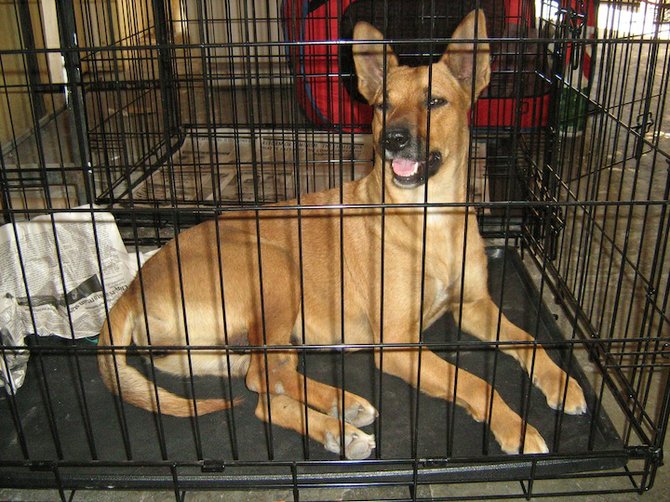 One of the dogs treated at last year's Operation Potcake.

Operation Potcake has been cancelled following opposition from local vets. How do you think the spay and neuter programme should be run?

THE internet exploded with anger yesterday over the cancellation of Operation Potcake following objections from the local veterinary association.

When The Tribune broke the story – the most read story on www.tribune242.com yesterday – members of the public took to Facebook, Twitter and other social media to vent their exasperation.

The highly successful five-day dog spay and neuter project, lauded by Prime Minister Perry Christie in its inaugural instalment last year, was sunk because the Veterinary Medical Association of the Bahamas (VMAB) blocked the entry of foreign volunteers set to donate their time and skills free of charge.

Instead, the local vets said they would undertake the project themselves, but could only do so over three days and for $50 per surgery – a price the non-profit organisers say the cannot afford. At that rate, the first project would have cost more than $100,000.

“Franklin Burrows” said: “This is absolutely absurd. The local vets do not have the time nor the resources to carry out such a huge task. Very, very selfish of them to take this stance.

“So now the animals will continue to suffer, and these same local vets will be no better off, because the people who this programme helps cannot afford the fee.”

“Shae Shae” said: “Why stop the people from helping the dogs? Especially for free – so many dogs are suffering on the streets. Not everybody that cares will be able to shell out $50 per dog for two, three, four dogs.

“Anthony Hughes” said: “This is very sad. The VMAB needs to offer their services free of charge for this event, or allow the foreign volunteers to do the charity work they’ve so graciously offered.”

“Pauline Malone” asked the vets to “please put the animals FIRST and not your pockets,” while “SMT” blamed “pride and egos blinding rational decision making, AGAIN.”

“Indi InParadise” exclaimed: “My God! Shocking and disappointing!” while Michael Knowles warned local vets to “keep it classy... Don’t let that greed come back to bite you in the a.”

“ADubbs” said: “I see a lot of ridiculous things in the news, but this... Why would they stop volunteers from coming in to help take care of this problem? They suddenly want to do it themselves? And want to be PAID?! Get the h*ll out of here!”

“RUKiddingMe” said: “This activity does not cost the Bahamian people one red cent! It is done out of care and concern and in fact, actually saves in the long run. This ridiculous proposal from the VMAB will do absolutely to alleviate the (stray) potcake situation. The people who bring their dogs to these clinics would not otherwise do so. So the VMAB is not out a penny! Furthermore, those volunteers who come from away pay their own way, pay for accommodations, pay for meals and other things – in other words they also contribute to the local economy!”

“Bahamianpride” said: “The volunteer system was working and more importantly the animals were being helped by people who genuinely cared about them. We have a terrible potcake problem, its unsafe, unsanitary, and cruel to the animals.”

Meanwhile, “UserOne” warned that: “This news has gone international. What a sad situation for our country when we tell foreigners they are not welcome even when they are trying to help us solve a problem.”

“TERRI” said: “How sad that not only are they unwilling or unable to donate their time and service in the same manner as the ‘foreign’ volunteers, but they are so ‘blind’ they are willing to stand in the way of those that are. It would have sent a much better message to Bahamians if they had simply embraced the help and contributed whatever time and services they could.”

“Outislandermirror” wandered: “Why are we so good at shooting ourselves in the foot? Where are we going to get the money to pay our vets $50/dog? We like our animals but very few of us are willing to shell out that kind of money for animals that we hardly know.

“We don’t want them hurt but we can’t pay to have them fixed. Having volunteer vets come in to spay/neuter these animals that our vets won’t do without pay is a perfect solution. Are our vets really that insecure?”

And Stephen B Aranha took to Twitter to declare: “What am I grateful for on this Thanksgiving day? That I am not a Nassau vet!”

One as to wonder who is running our country? When a group of local Vets can dictate who can and cannot come into our country to provide much needed public service at NO cost to the public purse it sure looks like someone is asleep at the helm.

The potcake issue is not new. It impacts our daily lifestyle in so many ways including health and safety as well as tourism.

I pray government will wake up and inform this group that acting against the best interests of the people is unacceptable behavior and will n longer be tolerated.

I suggest we keep the heat turned up internationally and throughout the Bahamas until we get a satisfactory response from the Prime Minister...who can make this happen NOW!!!

Vets turn against local pot cakes. Is it the Veterinary Medical Association of the Bahamas or BEC. Both sound about the same to me. Then again, we could call this the "local vets turn as greedy as the double dippers." Thanks Tribune for enlightening news that the local vets are in such bad financial shape, they're turning against our pot cakes. Maybe your newspaper can run a couple of free "Bake Sale" ads" for our starving Comrade vets.

The impression is given that foreign vets donated their services taking business from Bahamian vets. I do not know this to be true. The vets that came here and donated their services were caring Bahamian vets. Local hoteliers gave away accommodations, ice, vehicles, food, blankets, you name it. It was a splendid example of a community coming together for the good of all. What will happen without this when the potcake numbers are overwhelming us again is this: locals will poison them, some will take shots at them and wound them to crawl into the bushes and die. Others will starve in the dumps. Yet again, a splendid example of how Flip Flop Christie operates under the least bit of pressure, no matter how irrational.

What ever came out of the two animal lovers who were struck and killed story.