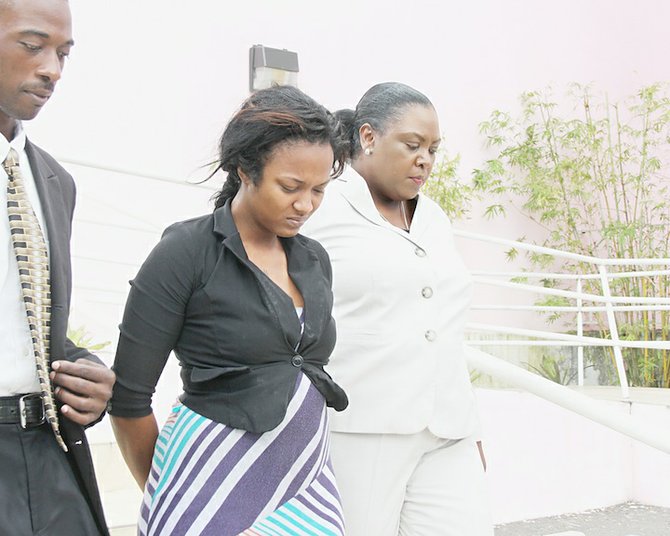 A MAGISTRATE’S decision to deny bail to a Jamaican woman accused of being a human trafficker, left the accused in tears at the end of the arraignment and begging her Bahamian husband not to leave her.

Apolonia McLean Smith, 23, appeared before Acting Chief Magistrate Joyanne Ferguson-Pratt facing a charge of “trafficking of a person”, “unlawful withholding of papers”, and “transporting a person for the purpose of exploiting such person for prostitution”, alleged to have been committed between May 1 and May 27 this year.

While the acting chief magistrate acknowledged submissions made by Smith’s lawyer that her client could not be deemed a flight risk on the basis on her nationality alone – as she has ties to the Bahamas through her husband and a child from their union – the magistrate agreed with the prosecution that the allegation “is a serious offence.”

However, she also told the accused of her right to appeal the decision to the Supreme Court.

It is claimed that McLean, for the purpose of trafficking of persons, recruited, transported, transferred, received and/or facilitated the arrival of a Jamaican woman into the Bahamas by means of deception or fraud.

It is further claimed that she withheld the Jamaican’s passport and brought her into the Bahamas to be exploited for prostitution.

McLean pleaded not guilty to all three charges.

When the issue of bail arose, Vinette Graham-Allen, director of public prosecutions, strongly objected to the accused being given a bond.

Though the DPP noted that the 23-year-old accused had no antecedents in the Bahamas and had a spousal permit, she said that the accused was “not employed, is a Jamaican national and is considered a flight risk.”

“She is the holder of a Jamaican passport and there is reason to believe, pursuant to the Bail Act, will interfere with the virtual complainant and witnesses,” the prosecutor added.

The DPP further noted the seriousness of the allegation.

“This is serious. not only in the Commonwealth of the Bahamas. This is a serious offence that the world has frowned upon,” the DPP emphasised.

Lawyer Tonique Lewis, while noting that her client had no antecedents in the Bahamas and had a spousal permit, strongly refuted the DPP’s submission would be a flight risk.

The lawyer said that at the moment, her client’s travel documents were in possession of the Royal Bahamas Police Force.

She also noted that unemployment on its own could not substantiate denying bail to McLean-Smith and that the virtual complainant, based on her information, was under police protection that Central Detective Unit officers would be able to verify for the court.

“If her whereabouts are unknown, there can be no interference,” Lewis added.

Lewis concluded that if there was concern about her client leaving the jurisdiction, “there are conditions that can be put in place as well.”

The magistrate, having set aside November 28, 29, December 11, 18 and January 29, 2014 dates for trial, said that could be no “unreasonable delay” in this matter, as the court had made the matter one of top priority.

Having considered submissions by counsel, the magistrate agreed with the prosecution that the allegation “is a serious offence” and denied the Jamaican bail in the circumstances.

However, she also told the accused of her right to appeal the decision to the Supreme Court.

Before being remanded to Her Majesty’s Prison, she was allowed a few moments to talk to her husband who whispered to her. She started to cry. “Don’t leave me,” she pleaded.

She needs to be deported back to Jamaica after serving her time in jail!!

I'm wondering why when I read articles here the reporters most often find the need to repeat 3 times what is stated. Once or twice is good. Third time the repetition leads me to believe the reporters/editors do not know how to report a story.

everything that shes being charge for is all true they should lock her up,she even pay Patrick smith to marry to her,i was one of her victim, and many other girls,she even a thief she bring the girls in the country and rob them then call immigration,she keeps everyone passport and give fake stamp saying we have time in the country she should be punish,mi just sorry for her son and 5 yr old daughter,this is all true

This is a true testiment that GOD don't like ugly! I'm also one of her victims . She really is a heartless girl. Don't let her tears fool you. Every thing the above comment says its true. That girl cost me 4 months lock up , 4 months unable to have any contact with my family and my child. She robbed my money and held my passport saying she will get me time in the country. I'm not sorry for her she honestly deserves everything that is coming to her. She called immigration on me because she didn't want to hand over what was owed to me. GOD don't like ugly, she deserves the book thrown at her. And patrick smith is not her babys father . That girl has even the courts fooled.

Shes a real wicked an most of my frens got catch through that bitch lock her up an throw away they keys she too rass wicked an further more age young at that. She never kno her days was coming after all those ppl she make suffer an spend time in prison for her selfish being. Yea man what u reep u shall sew!!!