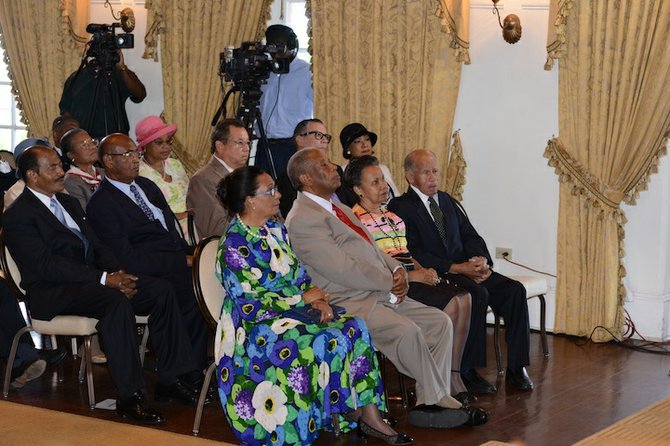 A NEW public holiday was formally established yesterday and, for the first time, this coming Monday will officially be recognised as ‘National Heroes Day.’

It replaces ‘Discovery Day’ which celebrated the arrival of Christoper Columbus to the Bahamas.

The new holiday was formally established yesterday with the signing of the National Heroes Act 2007.

The Act will also allow for the formal selection and recognition of the country’s national heroes.

Several FNM and PLP members of Parliament as well as various Senators and former politicians were present at the signing yesterday.

He said: “It really is a cause for celebration,” that National Heroes Day has at last come into effect.

“Equally important, the National Heroes Act will also establish the framework for the orderly, rational and systematic selection of our national heroes,” Mr Christie said.

“The Order of National Hero will be at the apex of the now emerging indigenous honours system of the Bahamas.

“This particular honour will be reserved for ‘the greatest of the great’, be they living or dead. Indeed this honour is really only intended to be conferred on those citizens of the Bahamas who have so fundamentally influenced the course of Bahamian history or who have given such truly extraordinary service to the nation that they deserve to be elevated to the status of ‘National Hero of the Bahamas’, a status that will carry with it the right to be known and addressed as ‘Right Excellent’.”

Appointments to the Order of National Hero will be made by the Governor General who will serve as Chancellor of the Order, Mr Christie said. The Chancellor will act on the advice of the Prime Minister after consultation with the Opposition Leader and the Advisory Committee.

“This Advisory Committee I expect to be in a position to name very shortly,” Mr Christie said.

“There are a great many persons in our society who may not be worthy of elevation to the highest rank of honour – the Order of National Hero – but who nonetheless are deserving of state recognition in one of the various classes or orders of state honours.

“I expect this new national honours system to become a reality in the near term as well.”

the three most consequential events in the whole of Bahamian history.”

Majority Rule brought about “a profoundly important liberation-experience in the life and history of our beloved country” and marked the transition from the “old Bahamas” to a “new Bahamas” - replacing minority government with majority rule, the PM said.

“January 10, 1967 was and shall forever remain one of the truly transformative events - not only in Bahamian history, but in the development of the psyche of the Bahamian people as well,” Mr Christie said.

I wonder if anything disqualifies a person, like say for example they were widely known to have participated in the drug trade either dealing directly or benefiting from the proceeds. We're all flawed individuals no one is perfect but seriously, what would disqualify someone as a nominee?

There are no Bahamian heroes, except for the common folk who have to endure the foolishness of the Bahamian governments and rulers since time immemorial.

That's why after 6 years (the act was drafted in 2007) and the clear inability to list who these national heroes are - they decided to just go ahead and have it without any heroes to name.

They also set it up to make a gigantic mistake in the near future; Christie said "living or dead". Everyone knows you should NEVER name anyone to such a lofty post as this (like a Saint really) until a few years after they are dead - this give time for "the truth and" various scandals to come to light and be debated in the public arena before somebody makes a fool of themselves.

As long as someone is alive (no matter how fabulous they are today) they have the potential to turn themselves into a gigantic disgrace (like many drug using sports stars, justin bieber, etc) - and then everyone will say "man, we shoulda never name dat one" - but it's too late then.

What about that woman from the United States I've read about and most certainly heard about that supplied our countries poor with clothes, school supplies, books for our schools and helped Urban Renewal start omputer labs. At my school I've heard about her several times and some of the things she has done. I heard that she works closely with Mother Pratt and the poor. Certainly Mother Pratt deserves such an honor. Most importantly this woman from the United States and im sorry I don't know her name is a hero in the eyes of our people she helped. She's not Bahamian but a hero nonetheless. Keep politics out of the decisions and for the sake of our people honor those that deserve it and have made a difference. If anyone knows her name can you please pet it so I may be informed.

Mother Pratt is a very giving woman, at this point in time, I don't believe she qualifies as a "hero". Indeed if "giving" were the criteria they might as well stand on the street corner and sell Right Excellencies like they sell peanuts.

There is a reason the number of names submitted for knighthood are limited, it's because these awards are special, should be thought over carefully and only the cream should be awarded. Unfortunately even those honours are sometimes politically motivated. Can you imagine a woman beater and rapist being called Right Excellent!? We'll be the laughingstock of the Caribbean

I guarantee you in 3 years there will be too many national heroes to remember or count , and before every election there will be hundreds more trotted to a poduim to be "blessed" How many stalwart consulers did PGC name the last time his leadership was in question ,,Give a Bahamian an award and they will lick your boots forever ..

Instead of asking Bahamians to "pull up their socks" and increase productivity in an effort to revive our economy, we are instead celebrating our descent into bankruptcy by declaring holidays for those responsible for such demise. Fortunately, the rest of the world, including the IMF, already view us as being on "permanent" holiday, so hopefully they will just laugh at this latest confirmation of their accurate assessment and not down grade us still further!

Young Bahamians are starting to fear holidays, they cannot even go beaching anymore. Driving down Bay Street on Sunday morning, lots of tourist about shopping and doing what tourist do, Then there is this car in the middle of Bay Street with 3 young men spread eagle across the trunk, They are surrounded by police officers who are pushing them around and searching them. The young men only have on swim trunks and are full of sand, obviously just coming of the beach. One officer seems to be writing a traffic ticket. Why in a traffic stop do young men have to be hauled from a car and treated this way? What can men wearing wet swim trunks have on their person that they have to be searched and manhandled in this fashion in front of scores of camera toting tourists? Nice job guys, you are well on your way to creating another generation of angry, pissed off Bahamian men! Join the line for your 'heroes; award! Stand right behind the minister of National Security.

I don't think young men who would get up early on a Sunday morning to go in the sea are the type who would be into the night club violence. On into murder. Y'all two would probably like to see every Black person in the Bahamas an in the world, for that matter, back in chains. When police harass innocent people too often, they get turned off and become anti-social.. The majority of young people in this country are not into crime or violence and shame on y'all two for trying to make it seem that way. When you watch Alaska cops or Minnesota Law they have their share of crime. In Alaska there are a lot of house break-ins with violent assaults and in Minnesota a lot drug related crime..also in Las Vegas...But in the three areas most of the perpetrators are White..so don't try make it as crime is a Black thing. The law still is ' innocent until proven guilty."