Hitmen Walk Away With Title 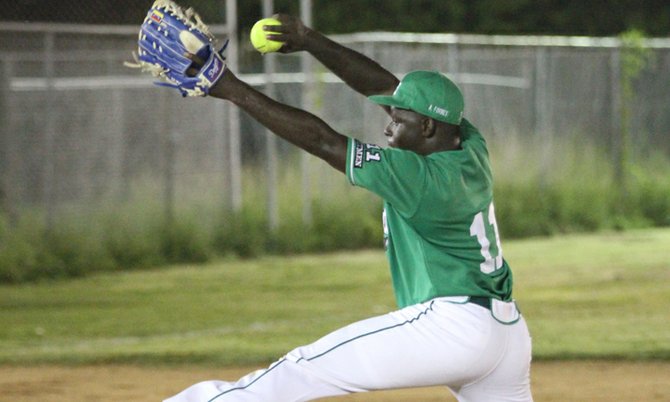 After falling short as a player/coach with the sponsorship of Dorin United for the past two years, Stevens took over the reigns from Erin Adderley this year and Thursday night under the new sponsorship of Arnette’s Sporting Lounge, the Hitmen prevailed with a 5-4 decision over the Andre Gardiner Construction Buccaneers.

The win capped the best-of-seven championship series that literally went right down to the wire in the seventh game and in the seventh inning. Thanks to Forbes’ two-hit, nine strike-out performance, Stevens and the Hitmen celebrated as double champions adding the title to the pennant as the regular season champions in the Banker’s Field at the Baillou Hills Sporting Complex.

“First and foremost, I want to thank God,” said Stevens as he tried to hold back the tears. “It’s been a long time coming. We’ve been fighting for a long time and we finally came through. It’s a great feeling. God is good.”

Forbes, who returned to the line-up after sitting out game six because of an ejection at the end of game five, helped his own cause by leading their offensive attack with a 2-for-3 appearance, driving in two runs and scoring another. He was assisted by Jameko Sands and Hosea Hilton, who both went 1-for-3. Sands also scored a run. He noted that after their arch-rivals Truckers opted not to return this year to defend their title, that left the door wide open for them to be the kings of the league and they proved their worth, despite having to go the distance with the Buccaneers.

“We just showed our resilience in not giving up,” Forbes said. “We knew this team was going to come out and give us everything that they had, but we were determined to prove that we are the team to beat in this league without the Truckers.”

With one out, Martin Burrows hit a fly ball that enabled both runners to score, the first on a sacrifice and the other on an error to push the Hitmen up for good 5-3.

In the top of the seventh, the Buccaneers responded as Garfield Bethel walked, stole second and third and scored on an error for the final margin, 5-4. That’s because Forbes managed to retire the rest of the Buccaneers in order.

As a result of his performance, Forbes could have easily been named the most valuable player. But that honour went to Jameko Sands for his offensive attack, leading the Hitmen with a total of 12 hits in 25 at-bats for a .480 batting average, driving in eight runs and scoring five times. He also had a home run.

“It was good to win the championship. We worked so hard for it,” Sands said. “But I was glad that I won the MVP. I think it was a team effort and we really deserve it, so I’m going to enjoy it with my team-mates.”

In a showdown that befitted a game seven, the Buccaneers began the game by scoring the first run in the top of the first when Lamar Watkins led off with a double and with the bases loaded, he scored on Adrian Pinder’s RBI sacrifice fly.

The Hitmen came back in the bottom to go ahead 2-1 as Keiron Munroe led off with a walk, moved to third on Alcott Forbes’ double and they both came home on Jameko Sands’ two-run single.

Arnette’s Sporting Lounge scored another run in the third as Richard Bain got hit by a pitch, advanced to second on an error and came home on another to push their lead to 3-1.

Andre Gardiner Construction, falling short down the stretch in their final comeback bid, was led by Watkins’ 2-for-4 outing.

Andre Gardiner Construction’s manager Mike Dillet, who was building the team for the past five years for this chance at the top of the mountain, said although they played as hard as they could, the umpires didn’t allow his Buccaneers a chance to play up to their full potential.

“I’m happy with the way we played, but I felt the league took two games away from us with poor officiating,” Dillet said. “I don’t mind losing on the field, but it’s very frustrating when umpires take games away from you.”

Now the Buccaneers will have to regroup for next season, while the Hitmen will go on to represent the NPSA along with the Sigma Brackettes in the Bahamas Softball Federation National Round Robin Tournament slated for October 31 to November 3 at the Baillou Hills playing field.

Also on Thursday night, the Brackettes had to go to the seventh game of the ladies’ series before they prevailed with an impressive 11-1 win over the pennant winning Proper Care Pool Lady Sharks behind the pitching of Ernestine Stubbs and Zella Symonette’s MVP performance.