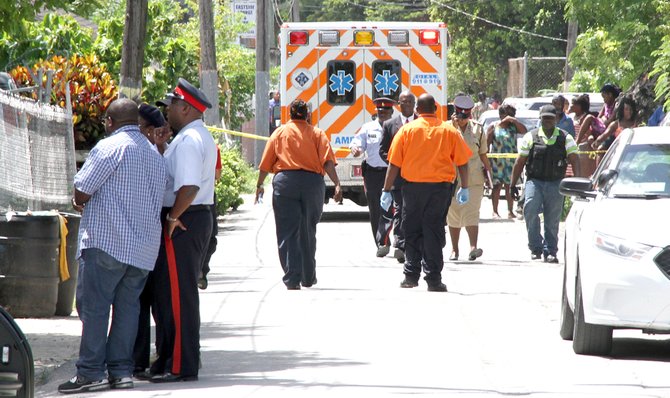 The shooting in Fowler Street

POLICE have reported a double shooting this morning in Kemps Bay, Andros.

According to police Superintendent Stephen Dean, the shooting occurred shortly after 8.30am.

Both victims were being flown into New Providence for medical treatment. Mr Dean said it was not expected that their injuries were life threatening.

A team from the police force was on its way to Kemps Bay to investigate.

It comes as the country suffers 11 murders in 12 days, with another murder last night. The murder count has now reached 80.

Around 9.50pm, the victim was playing a game of dominoes with a group of men at White's Road off Kemp Road, when he was approached by two men in a dark coloured Honda Accord vehicle, who shot him repeatedly and drove off.

The man succumbed to his injuries at the scene. Investigations are ongoing.

That murder came just hours after a teenager, named locally as Aaron Thurston, was shot and killed during a game of backgammon in Fowler Street yesterday afternoon.

Bamboo Town MP Renward Wells's brother Cabrio, 31, was also injured in the shooting - he had been passing by when he was hit by a stray bullet that was fired.

He was shot in the stomach and was last night listed as critical in hospital.

This morning Renward Wells told The Tribune the family were going to see his brother today.

He had been standing in front of his home when three men approached in a black Honda Accord and gunned him down.

This is true and this will hurt tourism more than anything. People will not return to a area where they encountered crime or didn't feel safe while they were there. Would you?

Actually the U/S violent crime rate has been trending down the last ten year, it has to do w/ the birth rate stabilizing and career criminals aging . The most increases in the U/S are w/ the minorities that have a 70% illegitimacy rate , but even factoring that in violent crime ,,ie murder ,attempted murder etc has decreased in the U/S

Because sentence against an evil work is not executed speedily, therefore the heart of the sons of men is fully set in them to do evil. They that forsake the law praise the wicked: but such as keep the law contend with them.

Yes thats it quotes from the book that said slaves ,multiple wifes ,stoning people to death ,women having no rights what so ever will fix it ..There is a God but the bible is a period piece written by the Jews about their struggle w/ the Romans of course they named themselves the chosen people the downtrodden always do ,and all three monolithic religions,Jewish ,Christians,Muslim , believed the same thing until it came to who the Messiah is then they all started killing one another and it goes on and on today ..

sorry should be Judism

I deem you, King Solomon II. Words of wisdom my brother....

Correct me if I am wrong but isn't the number of persons who have committed murder over the past 10 years and who are in jail less than half the persons who are still out or who have themselves been killed? Also TRUE OR FALSE?

While more than 100 murders have been committed each year over the past 5 years, only about 10 (T E N) persons go on trial for murder each year?

does that mean than at least 450 persons who have committed murder over the past 5 years have never been on trial?

somethin to think about

The blood of our young people cries out to God and our nation has become such a worldly society, forgetting the things of God and even the church, in some respects have laid in bed with the world. The minute you see a pastor admitting that he had sex in the house of God, whether its with his wife or not, you know the church is in trouble. God's house is a house of prayer and worship and not carnal things. Nothing that happens is a surprise to God and so some things He has allowed to happen. He says in His word that if His people would only humble themselves and pray, then will we hear from heaven and He will heal the land. The people are praying and they are congregating in the masses at a different kind of church that rory spoke about...being indoctrinated by foreign spirit and culture, without even realizing it. The crime problem is not anything that man can fix. It is a spiritual problem and there is a spirit of death and murder hovering over us, and I tell you today that you need to put the blood of the lamb on your door post like the Israelites did in the Bible days, so that it would pass over you and your household - and not make a visitation. Blessed is the nation whose God is the Lord. We, as a nation, are not representing him very well. We have ruined his reputation and we're paying the price. Pray for deliverance and a renewing of our minds. Too much wickedness is rampant in the land and it is breeding this awful spirit upon us. Wherever He sees the blood, He will pass over you...

Are we not our own people w/ an identity and culture ,we always going on about ' I is a Bahamian ' but then we want to blame the bad we do on'' foreign spirit and culture" Its like the mother that says here murdering pillaging son was a good boy untill he started "keeping bad company "

Why do we as Bahamians always quote biblical passages whenever we are faced with challenges? We can quote the entire bible and nothing will ever happen without positive action. Geez! Everyone wants to have a 40 day prayer something then sit back and expect for God to miraculously answer their prayers. I find this type of action to be lackadaisical and at the same time hypocritical-Especially since these same so called prayer warriors are the main culprits behind petty criminal activities or their children are involved with some criminal activity.

God can help you move a mountain put you got to bring the shovel and strong back ...

Correct me again if I am wrong, but none of the murders that were executed (because many of them are executions) this year involved a licensed gun or a shot gun. In fact the only two times shotguns were mentioned in the news in recent times was when the MP, Leslie Miller, used his licensed gun to chase off copper thieves, and in the incident where the group of teenagers were robbed by thugs in the village road area. So where are all these handguns coming from. Since the police cannot seem to get a grip on the killings then maybe they should go after the guns. That was the purpose of the gun court being established. And even when a person is charged with murder he is charged separately on gun possession or illegal use and sent to jail. That way he doesn't get out until his murder case comes to trial.