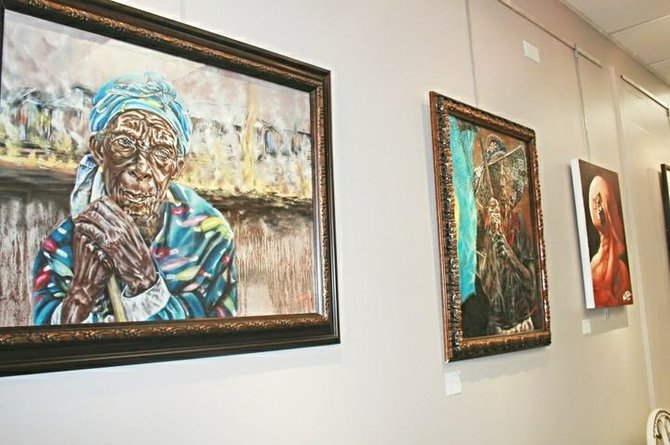 THIS year’s Transforming Spaces Art Tour has come and gone, but for the next few weeks enthusiasts can marvel at the “high-water mark” left by the multidisciplinary super group of local and international artists who came together for the event’s 10th instalment under the theme of “Water”.

Works from more than 50 artists were curated to present a gargantuan body of art every bit as vital and wondrous as the element of water itself.

While the tour has already established itself as the premium offering on the local art scene, the entrance of guest curators and regional artists at each participating gallery created a deliberate visual experience that eclipsed expectations.

In his statement on the piece ‘Majesty’, Bahamian artist Sony Jean-Jacques said: “Water is perhaps the most important element we have on Earth. Our planet’s surface is covered by 70 per cent of it. We are born of it from our mother’s womb and our bodies are made up of 70 per cent of it. We can never survive without consuming it, it is a crucial resource.”

Indeed, works on display represent a crucial cultural resource for both the country and the region with collaboration and process taking centre stage.

At PopopStudios, the mother and son duo of Sue Bennett-Williams and Jason Bennett teamed up to share their collective ‘Journey’ that sprawls along the walls of the main house through sculpture, mixed media paintings, and photographs.

The gallery held a curatorial advantage over the other spaces on the tour as it had multiple rooms and Popop’s lush grounds at its disposal.

Most tour-goers got caught up in the works by the Williams duo and used most of their time indoors; however, outside artist Nadine Seymour-Munroe continued her series documenting her washing of feet. The spiritually-themed series will be completed in 2015, with photographs by Lisa Wells.

Tucked away in an adjacent studio on-site is a video installation by Joscelyn Gardner, entitled “Omi Ebora”, that envelops participants in the sensory experiences of slaves being trafficked at sea. To get there, it is recommended you cross over ‘Aquapop’, the environmental project by Hillary Booker that has transformed the site’s derelict pool into a functional ecosystem.

Hillside House curator Nicole Smythe-Johnson approached the theme of water through time, inspired by the space’s authenticity and deep-rooted history in the city scape of Nassau.

At Liquid Courage, curators Holly Bynoe and Tessa Whitehead split works between the upstairs gallery and the store’s warehouse on the ground level.

Ms Bynoe’s depth is unparalleled on the tour as she presents a succinct reflection on regional challenges of truth and language, all under the theme “After The Flood”. And although it is Ms Whitehead’s first time as a curator, she does not disappoint.

Unfortunately, the art housed in Liquid Courage’s warehouse has already been taken down. If you did not stop by last weekend, you missed an interesting mash-up of flair from conceptual art heavyweights Blue Curry, Heino Schmid and Bermuda artist James Cooper, entitled “The Reef”.

You also missed Blue Curry’s tongue-in-cheek critical response to foreign direct investment via Baha Mar advert. The wall poster of the “Bahamian Riviera” ad loomed over the trio’s installation as a silent reminder of the shotgun wedding between culture, identity, and tourism in the Bahamas, and undoubtedly the wider Caribbean.

At the D’Aguilar Art Foundation, another first-time curator, Dede Brown, exhibited impressive sculptural works from John Beadle and Del Foxton, along with intricate illustrations from Attila Feszt and Andrew Carey.

At the grounds of the Antiquities Monuments and Museums Corporation’s, Collins House, architectural students from the College of the Bahamas designed and constructed two temporary pavilions to house works.

At Doongalik, curator Heino Schmid balances multiple installations across a variety of media. For Yutavia George’s “Carry Me”, one-gallon jugs are piled ceiling high on a rusty shopping cart to provide an unmistakable social commentary on the issue of potable water and its access in the Bahamas.

Curator Michael Edwards revealed that the partnership born out of the tour between AMMC and COB has blossomed into a permanent site for students to realise their design concepts, hinting at the potential for future art fairs.

Not to be passed over, the Realists at the National Art Gallery of the Bahamas represented a vibrant traditional art scene that appears to be slowly becoming a fringe group within a wider modern visual art movement.

Curated by Kim Smith, who also created his first conceptual piece out of a functional need to define the corner space, the showing was small, but not lacking in technical skill, with impressive paintings and artisan work on display.

It was a refreshing breather from the concept-heavy galleries on the tour that can be a bit overwhelming to digest at the tour’s fast pace.

Painter Lemero Wright said: “There is more support now (for artists). We are not quite there yet, but we are getting there. We are starting to really help and support each other as a community, to get exposure.”

Painter Elvin Carey said: “I came back (to art) because Max Taylor tracked me down and asked me what I doing.”

Both painters have works on display at NAGB.

Lastly, I would be remiss if I did not mention the impressive collection of video installations displayed at nearly every gallery. The small and measured growth of this medium in the Bahamian art world is especially rewarding as more artists pick up the format to extend their expression.

Short review even shorter – do not miss next year’s tour. To be certain, there is abundant opportunity for aspiring artists. And it would appear that the community is making good work on unravelling the question, ‘Is there access?’