Low Turnout For Protest Against Power Costs In Grand Bahama 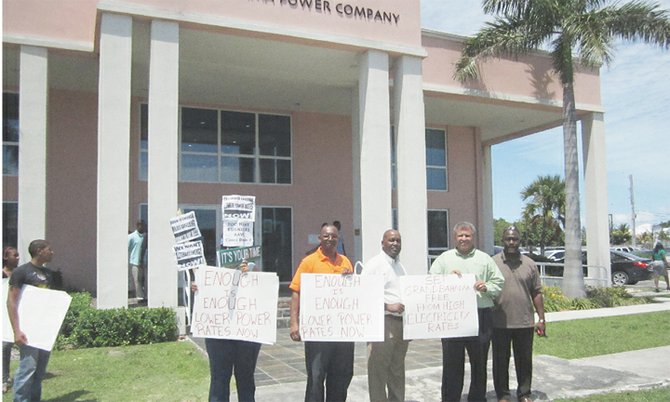 The Coalition for Concerned Citizens (CCC) is determined to continue its fight in lowering the cost of power on Grand Bahama, despite a low turnout of supporters at Tuesday’s demonstration.

Pastor Eddie Victor, convener of CCC, said he was not discouraged at all by the small turnout at the protest, held at the Grand Bahama Power Company Headquarters on Pioneers Way.

“The turnout could have been much better, but what is clear is that we have to continue with our voice when it comes to the need for electricity rates to be lowered.

“We have nothing less than a crisis in Grand Bahama, with hundreds of people living without power – some as many as a couple of years, as we get more information from the public,” he said.

According to Pastor Victor, CCC has been receiving calls from many disconnected people on its hotline and has gone out into the communities. “What we are finding out is that in communities across Grand Bahama there are pockets of people who are living without power,” he said.

Pastor Victor said that disconnected customers at the Power Company lose their deposits after 60 days.

“In our meetings with the Power Company – we were told that disconnected customers whose bills are past the 60-day period, your deposit is forfeited and absorbed into your bill, and you become classified as terminated – we don’t know how many terminated customers there are in Grand Bahama.”

He stressed that the rates must come down to a level that is affordable.

He said that while the government and the GB Port Authority seem committed to bringing down the cost of power, the GB Power Company remains indifferent.

In March, two meetings with the GBPC were organised by Minister for Grand Bahama Dr Michael Darville and the Grand Bahama Port Authority to address concerns.

“We were supposed to continue to meet but it is our understanding that the Power Company does not want to continue the meetings. We know that people in a meeting may not have the same views, but when you say you are going to stop talking, what the Power Company did is very disrespectful to the government, the Port Authority and the Coalition, which represents residents and businesses.”

He added: “We are not against the employees of the Power Company, but what we are saying is that their policy is not good for Grand Bahama,” he stressed.

He believes the concerns regarding the bonuses given to EMERA executives are valid. “Keep all things in perspective, EMERA owns the GBPC, so the philosophy of EMERA then becomes a concern for us here in GB because EMERA is the parent company.

“They will tell you themselves that they have to make a profit to satisfy its shareholders, but really the greatest partnership in the company is with the customers (the people and businesses) who should also be given equal priority.”

Mr Victor said the coalition will not give up the fight; having launched a petition drive, staged protests, and initiated boycotts, which called for voluntary blackouts and non-payment of bills.

“We are not going to disappear,” he said. “We have collected somewhere in the range of 7,000 signatures for our petition, and will step up our efforts to reach our goal of 10,000 in the next two weeks. We are going to continue with the boycotts because we have other planks in our strategy that we have not used and we will implement,” Pastor Victor said.