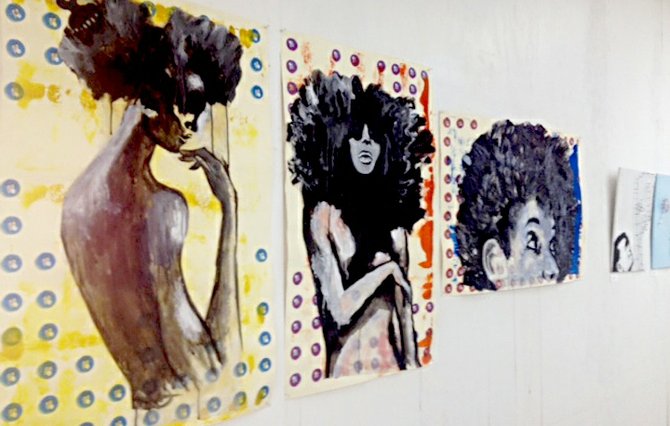 SECOND-YEAR College of the Bahamas (COB) students ended their semester last Thursday with an exploration of social issues through art.

Working from social issues regarding race, culture, sexuality, to addressing personal histories like those involving trauma or loss, the artists explored different creative processes via painting and ceramic media.

As the curator of the show, Jodi Minnis said the exhibition was a way to introduce the students to a gallery setting and real world art exhibitions.

The name of the exhibit, said Jodi, is an abbreviation “Pro Society” – an art group at the COB. However, she said students who participated in ProSo were not necessarily part of Pro Society or any other specific group.

“We decided to label all student exhibitions outside of the Pro Society as ProSo. The students, who are art majors, are a part of Pro Society, however we don’t want them to be mixed up, because there are other majors such as Biochemistry, Mass Communications, Education and others that are part of ProSo as well,” said Jodi.

With her own paintings and one sculpture series on display, Jodi said she is happy with the outcome of the project.

She said her series of paintings entitled “Censor Me Destroy Me”, white mixed media acrylic and charcoal paintings, depict the traditional saying that goes, “Women should be seen and not heard”.

“I feel as though when you censor a woman or an individual on the whole it destroys them on the inside, because they have no way of expressing themselves. When they grow up learning to be seen and not heard, they don’t have an outlet so they keep it all bottled in, which is hurtful to the soul,” said Jodi.

Having two rooms to exhibit the artworks, Jodi said her overall goal was to have the art complement the aesthetics of the space.

“We have the traditional gallery in the S9 room and I wanted the work in there to be the more clean cut. The second space, S1, has the more edgy, colourful, and pop type of feel. Students have works in both rooms, but you would never guess that they are from the same person because of where it is being presented,” she said.

With most of the participating artists being in their final year at the college, Jodi said the show was a good way to help them transition from being students to feeling the real pressures of working for an exhibition and learning what is needed in terms of preparation.

She said it was also a very good learning experience for her because she actually wants to pursue curation going forward.

Describing her pieces to Tribune Entertainment, student artist Celeste Harding said she worked with threads, nails and a fishing line.

“I took this very fragile string (fishing line) and structure that looks kind of see-through and used it over and over to dense it up a little bit. When you walk into the room you see it, but it is like a spider web and you can almost accidentally walk into it,” she said.

“To play with the shadow, I did a process to make 3-D forms. I played with that aspect and then I put it all on paper and dealt with shadows that you cannot touch; all that was in play with my pieces this semester.”

Nineteen-year-old Seth Bastian said his piece addressed topics like cultural identity. “It looks like a guy from an African tribe and it’s really aggressive,” he said.

“The technique I used was very abstract and not very methodical. This is acrylic on stretch canvas.”

He said he believes art in the Bahamas is growing and is starting to reach people his age. “The biggest thing with young artists is that it is hard to see it as a feasible career path in terms of how much money you are going to make and things like that.”