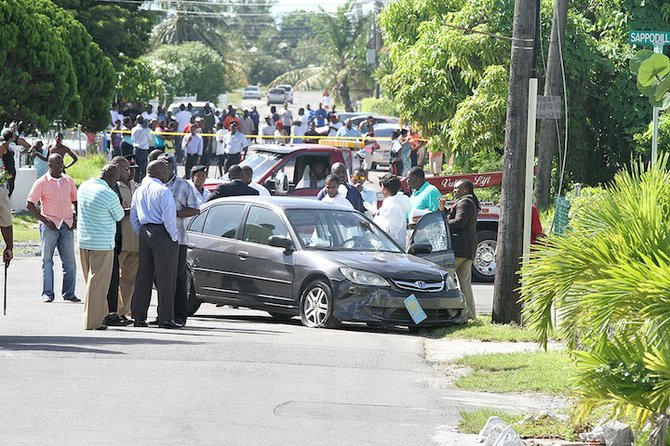 The scene of the shooting in Pinewood. Photo: Tim Clarke/Tribune staff

Police are investigating five separate shootings in less 12 hours that left two women and two men dead and another man in critical condition in hospital.

The latest incident took place shortly after 8.30am.

According to reports, the victim was driving through Pinewood Gardens when he was shot multiple times, while in his vehicle, by two men attempting to rob him. He died on the scene.

A few hours earlier, around 5.30am, another man was shot on East Bay Street as he was walking to his car, from a nightclub.

He was taken to hospital where he is listed in critical condition.

Two hours earlier, police were on the scene of another murder, this time in Cordeaux Avenue area.

According to police, two men where involved in an argument inside a nightclub in the area, when one of the men left the club and returned a short while later.

When the suspect attempted to re enter the club, he was stopped by a woman and another man.

The suspect then produced a handgun and shot the woman, the owner of the nightclub, in the chest and the other man in the abdomen. He fled the scene.

Both victims were rushed to hospital, where the female later died of her injuries.

An hour before this incident, police were called to the scene of another murder on Baillou Hill Road.

Police say a man and a woman were on a motorcycle, when people in a grey Nissan pulled alongside them and discharged several shots. The woman, who was on the back of the vehicle, was shot in the head. The driver of the Nissan then hit the motorcycle with the car, causing the man to fall. One of the men then got out of the car and stole the motorcycle.

A few hours later police recovered the motorcycle in the Yellow Elder Gardens area. A man and a woman were arrested in connection with that incident.

According to police, the victim was standing outside a residence with another young man when two masked men approached him. the masked men then produced handguns and opened fire. One of the men managed to escape but the victim was shot multiple times. He died on the scene. The shooters then fled the area in a black car.

Police are appealing to anyone who may have any information in these murders to contact police on 911 or 919, the Central Detective Unit at 502-9991 or Crime Stoppers anonymously at 328-tips.

Welcome to Paradise, the country of sun, sea and senseless slaughter!

I grew up in the Bahamas and now live in America. I haven't been home in three years and I'm afraid to bring my wife and kids to visit. The random voilence here is unprecendented.

Soooooooooooo where's BJ and his new cars???????, Lil Brave and UR2.0 and Perry??? Who are committing these shootings and where???????? Get a SWAT team in there and root the bandits out. What are our armed forces good for except whine about long hours and overtime?????? Except the powers that be are in on this carnage......... HMMMMMMMM

You can't be serious.

tresemme70, funny shit still laughing, can't do a thing in the country, a fish stinks from the head down, still all for me baby, da rest can catch as catch can (is that Vanderpoole Wallace in the picture????)

There are no words

We have wild animals living amongst us....and when wild animals injure and kill human beings they need to be put down!

i'd say a major problem is that the criminals have infiltrated many sectors of society. Crooks in politics, crooks in the police, and crooks as regular civilians. Not saying everyone is a bad guy but where do you start to sort the good from the bad?

and tomorrow Brave, Christie and the rest will issue the same statement "CRIME IS DOWN"

This is a serious problem, and it is rooted in the current morale and values of many of our people. Consequently, the solution will have to be one that aims to improve the morale and values of all Bahamians. And to be fair, because the nature of the problem, it is very difficult for any government to administer a quick solution. Our country is so horrible right now, most of the people complaining about the level of crime, are just as angry and potentially just as dangerous as those criminals that do get caught. To many Bahamians have completely abandoned the idea that one should "do unto others as you would have them do unto you." In the Bahamas, it's "do unto others as you see fit" and things like love and care are things thought only be in the movies. There is a selfish, greedy, "sense of entitlement" kind of thinking that needs to change yesterday, if we are to affect change in the vicious crime trend we see today.

Ephesians 6:12 For we wrestle not against flesh and blood, but against principalities, against powers, against the rulers of the darkness of this world, against spiritual wickedness in high places. ** There seems to be a powerful spirit of murder, mayhem and violence over this country of the Bahamas. Lately women have also become the victim of this spiritual warfare and a number have died at the bullets of killers. Again, suicide has been added to the weapon being used for destruction and to claim souls. When the police or authorities seem to have crime and murders under control in New Providence, there will be killings in Grand Bahama or in one of the family islands. And so the nation continues to mourn for the dead while the police collect dead bodies off the street.

Where are our spiritual leaders in times like these? WHY do they remain silent when this is their time to speak up? They seem to have advice on other issues like gambling and equal rights but who is the Daniel among us who can go and tell the government what they are doing wrong and what needs to be done to stop this attack on our very right to life. Young men and women being slaughtered in the streets day and night like dogs. The police alone cannot stop this. Unfortunately this is not only happening in the Bahamas but in many major cities around the world. Chicago had 40 plus shootings in one weekend of which 30 were murders. Just this weekend police in another US state shot an unarmed, black teenager multiple (14) times, leaving his sprawled in the street dead. Similar situations in many Caribbean countries, with violence and murder. Is satan to and fro throughout the earth, again, seeking whom to devour and who to destroy? . . 11Put on the full armor of God, so that you will be able to stand firm against the schemes of the devil. 12For our struggle is not against flesh and blood, but against the rulers, against the powers, against the world forces of this darkness, against the spiritual forces of wickedness in the heavenly places. 13Therefore, take up the full armor of God, so that you will be able to resist in the evil day, and having done everything, to stand firm.….

Hmmm...might not be such a bad idea but I don't know if he could do it. He would constantly be torn between obedience to God and his obligation to execute the will of the people.