Americans Killed In Plane Crash Were Investors In Freeport 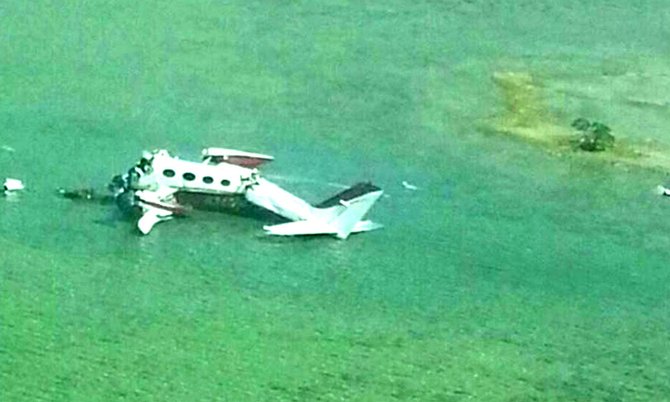 THE four Americans killed in a plane crash in Grand Bahama are all senior timeshare executives of Aqua Sun Investments Inc, a Florida timeshare corporation with major investment ties in Freeport.

Robert Dean Carlson, vice president of Aqua Sun Investments Inc, was piloting the twin-engine Cessna 340 aircraft when it crashed five miles northwest of Freeport on Monday morning. On board were lawyer R Michael Kennedy, managing director of corporate; Terry Hanes, head of sales and marketing; and Matt Sokolowski, head of IT.

Family members of the victims were expected to arrive in Grand Bahama on Tuesday to identify the remains. Up to press time on Tuesday, police still had not officially released the identities of the men.

Mr Carlson and Mr Kennedy flew to Grand Bahama regularly to the Island Sea Resort, a timeshare property in Freeport, which is owned by Aqua Sun Investments in Ormond Beach, Florida, The Tribune understands.

Mr Carlson took off from Ormond Beach Municipal Airport around 8:30am on Monday. The aircraft went down in shallow waters, five miles northwest of Freeport.

It is believed that everyone on board was killed instantly when the six-seater aircraft plummeted around 10am. The plane was extensively damaged.

BASRA, the Royal Bahamas Police Force Marine Unit, and the Royal Bahamas Defence Force encountered challenges getting to the wreckage because of the low tide and extremely shallow conditions. The bodies were recovered from the crash site around 4pm on Monday.

The Tribune went to the Island Seas Resort on Tuesday, but the resort manager was leaving to assist with the identification process.

Workers are shocked by the tragedy.

“They were family. We are a very small resort here and everyone is family here,” said an employee who did not want to be named.

According to the Daytona Beach News-Journal, Mr Carlson was a timeshare businessman and entrepreneur. He and Mr Kennedy were also involved in the Georgian Inn Beach Club, an oceanfront timeshare property in Ormond Beach.

Mr Kennedy, who lives in DeLand, Florida, has a law office in Ormond Beach. He was an associate of Carlson, and his longtime attorney for the timeshare businesses in Florida, and in the Bahamas.

When contacted Tuesday, a representative of Aqua Sun Investments said the company would release a statement on the tragedy on Wednesday.

The cause of the crash is still not known and officials of the Civil Aviation Department are in Grand Bahama investigating.