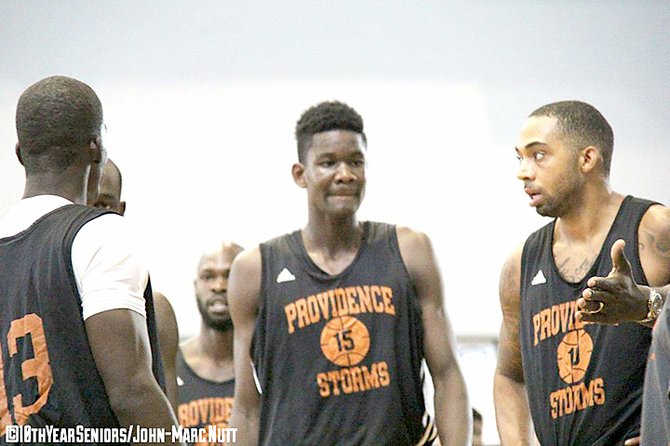 FOR the third time in the 2014 edition of the Bahamas Basketball Federation’s Summer of Thunder series, a local team has topped a visiting NCAA programme.

The Knights, led by CR Walker Knights’ head coach Trevor Grant, featured a cross-section of collegiate and local talent on its roster which overmatched the small Division III school from Walla Walla, Washington.

Whitman was led by a game high 36 points from Matt Mounier, who also added eight rebounds. Evan Martin finished with 16 points and seven steals, Jackson Clough and Dominic Clippi each finished with 13 points while Tochi Oti chipped in with eight.

Whitman took advantage early in the first quarter and ended the period with five straight points from Mouiner to take a 23-18 lead. A closely contested second quarter featured five ties and five lead changes as the Missionaries clung to a one-point lead at the half.

Tied at 48 with under one minute left to play, Jacobs gave the Knights a lead with a layup only to have Mounier respond with a three pointer that just beat the buzzer for a 51-50 lead.

The Missionaries tied it at 81 early in the fourth when Martin made a pair at the line.

The Knights responded with an immediate 11-0 run to take control of the game for good.

Jacobs sparked the run at the 6:51 mark with a layup, followed by a jumper from Mitchell, a fast-break dunk from Moss, a pair of free throws from Rose, layup from Levarity and was finally capped with another layup by Rose.

Martin ended the Knights run at the 3:50 mark when he split a pair at the line.

It would spark a Whitman run of their own to come within two, 94-92, but Lippi missed the go ahead three pointer with 1:27 left to play and they would pull no closer. The Knights closed the game on an 8-0 run.

This year, the Providence Storm have recorded two wins over visiting teams. They defeated the Alabama State University Hornets, 88-76 and followed with a shocking 84-83 win over the North Carolina Tar Heels.

In the 2013 edition, local teams achieved unprecedented success, when they totalled three wins in the summer-long series against NCAA programmes.

The Giants won their second game of the series when they followed with a 77-74 win over Bradley University.

In the other win for Bahamian teams, The Mailboat Cybots topped Hampton University, 85-79.

The Summer of Thunder concludes August 25.