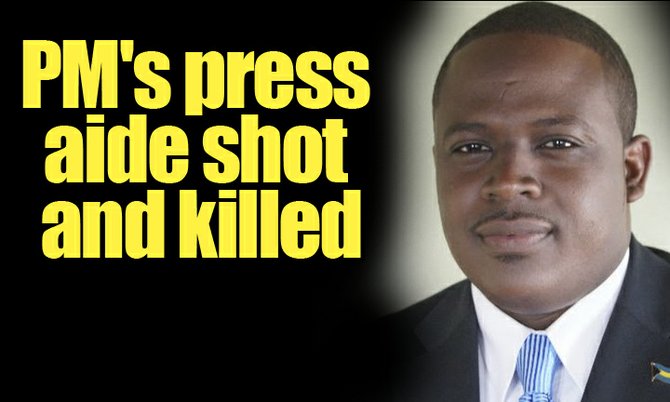 7pm UPDATE: POLICE have made four arrests in the investigation into the murder of Latore Mackey. According to reports, between 1:30pm and 3:20pm on Tuesday, a team of officers from the Drug Enforcement Unit acting on intelligence arrested a 24–year-old man of Palmeto Avenue, a 22–year-old man of Young Close, a 20–year-old man Bimini Avenue and an 18–year-old male of Young Close in connection with the murder.

LATORE Mackey, Deputy Director of Bahamas Information Services and Press Secretary to the Prime Minister, was shot in the neck and killed early yesterday morning.

His death was the fifth in less than 36 hours and brought the country’s murder count to 83 for the year, according to The Tribune’s records.

The killing took place around 4:30am on Market Street.

Officers responded to reports of gunshots being heard in the White Road area and when police arrived on the scene, they discovered Mackey, 37, slumped over the wheel of his government issued vehicle with a gunshot wound in his neck.

He crashed into a utility police after being shot and was pronounced dead at the scene.

Assistant Commissioner of Police Anthony Ferguson said police have no motive for the crime at this time.

A resident of the area, who wished to remain anonymous, told The Tribune that she heard shouting between two men and three gunshots before a loud crash. When she looked out of her window she said she saw a man slumped over the wheel of a jeep with “blood all over the air bag and dashboard”.

Mackey was also the owner of the Blue Reef Sports Bar and Lounge, a karaoke bar on Saunders Beach.

A Tribune source said the victim was reportedly dropping an employee from the bar home in the area before he was killed.

Speaking with the press, Prime Minister Perry Christie said he was “shocked” and deeply saddened” to hear of the brutal murder of a man he considered not only a colleague, but also a friend.

“I was shocked, absolutely shocked when I heard what happened,” Mr Christie said outside the House of Assembly.

“When I arrived back in the Bahamas yesterday (Sunday), as is usual the Commissioner of Police (Ellison Greenslade) met me and as usual I would have asked what has happened in the Commonwealth and he indicated to me that it was a very heavy weekend, meaning that there were shootings and killings and that in itself distressed me. So going into last evening I was preoccupied with the thought of what it is we have to do by way of strategies and crime.”

Mr Christie said he got to know Mackey in the lead up to the 2012 general election. He said he helped Mackey get a job with BIS after the Progressive Liberal Party won.

“(He) appeared to be a person of equanimity, he is calm, just no violent thoughts or expressions, so you least expected to have him the subject of the kind of horrid incident that happened with him,” Mr Christie said.

“So I was shocked, but again the question for me is one beyond my friend, the question is unless we are able to come to grips with what is happening at the level of the streets we have a real problem in this country that goes to the root of how we react one to one another. Because it is easy to believe that it is localised and retaliatory where, you shot me and I shot you, but when you see it now begin to stretch and extend itself to people who you least expect to be involved in any kind of underhand activity, who may have just been a victim of circumstance, then you know we have a lot of work to do and a lot of work to do in the immediate future.”

According to Mackey’s Linkedin profile, he is a member of the Bahamas Plays and Films Control Board. He was also once a member of the now defunct National Development Party (NDP) before joining the PLP.

Fort Charlotte MP, Dr Andre Rollins, also expressed condolences over Mackey’s death. Rollins was once leader of the NDP but left the party to join the PLP before Mackey became a part of the group.

“I’m very saddened to learn of the very tragic passing of Latore Mackey. He became a member of the NDP at a time when I was no longer active. Nevertheless, he was a young man who was very much interested in trying to bring about changes in the government,” Dr Rollins said.

Anyone with information on this murder is asked to contact police at 911 or 919, the Central Detective Unit at 502-9991 or Crime Stoppers anonymously at 328-TIPS.

Step 1 - talk to the person who he was dropping home.

If it was a young lady then the most likely scenario is her stupid thug boyfriend was angry that a man was droping his girlfriend home at 4:30am...

Here's a guy who purportedly owned a sports bar and lounge on Saunders Beach and was sucking on the nipple of Public Treasury for salary and benefits in excess of $100,000 per year, all the while with the full blessing of Christie. Can't help but wonder who his partner(s) was (were) in his other full-time job selling highly profitable (and possibly duty exempt) spirits at night.

Hey fool: how many businesses did Brent Symnonette own while he was DPM...u sound like a jacks$$

I don't recollect Mr. Symonette ever having a full-time job with government and actually being involved in the day-to-day running of any of his own businesses. I do remember Mr. Symonette jokingly claiming from time-to-time about how underpaid he was as an elected official (MP) generously giving of his time to our country in exchange for political influence.

So the DPM is not a full time job? In addition to being an MP and also a member of the cabinet? Where is your creditability? You have more than a memory problem. Smt

"So going into last evening I was preoccupied with the thought of what it is we have to do by way of strategies and crime.”

Does this clown ever "listen" to himself?

I thought the PLP election campaign was that they knew what to do and had stategies to eliminate crime.

So this guy was using his GOVERNMENT ISSUED and plated vehicle to taxi his non-government employee home from work. I know it is irrelevant in the grand scheme of things, the man is dead, murdered...but still...another fine example of how our culture of lawlessness carries on.

Yes this is another very sad tale for the year, but foolishness has to be identified and stopped.

Why would a government sports utility vehicle be on the road at 4AM on a Monday morning? Was the person on vacation or where they expected to be at work from 9AM o 5PM that day? And why does a private citizen have a government issued gas guzzler? Couldn't they concentrate their ourchases on economy cars like the swift? I've also seen government vehicles with I love KFC stickers on them. Isn't there some policy against that? If they win does the money go to the treasury?

Lets just assume he was issued the car because he is always on call in the event there is breaking news. So you are saying he should have left the red plate at home then go for it if he had gotten a call?

not sure Mr. Keith Bell, Min. B. Nottage should ever run for MP again... I guess he should run somewhere else.

Unbelievable. Another tragic murder. Who gives a shit what car he was driving.

But just typical of this governments mentality that it takes a killing of ONE OF THEIR OWN that only NOW they need to change things and do something.

I guess the rest of the country and Bahamian brothers and sisters who they dont know and who een in the loop could be damned.

I am curious- what did this young man do for a living before the 2012 election? Was he already a Director at BIS? For the past months i have been saying that Christie needed a press secretary. I didn't know he already had one! And as sad as this story is- tragic really- even without the details. It really is wrong for the man to be using the government car to conduct personal business. It is what it is.

This senseless killings and if the powers to be are serious, they can curb it. There are so many ways, but it call for honesty and integrity of those in charge. On a further note, too many government vehicles are being used as pleasure transportation, jitney and the like after hours. Just a small change that should be implemented immediately. Are you not tired of paying for the gas, wear and tear etc?. They could start with changing that, but someone else here already said its not a big deal. In the scheme of things its not, but it can affect a mindset that leads to positive change. No one especially in that position should be so entitled.

It is a big deal. Because it's a huge problem. When they run the car down using it to go to the movies and to church and to go to the food store, who pays when the car is run down before it's time? Who pays for the gas? Now multiply that by, I don't know, wild guess 1000 people every month. Did this young man have a history of working or was he just using the government job as his personal tab.

My condolences to the family of this young man. On another note, a key fact that was mentioned in this story shows why VAT will not be enough to save this country. You have civil servants using government vehicles for personal business, sometimes even on the weekends. This culture of abuse and entitlement among some Bahamians will never go away. Hence, VAT is needed to keep up with the huge tab that the government sector shoves up our butthole to pay every month to support their slackness. This madness needs to stop!

Not trying to be insensitive to the situation, but the sad thing about this picture is that if it were an ordinary Bahamian who had been shot, you never would have gotten these speedy results. Just because this person is close to the PM, the command has been given to pull out all the stops! All of a sudden the powers that be are saying, " Let's do random road blocks, let's have a meeting-Quick round up some suspects cause its one of our own!" Just another fine example of how this government puts ALL Bahamians first.

The concern here should be the profiles of the alleged killers....one 18 and all under 24 years of age. Meaning we are still breeding murderers and cold blooded killers in this town. Animals who have no respect for life. And how many opportunities will an 18 Y/O have to kill again before he is put away or he loses his own life? And shame on those who try spite a man or justify his murder because he was ambitious...shAMe!

It is a dangerous thing when we try to justify cold blooded m u r d e r!

The Drug Enforcement Unit did the arrests in this case? Well, that answers our questions on what this murder was about!

They probably got the guys on camera, CCTV all over the place on Market St.