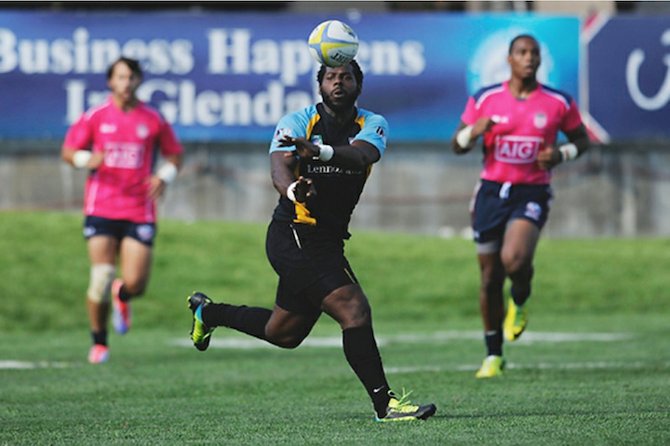 IT WAS a winless finish for the Bahamas Rugby Sevens team as they faced the top programmes in the region in international competition.

In their fourth and final game, the Bahamas fell 19-15 to the US Coast Guard in the Shield semi-finals.

They opened the tournament with a 42- 0 loss at the hands of the Mexico Serpientes national team followed by a 45-0 loss to the home team Glendale Raptors.

Game three was a 42-14 loss to the USA Hawks before the Shield playoff against the Coast Guard.

The USA Falcons eventually won the Cup final with a 36-19 score over Denver 7s All-Stars.

With the win they claimed a $10,000 purse and an automatic bid to the 2014 Bayleys Fiji Coral Coast Sevens.

The Bahamas was in Pool B alongside Mexico, the Raptors and the Republic of Texas.

Pool A included five teams from the US armed forces, including the Army, Air Force, Navy, Marines and Coast Guard.

An increasingly popular version of the sport, Rugby 7s is a quicker variation of the traditional 15-a-side game.

It will make its Olympic debut at the Rio 2016 Games.

The 2014 Serevi RugbyTown Sevens tournament was a proving ground for many potential national teams looking to break onto rugby’s big stage.

Waisale Serevi is regarded by fans and media around the rugby world as the “king of sevens.”

“The city of Glendale’s commitment to youth, club, facilities and programming at Infinity Park has created a long-term platform for American rugby,” said Serevi in a statement issued on the tournament’s website.

“Through our combined efforts to expand visibility, access and quality of rugby in the US, we have the opportunity to stage a top-flight international club tournament in a fan-friendly venue.”

At the last national 7s appearance, the Bahamas finished in eighth place at the 2013 North American and Caribbean Rugby Association (NACRA) Sevens Championships.