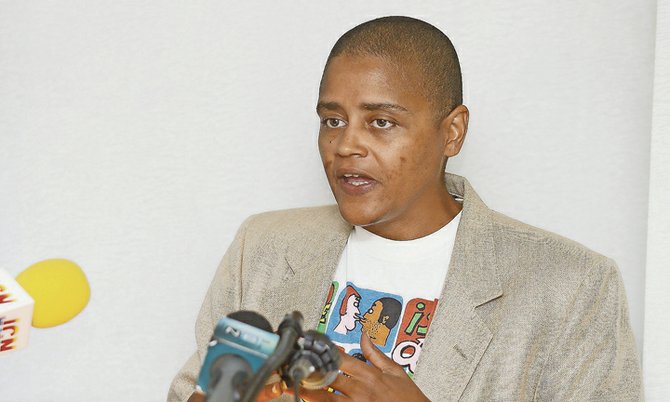 LESBIAN, Gay, Bisexual and Transgender activist Erin Greene said that the laws that prevent same-sex couples from marriage are discriminatory and added that calls for a constitutional definition of marriage as being between a man and a woman are “diametrically opposed to the principles of democracy, equality and the Rule of Law”.

In a press statement released this week, Ms Greene said in spite of Bahamians holding “varying attitudes” that “same-sex attraction and intercourse are an affront to God, nature and society,” a “greater affront” would be “the idea that a citizen or a group of citizens would ‘give up’ a right rather than ensure that all other citizens could enjoy the same right.”

Her statements came in response to Fort Charlotte MP Dr Andre Rollins’ recent call for a constitutional definition of marriage as being between a man and a woman. He has urged the government to include the definition as part of its proposed amendments to the Constitution in the upcoming referendum.

Question four of the proposed referendum will ask voters to eliminate discrimination based on sex in the Constitution, by inserting the word “sex” into Article 26. Some feel this could lead to gay marriage. However, the government has strongly denied this as a possibility and stressed that the matter is only about gender equality.

“The Marriage Act denies access to a marriage contract to same-sex couples, this is discrimination,” Ms Greene said. “The Bahamas Constitution - Chapter 3, Article 26 (4)(C) - permits the government to create discriminatory laws addressing all matters related to marriage, and specifically the provisions of the Marriage Act that discriminates against LGBT Bahamians by not permitting same-sex marriages.

“When LGBT Bahamians are denied access to a state marriage contract with a partner of the same sex they are being discriminated against.”

Recently, Dr Rollins urged the Christie administration to dissolve “apprehension” that ousting sex as a basis for discrimination in the Constitution could eventually lead to same-sex marriages.

He said concerns over the fourth constitutional amendment bill, which seeks to end discrimination based on sex, needed to be addressed to avoid “a torrent of speculation and opposition” that could derail the referendum, and suggested amending the fourth bill to give voters the option of defining marriage in the Constitution “as being between one man and one woman.”

Dr Rollins also hit out on the second constitutional bill, which would allow a Bahamian woman who marries a foreign man to secure for him the same access to Bahamian citizenship that a Bahamian man currently enjoys under the Constitution for his foreign wife.

Instead of classifying the proposed change as a matter of gender equality, Dr Rollins suggested that focus should be on whether any Bahamian – man or woman – should be able to give automatic entitlement to citizenship to a foreign spouse, and whether or not the change would result in the exploitation of Bahamian citizenship.

Ms Greene said, however, that both issues are “diametrically opposed to the principles of democracy, equality and the Rule of Law, and to the fundamental principles of citizenship.”

She added that the proposals “also stand in direct opposition to the biblical concept of free will and the message of Christ.”

“The removal and denial of human and civil rights of citizens is not the mark of a sovereign and democratic state, and it is not the standard for a country that is the home of the descendants of African slaves and Indian indentured servants,” she said. “Indeed it is the slippery slope that we should all be aware of.

“Furthermore, it seems that all of the voices that seek to dismiss this part of the discussion and view it as a distraction, a debacle or a red-herring are willing to turn a blind eye to the Universal Declaration of Human Rights and the fundamental nature of citizenship and equality.”

The referendum is set for November 6.

The debauchery, decadence and turpitude that emboldened LGBT activists will now bring to the fore, as a result of the government's failure to put forward a constitutional amendment that properly defines the institution of marriage as being limited to the sacred union of a man and a woman, is guaranteed to hasten the moral degeneration of our Christian society. The PLP are all for illegal web shop gambling and same-sex marriages ......all Christie now needs is a set of horns on his head to go with those pointed ears of his!

There's nothing "Christian" about this nation sir.

I guess the LGBT Community is becoming frustrated now that they realize their plan to have "sex" inserted in amendment No. 4 een working. The Bahamian people een falling for it. I plan to vote NO to every damned thing! They need to leave our Constitution alone!

Like Mr. Wayne Munroe said yesterday, nothing is wrong with our Constitution as women have more rights now than men and it is only a 'legacy' thing for Mr. Christie but now it's backfiring in his face. But on another note, is that the only shirt Miss Greene has, she's always weariing it! I guess she wants to make sure we see the pic of the two men kissing!

I am with you all the way. I am voting NO to leave our Constitution alone!

When is this referendum election??? Cus I plan to skip town like the PM did.....

No man, don't cause we need as many 'No' votes as possible to defeat this!

I guess the timing is off to bring these issues to the forefront. It looks like volunteering to step in front of an execution commando that has loaded weapons. Always baffles me how blunt and in your face LGBT activists are. At the end of the day many other minorities (kids living in Bahamas w/o Passports, foreign spouses etc.) will suffer from any backslash, a NO vote will have.

She is right legally.. My thing is let them suffer like the rest of us with child support, alimony, over weight spouses we don't like no more, stress, complacency, & general annoyance. Marriage is hard work & it fails 50 percent of the time. Why are we fighting to stop the m from sharing the torture they been skipping out on for so many years. Come get some of this torture gay people u been partying to long

Agreed! Let's call for a constitutional amendment to allow all currently married couples to become automatically divorced (without the financial fall-out) and not allowed to re-marry so that we can once again enjoy dating, one-night-stands and promiscuous sex.

"Wife" and "husband" are titles, nothing more, nothing less.

I'm a part of the LGBT community and I'll say this...this is the wrong time. WRONG TIME. The Bahamas is in no way shape or form ready for something like this. If I want to get married, I'll go to the States. I don't even see why straight persons want to get married here. This is hurting the referendum and influencing ignorant Bahamians to vote no on the belief that there's some hidden agenda. Erin, NOW IS NOT THE TIME.

Agree....this is only catering to people's irrational fears, and helping to swing the vote. She needs to zip it.

So when did Greene figure this out, when this has been the case from the very beginning? Opportunist is what she is. First she tried to shoot down discussions on this issue in tandem with the citizenship issues for Bahamian men and women and now she has switched her focus. Yes the laws discriminate, and the Constitution gives the government the full authority to do just that - make many laws including marriage laws, discriminatory, if the government wants to do so. But going into this now, only further muddies the referendum matter and she knows it.

Erinous Greene is the spawn of satan.......I read her page the other day on fb...she said "God isnt a Bahamian so keep Him out of bahamian affairs"......its a minority of people who is trying to hold this country hostage.....I voting no straight cross the board.....woman have way more rights than men in this country.....

I always wonder why those of the same sex always same to role play. One takes on looking like a man(Ms Greene)and the other takes on the role of looking like a women. Deep down in their sub-conscience even those in the LGBT community must admit that there is something wrong with John with John or Mary with Mary.If that not so then why the need to role play.

Who cares... when u go to sleep at night do u worry about gay this or gay that or some robber, murderer, rapist, breaking into your home and killing you. People are hostages to crime in this country, the probability of being robbed or killed is high, Ms. Green or some gay person getting married should be the last thing on our mind.

John, come on man, driving on the wrong side of the road is illegal. Consenting adult marrying or sleeping together is not your or my business. I'm not gay but I don't force my religion or personal faith on others. Until I can walk around with some feeling of safety in this lawless land we call home the last thing i'm worried about is gay people getting married. Lastly its the ones who are straight or religious that are breaking all the laws of God & Man & destroying this country. Hypocrisy. Have u ever seen a car full of gay or trans gender individual riding around Nassau Robbing or killing people. Even when i'm in the U.S the gay communities are affluent, peaceful, beautiful & in the high crime areas a church is on every block.

Let's not forget that only a few years ago women and black people had very few rights -- if any. Activists are the only means by which people can gain their human rights and equality. Will all their work be in vain? Discrimination is wrong. Period. And the hypocrisy of the so-called Christian crowd is appalling. Hiding behind a work of fiction (the Bible is not fact, people!) in order to justify your bigotry and intolerance is downright un-Christian.

Everyone is entitled to be equal and to have the same basic human rights that all people should have.

WELL WORTH REPEATING: The reproductive organs of a man and a woman were created or have evolved the way that they are for good functional and purposeful reasons; hence their well designed meaningful fit to one another is about as natural a thing as one will ever find anywhere in nature. The misuse of these organs is about as unnatural a misfit as one can possibly conjure up and by every standard of decency runs counter to or afoul of nature's own natural order of things. As for our body's waste disposal system, it is fully intended by design to be just that, and nothing more! Church leaders and decent God fearing Bahamians must implore Government to take an unequivocal stance in having marriage clearly defined in our constitution as a sacred union of a man and a woman to the exclusion of all other combinations of a union whether it be man and man, woman and woman, man and animal or woman and animal. The proposed legislation and related referendum questions as currently worded leave the door wide open to same-sex marriages and therefore should not be supported under any circumstance. VOTE NO YOURSELF AND TELL MANY OTHERS WHY THEY TOO MUST VOTE NO IN THE UPCOMING REFERENDUM!