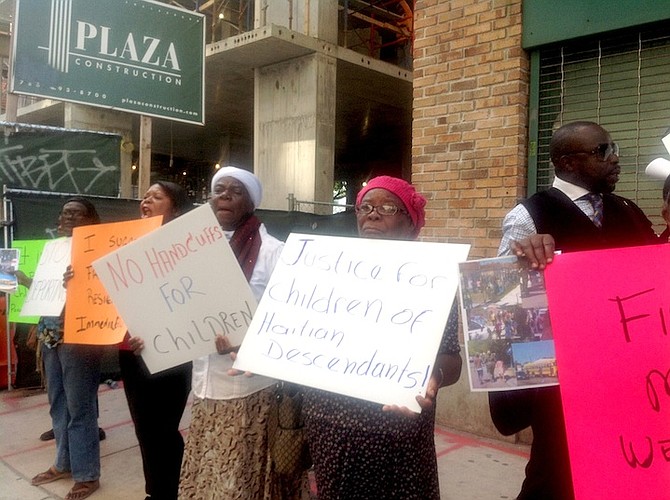 CORRECTION: The number of people involved in the staged protests against the Bahamas immigration policy in Miami on Friday was 12 to 15 as allowed by the City of Miami Police Department’s demonstration permit and not due to a low turnout as reported on Saturday in the Big T.

Mr Mitchell said he did not expect any fallout from the picketing outside of the Bahamas Consulate General’s office building on Friday.

He gave brief remarks on the matter during a press conference at the Department of Immigration on Hawkins Hill yesterday.

Mrs Campbell, with about 15 protesters of Haitian descent, chanted, “Stop deportations” and “Boycott Bahamas” during the demonstration on Friday.

They further called for Mr Mitchell’s resignation as immigration minister.

Mrs Campbell told The Tribune that groups of a similar size were stationed at the Port of Miami and the Miami International Airport for simultaneous protests.

“I think it (the protest’s small crowds) speaks to itself,” Mr Mitchell said. “The position I have always taken is that the Bahamian press makes more of what she does than is really warranted.

“I think at the end of the day what happened in Miami really shows that it really doesn’t amount to anything and that most people know that the Bahamas is not involved in any way shape or form in any kind of state sanctioned abuse.

“It is important again for distinctions to be made on this. What the critics of this have been trying to do is to lock individual acts of possible maleficence with a state sanctioned regime of maleficence or abuse and the things are two separate matters.”

Mrs Campbell said that despite the low turn out, she was not discouraged. She said the protests would continue as often as possible until the policy is revamped.

“What we’re doing is spreading awareness about what is going on.”

Bahamas Consul General Ricardo Treco at the time called the protests a “dead issue”, adding that Mrs Campbell did not have much political clout in the city.

Mr Treco maintained that his office would not meet with Mrs Campbell until she retracted “defamatory and false” statements against the Bahamas.

He suggested that her outspoken position on the country’s new immigration policy was politically motivated.

The Ministry of Foreign Affairs on Thursday issued an advisory for Bahamians travelling to Miami concerning the demonstrations.

The statement referred to Mrs Campbell as an anti-Bahamian Florida legislator, and described the demonstrations as “ill-conceived and misdirected”.

I got a good belly laugh from this "protest". Thanks Ms. Campbell. I needed that. LOL!!!

We need to stop paying attention to this crazy woman, the attention from us is what she is feeding on!

On another note, I want to extend holiday greetings and all the best in 2015 to the regular posters on the Tribune242: TalRussell (you keep me laughing whenever I read your posts), Well_mudda_take_sic, ThisIsOurs, BirdieStrachan, Cobalt, SP, The Oracle, duppyVat, John, Grassroot and concernedcitizen. To All, have a safe and enjoyable Christmas and remember to worship at the Church of your choice!

Even the 12 disciples while they made there way about and around passing the word on - were known to have to arm themselves with a weapon at the ready to be used against thieves and murderers. Even Jesus was nailed to his cross between a murderer and a thief. Comrade you show kindness to we not always so deserving. I am like Comrade Jesus who told a lot of stories illustrating why we must remember the poor and needy among us. Jesus was no fan of big business, Now, I will have to wait 2000 years, after my final Tribune blog post, to see if even Comrade Tal will be remembered in a better light than I am often portrayed. Comrade may the peace, spirit and joy of this "Holy" Christmas season be with you and those you love ... and stay in touch with you throughout 2015.

Have a safe and Merry Christmas!:)

Merry Christmas to you and yours!

I am sure the news media in the Bahamas, Fred Smith, Joe Darville and Georges, must be most disappointed , The Bahamian news Media choose to build Ms, Campbell as this great US Government Offical But she does not come with clean hands. But it is never mentioned.

Within Playground rubberized mats we now have a huge assortment of mats associated with different dimensions, colours, designs and grabs. You may choose the following rubberized mats for the play ground for example Rubber Lawn Playground Pads, http://www.playgroundmatsuk.com/playg...">Playground Rubber Mats