THE LOVE she has for Bahamian culture and the home-grown rake n’ scrape and Junkanoo beats adds the spice she needs to keep pushing her music skills and talent.

A singer, entertainer and aspiring songwriter, Georgina Ward-Rigby got her musical foundation from singing in the church choir. She also sang in school choirs growing up as a child. 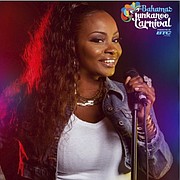 Whether she is working as a soloist at weddings, funerals or other special events and entertainment productions, Georgina enjoys her craft.

She is a member of the Panache jazz band, the director of her very own cultural show, and currently employed at The UpScale Restaurant and Lounge as the entertainment manager.

The Freeport native and mother of three was just recently chosen as a semi-finalist for the Bahamas Junkanoo Carnival 2015 CD compilation.

Georgina said the whole competition experience has been wonderful so far.

In April 2014, the Bahamas National Festival Commission (BNFC) set out on a mission to inspire Bahamian musicians from across the Bahamas to write new music and produce original songs for the first Bahamas Carnival.

History was made as over 170 original songs were submitted.

Twenty-five semifinalists were chosen to have their music professionally recorded and produced for the Bahamas Carnival Compilation CD.

Georgina’s song is called “In The Carnival”.

She said her inspiration for the song came from the theme of the contest, “Jump In Da Line”.

As far as her motivation goes for entering the competition, Georgina said a friend of hers, producer Patrick Boston, was her inspiration.

“He is a true believer of my talent and he thought we should give the song contest a shot.

“He believes in my talent more than I do at times, always pushing me and advising me to be greater.

“The grand prize for the contest also gave me a great push as well,” said Georgina.

On May 8, 2015 the top 10 artists will perform on the Music Masters stage where they will share the spotlight with a Grammy Award winning artist.

This concert will ultimately determine who is crowned “Master of the Bahamian Sound”.

“Music is my passion and my first love.

“Therefore I see myself involved with music until the day I die.

“At the moment I am not writing any songs, but I often sing with the band and perform in a weekly cultural show.

“I do not have any mastered singles available or song covers on the internet, but that will be my next step,” said Georgina.

For next year she hopes to collaborate with other as yet unknown artists like herself and create entertainment magic.

Georgina also has plans to uploaded Youtube videos to hopefully be discovered internationally.

Apart from conventional rhinestones and sequins decorating in the dress, the color of your choice should be an important thing. http://www.popprom.com/Prom-Dresses/B...">Black Prom Dresses will be attractive and noticeable. Black is a color that can make people thinking of something romantic. With the scent of Lavender perfume, you might bring people around you to Provence. All of you will be absorbed in the strong French lavender fascination. The colorful lamplight and cocktail will compete successfully with your dress which will add more specific temperament and charm.

i like when people use their talents to make their culture popular. Georgina Ward-Rigby is a good example for Bahamian culture, and she is involved in so many projects. http://rentsmart.ro">Bravo!