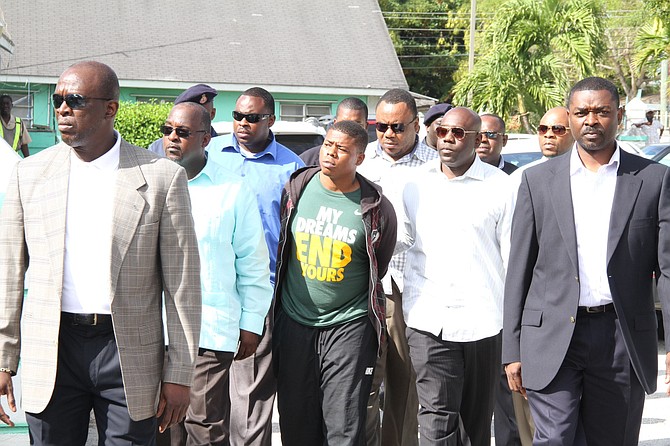 A SMALL crowd of relatives and friends of murdered police Sergeant Wayne Rolle gathered outside the Nassau Street Court complex this morning to see the man accused of killing the officer on December 4.

Flanked by several high-ranking police officers, 25-year-old Dion Bethel - who was shackled and chained - was ushered into Court No1.

He was arraigned before Magistrate Samuel McKinney on two criminal offences.

In the first count it is alleged that Mr Bethel, of Quakoo Street, unlawfully harmed Sgt Rolle causing his intentional death. He was charged in the second count of armed robbery, in which it is alleged that he stole Sgt Rolle's $700 Samsung smartphone.

Mr Bethel was not represented by an attorney and he was not required to enter a plea.

Magistrate McKinney told the accused that the Magistrate's Court did not have the jurisdiction to grant bail or consider it because the charge was an indictable offence. Therefore, Mr Bethel was remanded to the Bahamas Department of Correctional Services until he is tried in the Supreme Court or granted bail.

The matter was adjourned until February 26, 2015 where a voluntary bill of indictment will be read to fast track the matter to the Supreme Court.

Kendira Farrington, 19, was also arraigned before the court for receiving.

It is alleged that between December 4 and December 20, Ms Farrington dishonestly received a cell phone, the property of Sgt Rolle, knowing that is was obtained through a criminal offence.

When asked how she would plead, Ms Farrington initially answered that she was guilty of the offence. However, her attorney, Terrell Butler, interjected, saying that her first plea was equivocal.

The magistrate re-read the charges and Ms Farrington then pleaded not guilty. She will be remanded until December 30, when the prosecution is expected to make a determination on whether she will be further remanded until February 2015.

She has opted to be tried before the Magistrate's Court.

this looks ridiculous......y someone please tell me why we need all of these officers to escort a man to court who is already handcuffed and shackled.with all this crime going on they can't find anything to do.

What looks ridiculous to you may not be the same to others. If one of your close family members are simply rushed to the hospital for a medical emergency; you not being a doctor, nurse or hospital staff whatsoever, wouldn't you be present at the hospital. Or would you have stayed at home knowing that the house needs to clean also. Now in this case for most of these men, they have lost one of their Work Family Members, A Soldier, A Team Player a Lodge Brother in death by a criminal act. Shouldn't they have the rite to see justice served out. Besides that, those men came out of their air conditioned offices out of a comfortable leather chair, so technically they are finding something to do.

R. I. P. "Brother" Rolle, those fine men will take it from there.

Don't be ridiculous. The officers are there for the defendant's protection. I'm sure you've seen the scenes outside court when these men are taken to be arraigned. Imagine what will happen if two officers escort him and and a mob attacks and harm him, then what you will say is that the police didn't provide adequate protection.....think first, then comment!

The man shirt reads "my dreams end yours" any questions?

This animal will be out on bail and back menacing society in no time.

I should been taking him in, that jacket would been zipped. They should have them not wear these printed shirts to court. watch, this is gonna come into effect. who said just cuz he's cuffed n shackled they shouldn't escort him? Their comrade is the victim. Come on. Is like it could have been me, they are saying.

Christie and Nottage need to get off their high horses, pull their heads out of their backsides, accept they don't know what they are doing, and ask Trinidad Tabago what to do!