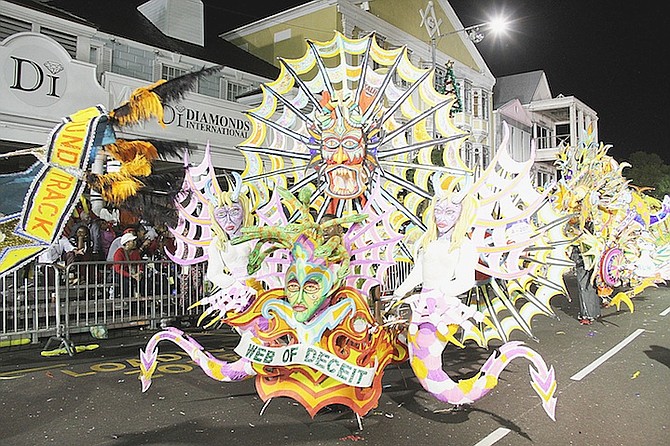 DELAYS marred the Boxing Day Junkanoo experience for many spectators, prompting officials to pledge to seek ways of improving the pace of the parade in future.

While the parade began on time around midnight Friday, a near one hour delay by the Music Makers group disrupted proceedings.

The group was expected to be the second on Bay Street, but was replaced by One Family, who took the second category A spot, but did not start performing until their original time slot around 3.30am.

Some Music Makers participants claimed that police did not allow their members through the starting gate, causing them not to get their lead pieces to the gate on time. Others said the group’s truck suffered a major delay on its way to Bay Street.

The group was eventually disqualified for not having enough lead pieces.

In addition, the Valley Boys struggled to move one of its taller costumes out of the road after parts became tangled in a rope tied to electrical wires on Shirley Street.

It took participants about two hours to move it, according to Junkanoo Parade Management Chairman Douglas Hanna.

Meanwhile, spectators on Shirley Street waited hours before the first major group appeared, with the Valley Boys arriving around 3am.

The second major group, One Family, arrived in the area around 7.30am.

One Family Chairman Darron Turnquest said that delays are sometimes the consequence of a parade that is difficult to produce.

“The delay with results - and sometimes even the delay with the parade - becomes frustrating not only for those persons watching, but also from Junkanoo (participants),” he said.

“I heard the cry that other parades move very quickly. I don’t think Junkanoo can be compared to the Macy’s (Thanksgiving Day) parade, though. This takes a while, for those who understand Junkanoo, who understand costume set up and breakdown and who understands how groups get to Bay Street. “There were glitches in people getting to Bay Street and some groups clogging up the holding space where groups are really supposed to come through and get on to Bay Street. Some groups’ costumes malfunctioned.”

This is why Junkanoo is a waste of ones time. You go to see the parade but what you get is one group at 12 then you wait for hours for the next group. I heard that at 12 the next day there where still groups that had to do their 2nd. lap. Who in the hell wants to sit around for 12-14 hours for Junkanoo?

Totally agree ... it's a complete cluster-f*ck, all it spotlights anymore is Bahamians' worst faults. I quit going years ago.

Junkanoo used to be non stop music, with each groups beat competing with the group before and after. Now one falls asleep watching lethargic costumed group members shuffling past with nothing but yelling marshals to listen to with mere minutes of music between. Get Junkanoo back to what it once was by Limiting group size and requiring a 70% music component! Then it would be worth a few million to sponsor. Another sad indictment of our organizational skills.

Bravo, well said. If only anyone would listen ... but they won't.

This is an absolute nonsense. It is time to completely re-think the structure of Junkanoo. It is not working for the participants nor the spectators. It is obvious that the major Groups have become too large. Why not just limit the number of participants in any group? What's so difficult about that?

Ouch Comrade Honestman you hit nail dead on he head. Can you believe that for a group be recognized for the top prizes, they must have a MINIMUM of 200 members in their group parading. Even worse - there are no limits to a groups numbers. That it now takes a minimum of 10 hours for a group complete its required parade route.

Can you believe JNCP actually outsourced the judging of the groups?

Solving this century old issue is actually quite simple:

1) Any group showing up late forfeits their spot and is simply cancelled....PERIOD.

3) Change the route to one way moving West to East on Bay St., culminating in the direction of Potters Cay where groups, fans and tourist can mingle, party and spend, spend, spend!

This obvious simple solution will resolve the existing insanity. However, I wouldn't hold my breath and certainly don't expect them to change anything this century.

Things will change vola, eddie and the likes are to old to have say so, or the government trust and give younger minds a go at it.

Logistics and simple economics doesn't warrant Junkanoo being held at its current location and in its present form. From early in the evening of Christmas Day most of the island, especially East and South were in a gridlock of traffic as persons tried to get to the parade or to the carnival or to wherever they went that evening. One wrong move threw you off schedule big time. Now imagine the delimma of junkanoo groups trying to move hundreds of costumes under the same traffic conditions. Many had to depend on the same vehicle to move a number of costumes, some of which never made it to Bay Street. Then imagine a group of several hundred people being suspended from a parade for being a few hours late. After spending at least half a year preparing spending hundreds of thousands of dollars and employing thousands of man hours for which most is not compensated. And even for those who made the paradw and may have placed first or second is it wort the few short hours of glory? My suggestion is

My suggestion is only free dancers and band allowed. Scrap groups have a single band per 200 persons, each can have their own banner. Costume can't be more than 2x9

Yeah,God love the scrap groups,but honestly they look bad and their music is awful. But they do love Junkanoo and can sometimes be entertaining. Put them all together in one continuous procession, they're all accompanied by a single paid musical Junkanoo band, they're on at the halfway mark, and that's that. No more scraggly groups for the rest of the parade.

And move the location

I heard the cry that other parades move very quickly. I don’t think Junkanoo can be compared to the Macy’s (Thanksgiving Day) parade, though. This takes a while, for those who understand Junkanoo, who understand costume set up and breakdown and who understands how groups get to Bay Street. “There were glitches in people getting to Bay Street and some groups clogging up the holding space where groups are really supposed to come through and get on to Bay Street. Some groups’ costumes malfunctioned.

This happens EVERY year. Stop building these costumes that are so challenging to get to .Bay. There were many beautiful free dance costumes that were quite enough to show theme creativity beauty and movement. Leave the dinosaurs in the past. They're too big and heavy for the road to the future.

after waiting for 4 hours once for the junkanoo to start seeing one small group after an other few hours no groups i left and i never have been back .

Haven't been to Junkanoo since I got caught in the middle of a pushing-shoving mob on the corner of Frederick & Bay Streets sometime in the 1980s and felt my breath leaving my body, then we all fell into Bay Street. Limit the size of the groups and give every group the same theme to display their creativity and talent. Less fabric, feathers and horns but more drums. Growing up in the 1960s/70s I remember hearing the beat of the goatskin drum loud & clear; nowadays horns drown out the drums. Fix it!

AMEN....Your point about drums is totally right. Somehow somebody got the idea that horns were more important than drums which is a colossal mistake.

Junkanoo is about drumming more than anything else and they are about to destroy the art form with way to much focus on horns.

What makes Junkanoo extraordinarily unique are drums not horns. Tourist and locals alike get the real thrill of Junkanoo from drums.

Why would tourist travel to Bahamas or locals leave their homes to hear people blowing horns which they can get at any funeral, high school football game?

Junkanoo is being ruined by horns and the ongoing chaos!

Glad someone agrees with me, now if only the smart people in charge would agree too! I also wonder if 'they' didn't decide to push the horns because actual goatskins were becoming harder to find while horns could be brought from a store. Who knows...

Do all of you watching from home on tv have surround sound with woofers connected to your tv, pc, or mobile device to pick up the low frequency sound of a drum?

Secondly for those who actually go out to junkanoo and feel the drums aren't as loud. It may have something to do with the fact that lit sternos are not allowed inside the drums anymore so they don't stay heated the entire lap as before.

So much for progress and improvements...