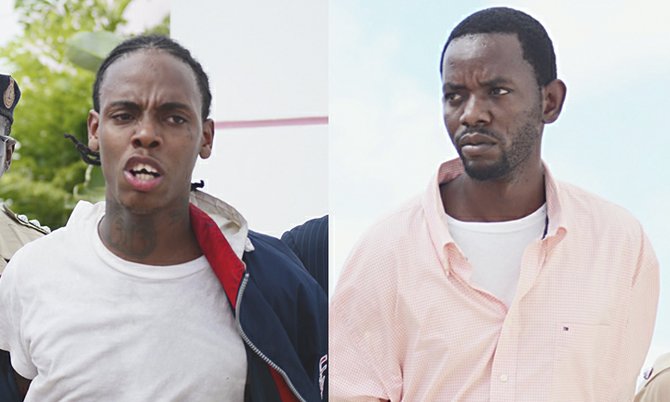 POLICE escorted two men to Magistrates Court yesterday to be arraigned on separate charges in connection with two of the 10 murders that occurred last month.

It is claimed the West Street resident committed the crime on January 2, the victim being Dion Burrows.

Burrows, on the evening in question, was sitting with another man in front of an apartment complex on Buttonwood Avenue, Pinewood Gardens, when the occupants of a vehicle fired several shots at them before speeding off.

Burrows received multiple gunshot wounds and was pronounced dead at the scene.

The other man was taken to hospital where he was treated for a gunshot wound in the leg.

Severe was not required to enter a plea to the charge due to its nature and was told that his case would be fast-tracked to Supreme Court for trial.

The presentation of a Voluntary Bill of Indictment, scheduled for April 15, will facilitate the transfer of the case from the lower court.

In the next arraignment, 30-year old Jermaine Missick of Blue Bonnet Drive was accused of the January 6 murder of Marcus Miller, who was shot in the neck on Carmichael Road and died seven days later in the Princess Margaret Hospital.

Missick was also not required to enter a plea to the charge and is also scheduled to be served with a Voluntary Bill of Indictment on April 15 in his next Magistrates Court appearance.

The question of bail did not arise for either men as the lower court no longer has the jurisdiction to consider bail in capital cases.

A week ago, Murphy Town resident Pedro Dean was remanded to prison without bail after being charged in connection with the recent killings (January 18) of Landris Curry and Drayson Forbes, both of Dundas Town, Abaco.