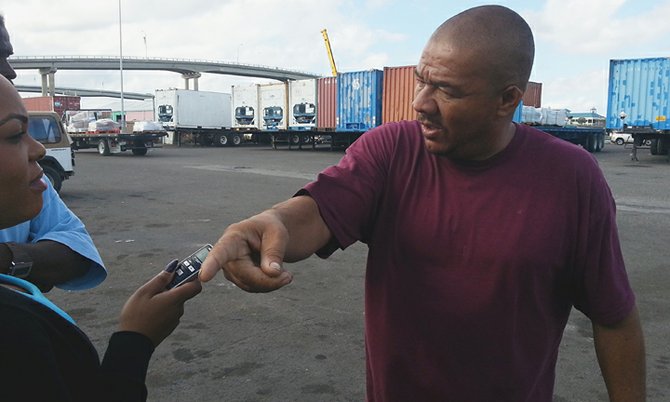 Fisherman Jude Evans, said the Bahamian fishermen must be armed to protect themselves on the high seas.

LOCAL fishermen were outraged yesterday when Agriculture and Fisheries Minister V Alfred Gray said he would not support arming them with guns as protection on the high seas against Dominican poachers.

Pointing to a recent exchange of gunfire between Royal Bahamas Defence Force officers and men onboard a Dominican vessel, the fishermen, now docked at Potter’s Cay, said there is no way to protect themselves, other than with licensed firearms.

Luther Higgs, on board the “Carol Pan”, says he believes that all fishermen should have the right to protect themselves with a weapon of choice. Mr Higgs said he feels robbed and cheated of what is rightfully his.

“They ain’t supposed to be in Bahamian waters,” Mr Higgs said. “What they getting in the Bahamas is illegal (and) what they getting belongs to Bahamians. They are killing Bahamians’ fishing industry. In another year all Bahamians will be finished fishing all together.

“I tell you one thing, only the good Lord could estimate how much fish they have taken out of Bahamian waters. Man can’t estimate that.

“They need to get off their (expletive) and get more boats to patrol our waters.”

Another fisherman, Jude Evans, owner of the vessel, “Patches”, said there is no way to compete with foreign fishermen because there is a sincere fear that they will “slit the throats of Bahamian fishermen.”

Mr Evans said the increased frequency of poachers at sea has proved that politicians are not taking their plight seriously.

“These parliamentarians,” he said, “they don’t care about nobody. It’s a crying shame because they are killing us fishermen.

“When you on the high seas, you better be armed because they have their weapons and don’t hesitate to use them.  Just about every trip I go on (I encounter Dominicans) and I travel the whole Bahama Bank. Every fisherman at sea should have a gun until the government gets serious about patrolling our waters.

“In the night when we sleeping we have to keep watch. I got to keep my eye out for them if they come on my boat and take my fuel and get in my freezer. I dare not go up against them, they will cut my throat.”

Speaking to The Tribune yesterday as he toured the latest Dominican vessel confiscated and being held at the Coral Harbour Defence Force base, Mr Gray insisted that he could not stand behind the idea of firearms on Bahamian fishing boats.

He warned Bahamians at sea not to confront Dominicans, but instead to notify the relevant authorities.

“Wherever there is a gun,” the Minister said, “and wherever there is another gun, chances are there will be a shootout. And when that becomes possible, lives could be lost innocently because you know if I have a gun and you have a gun it’s really about who can shoot the best. I am not going to encourage that, but that’s not a decision that I should make.

“I am asking Bahamian fishermen not to engage these vessels because once they come in Bahamian waters they are armed and dangerous. One life lost is one too many for me.”

But you can be rest assured Gray supports Nottage and other parliamentarians like him packing a pistol! Gray is basically saying you stupid fishermen better get smart and learn where to cast your net (next vote).

This is assinine, any law abiding citizen should have the right to own a handgun or any legal arms for there protection. The reality is the bad guys have guns and will use it, if u look at the highjacking at sea on the Somalian Coastline many would have been stopped if the ships had guns. Criminals like soft targets, not having a gun in your home or access to it makes u a soft target, your first line of defense is the man in the mirror, then your neigbors, then the government.. Try it the other way and your a sitting duck.. A gun is a tool in the hands of a honest man, I have them, i time to time carry a 40. it sits in a pancake holster concealed, i never had to use it, hopfully never will, but i have a choice if attacked or any of my family, friends or neigbors are attacked. Cut the b.s. if these guys are legal, law abiding citizen let them have there guns, its like GRAY would rather them be sitting ducks on a unsecured ocean of criminals.

Even worse the response time for assistance could be hours on the open sea. You would be dead by the time assistance arrive..