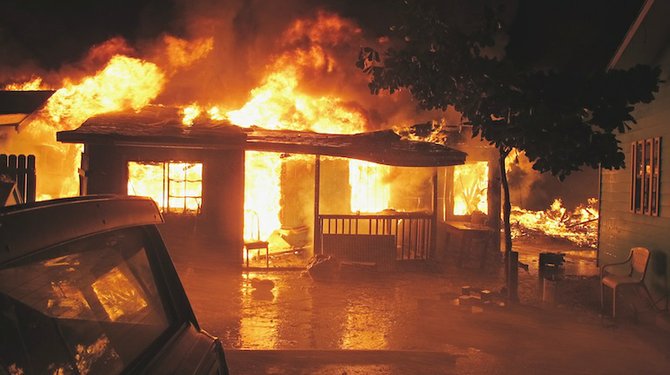 POLICE in Abaco are investigating a fire that claimed the lives of a mother and her year-old son.

It happened around 9:30pm in the Pigeon Pea area in Marsh Harbour, Abaco.

The Tribune understands more than 80 homes burned to the ground leaving more than 500 members of the Haitian community homeless.

According to sources in Abaco, because of the proximity of the homes in Pigeon Pea, firefighters had to fight the fire from the outside. It took them nearly six hours to completely extinguish the blaze

“It was total chaos. The fire fighters were trying to put the fire out, but it was hard for them because the residents were running in and out trying to get their furniture and clothing. There were also cars blocking a lot of the structures. It was a tough time for them. It is total devastation over here. Even the homes that did not get totally destroyed have water damage or damage to the roof. A lot of these people are illegal so they aren’t even going to get the help from the government because they do not want to get deported. This is total disaster,” said the witness who did not want to be named.

While surveying the damage, officers discovered the charred remains of the mother and son believed to be Darlene Jacob and Dornel Jacobs Jr. Relatives say the mother was preparing for a New Year’s eve church service when she realized her home was on fire. Darlene went into a back room in the home to get her son, but never returned.

Deputy Prime Minister Philip “Brave” Davis as well as Minister of Social Services Melanie Griffin, the National Emergency Management Agency and the Red Cross, flew into Abaco early yesterday morning to speak with the residents and assess the damage.

Mr Davis told the residents that the government will do all they can to ensure a situation like this does not happen again, but he asked the members of the community to make certain that their homes are up to standard.

“We have just appointed a new engineer and he has taken up residence and a part of his job is to visit areas like these and ensure buildings are up to code and no new buildings are being erected,” he said.

“If homes like these continue to be built, without the proper tools means that disasters like these will happen again. They need to adhere to the rules of building and environmental concerns, they must help themselves in order for us to help them. We empathise with them, but they cannot keep living like this. It is just not safe.”

“We are making efforts right now to get food and assistance for these persons,” she said. ”We have also set up a place were assistance will be done and we hope the victims will come and be properly assessed so we can truly say what their needs are and we can help them. After we see what they need, we will go from there.”

Temporary assistance will be made available for the displaced residents at Camp David.

The MP for the area, Edison Key, could not be reached for comment before press time last night.

Fire officials say the cause of the blaze is still unknown and investigations continue.

So very sad for everyone who is homeless and for the lost lives. May this year bring you new blessed beginnings.

I am sure that the Government of Haiti will send monetary assistance, just like we did after the earthquake down there.