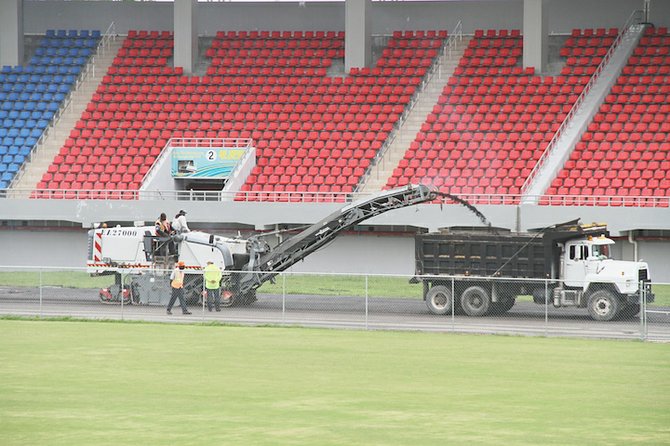 IN preparation for the hosting of the inaugural IAAF World Relays in May, the National Sports Authority (NSA) has engaged the services of Mondo out of Italy to reconstruct the proper sized track at the new Thomas A Robinson Track and Field Stadium.

Work on the new stadium, which was built by the People’s Republic of China as a gift to the Bahamian people, has already begun.

Jeff Beckles, manager of the NSA, said two weeks ago the workmen started ripping up the synthetic surface that was in place and, this week, they started the grinding of the asphalt yesterday.

“Even though it’s raining today, they are continuing to make progress on that,” he said. “Hopefully before the end of this week, they would have made significant progress on completing that. So it will probably take about 10 days to do the grinding process, but it’s progressing well.”

It’s projected that Mondo, which already has an engineer on site working with a number of local companies, will have the new surface completed by the end of April, just in time to have a test run on May 10-11 with the one lane-one island concept that will be introduced, along with the trials for the Bahamas team before the IAAF World Relays May 24-25.

“We’re very pleased with the progress so far and we should be kicking off the next phase of the work in the next 10 days, weather permitting,” Beckles said. “We’re very hopeful that it will happen and we’re keeping our fingers crossed because there’s still a lot of work to do.”

Over the next three months, Beckles said it’s anticipated that Mondo and the local companies will employ at least 100-200 people to work on various aspects of the project that is estimated to cost around $12 million, including an upgrade to the original Thomas A Robinson Track and Field Stadium.

In addition to resurfacing the track, Beckles said another component will be to construct a tribunal for the media as they prepare for more than 100 local and international journalists who will be covering the World Relays.

As for the old TAR stadium, Beckles said they will be completing the 130-metre stretch of the warm-up facilities and improve the surroundings around both stadiums.

“Once we are completed, we will be able to host any local, regional or international competition at that facility,” he said. “So you will have a much improved facility where the local athletes will be the real benefactors. We will level the infield and we will improve the grand stand and outside of lane eight, we will upgrade that to provide more space for the warm-up area.

“We will make the athletes’ pathway more safe and we renovate the restrooms and the other facilities there as well as putting in a proper sound system. So at the end of the day, even the average high school athlete will get a chance to train in a much improved facility. With the two stadiums that we will have, we will be able to host level one competition, not just for track and field, but any other activity that we host there.”

As the road progresses at both facilities, Beckles said athletes will be affected in their training and the use of the TAR and the NSA has communicated that to the partners, including the Bahamas Association of Athletic Associations and the various schools and other agencies that usually occupy the old stadium.

“They have a vested interest in, but they understand that in order for us to complete these facilities to the level that we need to, there will be some interruption in their activities,” he said. “We will try to keep it to a minimum, but we have assured them that in order to have an upgrade, some people will be inconvenienced.”

Making a comparison to renovating your home, Beckles said at some stage, you will be inconvenienced, but when it’s done, you appreciate the new look and that is what they are hoping for when the upgrades to both stadiums are completed in April.