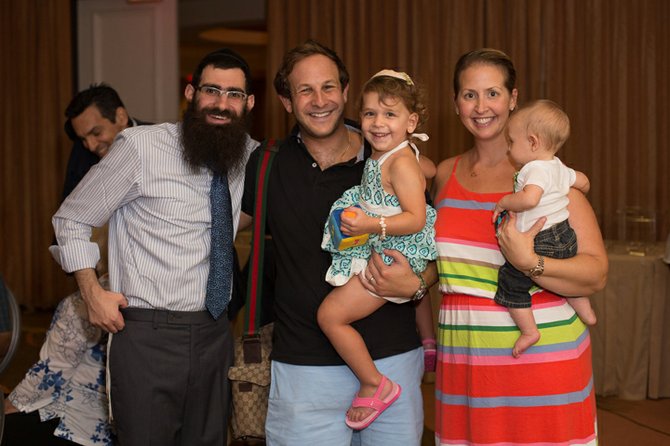 Members of the Bahamas’ local Jewish community recently celebrated Chanukah with a festive outing at the Sheraton Beach Resort on Cable Beach.

Chanukah, which commemorates a successful revolt by the Jewish Maccabees in 165 BC, is also known as the “Festival of Lights”.

It is an eight-day Jewish holiday that commemorates the re-dedication of the Holy Temple in Jerusalem at the time of the Maccabean Revolt.

Rabbi Sholom Bluming, from Chabad of the Bahamas, said that the holiday is observed by lighting a nine-branched Menorah – one candle lit each night.

“The holiday of Chanukah is a festival of a historic victory and celebration for all times, highlighted by the kindling of Menorahs each night of the holiday,” said Rabbi Bluming. “Yet it also contains a universal message for people of all faiths — that ultimately, good will triumph over evil, freedom over oppression, and light over darkness.”

“Everybody has a special light, and you have to share that light with the whole world,” Rabbi Bluming added.

The Menorah, which is used in the celebration, is a symbol of spirit over matter and light over darkness. It is a beacon against religious bigotry and persecution, and an inspiration for those that cherish freedom.

Chanukah recalls the victory more than 2,100 years ago of a militarily weak but spiritually strong Jewish people who defeated an enemy that had overrun ancient Israel and sought to impose restrictions on the Jewish way of life, prohibit religious freedom and force the Jewish people to accept a foreign religion.

During the occupation of Jerusalem and the Temple, the Syrian Greeks desecrated and defiled the oils prepared for the lighting of the Menorah, which was part of the daily service in the Temple. Upon recapturing the Temple from the Syrian Greeks, the Jewish people found only one jar of undefiled oil, enough to burn only one day, but it miraculously lasted for eight days until new, pure olive oil was produced.

In commemoration of this event, the Jewish people celebrate Chanukah for eight days by lighting an eight-branched candelabra known as a Menorah. The Menorah is placed in highly-visible place to publicise the miracle, with its message of hope and religious freedom to all. Today, people of all faiths consider the Chanukah holiday as a symbol of the triumph of freedom over oppression, of spirit over matter, of light over darkness.