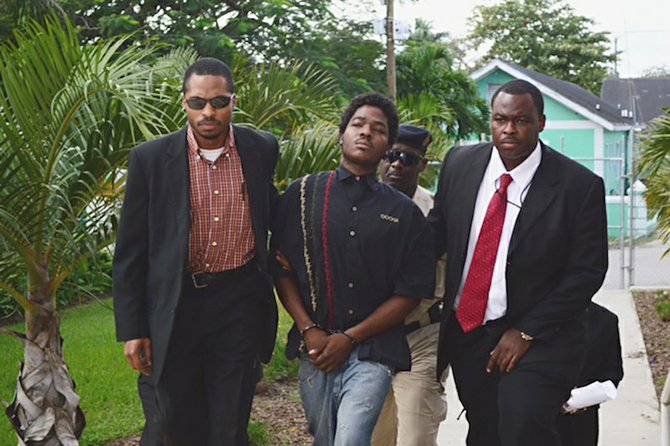 A MAN was yesterday charged with being responsible for an August 10, 2013 fatal shooting in the Kemp Road area.

Brown was not required to enter a plea to the charge of murder.

On the day in question, around 10.30pm, police were notified of a shooting that occurred at Whites Addition off Kemp Road.

Rolle’s case will be fast-tracked to Supreme Court for trial through service of a Voluntary Bill of Indictment.

The accused was remanded to Her Majesty’s Prison, Fox Hill because the question of bail did not arise.

In November 2011, the jurisdiction to consider bail on capital offences such as murder was withdrawn for the Magistrates Court.

The accused was not represented by an attorney at yesterday’s arraignment.

The officer in the back need to observe how to handle an 'accused'. If that was him and the older officer, the accused always seems to be ruffed up. Look and learn how to professionally carry out your duties.

Looks like a upstanding young man with both a caring Mother and father that taught him right and wrong.