'Does The Baaa Really Care About Distance Runners?' 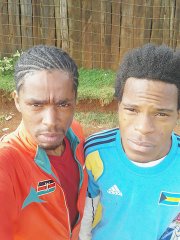 In an effort to bring some international awareness for the Bahamas in distance running, Oneil Williams decided to return to Kenya to continue his training. He and his younger brother, Ramon, left town on September 27, 2013 and after a journey that took more than 20 hours, they finally arrived two days later.

“Our training has been going great and we are currently working out with Mo Farah, the double Olympic and World champion in the 5,000m and 10,000 metres, also Jake and Zane, the Robertson twins who are world championship 5,000m finalist 2011/2013 respectively,” Williams said from Kenya.

“We average 70 and 80 miles a week at 7,800 feet above sea level. Every now and again, we get to see world and Olympic champions like David Rudisha, Asbel Kiproch and Linet Masai just to name a few. The struggle of training is both hard on and off the track.”

Like they did when they left, Williams and his brother are enduring a financial struggle, yet they are still determined to stick with their goal.

“The training is going well but we are struggling financially. Kenya is half way around the world and without financial assistance, it has proved quite difficult because we don’t have enough food and sometimes we run out of water but we still train and do it twice a day,” he said.

While they would like to get some financial support from the Bahamian people, Williams said they are more disappointed in the Bahamas Association of Athletic Associations, who has rejected their request to be able to represent the Bahamas at the NACAC Cross Country Championships.

“We emailed the BAAAs, asking if we could represent our country at this year’s NACAC cross country championship and we never got a response for the past month,” Williams said.

“I was fortunate to get through to vice president Iram Lewis who forwarded me to Carl Oliver, the secretary general. The email Carl sent me was very disappointing because it stated the BAAAs was rejecting the request to represent our country at the regional games.”

Williams, still peeved with the BAAA which has yet to endorse their trip or even provide any financial support towards their cause, said that because of financial constraints, the BAAA can’t afford to send them, but they are making provisions to send one athlete from New Providence and two from Grand Bahama.

“When I heard about financial restraints, I thought about days my brother and I did not eat or have water to drink, but we continue to train because we really want to represent our country,” Williams said.

“We are not on subvention and there are not many people helping us. We spent over $4,000 just to come to Kenya to train for my country because we don’t have any good distance runners. We depended on the money from my jeep I sold, Mr Dionisio D’Aguilar, Ravi Noronha, Mr Harrison Petty and Mrs Cartwright.”

Williams said all they want to do is represent the Bahamas. “It seems like we have to beg our federation and it’s a crying shame,” he said.

“Last year, the federation had over 20 athletes for the World Championships along with the same number of officials and each person’s ticket cost was $2,100. However everyone was able to make the trip to Moscow. The federation said they had no money but several teams went to represent the country so why can’t the federation field two of their best athletes to go to NACAC which costs under $1,700. The question still remains, does the BAAA really care about distance runners?”

On the contrary, BAAA president Mike Sands made it emphatically clear that they have made one small request from Williams and so far he has not heeded to their wishes.

While he applauded the Williams brothers for their decision to make it a personal trip to develop themselves, without anything substantial to look at, Sands said the BAAA cannot make any decision on his selection to the national team.

“We have no performance for him. He is away training and he has communicated to the association his willingness to participate. That’s fine, but we have nothing to measure his ability on,” he said. “The athletes who we have identified, we have information on their performances and we are still looking at a few other recommendations, but we have performances on all of those athletes from either the cross country that we had here or the marathon. But we have nothing on Oneil.”

Once he can provide some information on his performances, Sands said the BAAA will be in a much better position to make an assessment on his selection to the national team.

This is the second sting for Williams in Kenya. He first made the trek there about two years ago by himself before he returned this time with his brother.