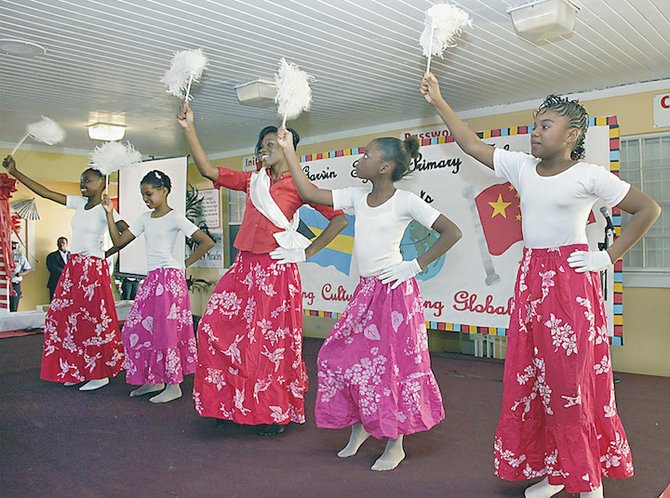 GARVIN Tynes Primary School celebrated the Chinese New Year with great fanfare – to the delight of Yuan Guisen, Ambassador of the People’s Republic of China.

Although the New Year is officially January 31, the students showcased the history and culture of China a few days early during a special assembly on Tuesday, January 28, at the Alexandria Boulevard school.

According to Carolyn Wright-Mitchell, Garvin Tynes principal, the idea for the assembly came from her experience of studying for a Masters in Educational Leadership in China in 2011-2012.

Mrs Wright-Mitchell was a recipient of a Chinese government scholarship. She decided that the assembly would be a good opportunity for teachers and students to learn about the rich history and culture of China, to which she was exposed.

Under the theme, “Connecting Cultures, Creating Global Citizens,” students from grades one to six performed skits, dances and choral speaking in Chinese and English which brought ample smiles and applause from the visitors.

The students used great creativity in showcasing what they have learned about China.

They also modelled traditional costumes of the Chinese people and showcased Chinese foods like spring rolls and sticky rice.

The students gave the Chinese delegation a taste of the Bahamas by modelling Androsia outfits, performing ‘Burma Road’ and dancing to the National Youth Choir’s ‘Celebrate’.

Minister Fitzgerald told the students: “Today, you have brought China to the campus of Garvin Tynes Primary School. As a result of this you will be knowledgeable about the Chinese people’s rich culture; their exemplary work ethic; their foods; their language and contribution to the advancement of the world. I hope that you will share this information with others so that they can learn about another culture through you.”

Ambassador Yuan wished the teachers and students a happy New Year and thanked the principal for her invitation and the students for their performances.

“I have only been here two months and already I have fallen in love with the Bahamas,” he said. “I have deep respect for the Bahamian people.”

The dignitaries cut a cake to symbolise the occasion.

Mrs Mitchell presented the Ambassador with a Bahamian painting and a commemorative plaque. The Ambassador’s wife was given a straw clutch and purse.