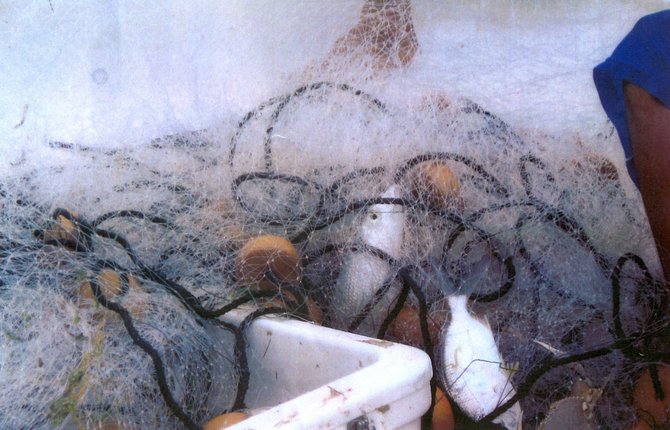 TANGLED WEB: A picture, taken by Long Island bonefishing visitors, that is said to show illegal netting in action

A Long Island bonefishing lodge owner says his $1.5 million investment and six jobs are being jeopardised by illegal netting, which threatens to “wipe out” the industry within the next five years.

Nevin Knowles, head of Long Island Bonefishing Lodge, told Tribune Business that the police were doing nothing to stop a practice that he estimated had slashed Long Island’s bonefish stocks by 50 per cent in the past five years.

This was despite repeated complaints and photographic evidence, which has been seen by Tribune Business, of the culprits in action being provided to the Royal Bahamas Police Force.

Mr Knowles told this newspaper that illegal netting, unless curtailed, threatened to “kill the goose that laid the golden egg” for Long Island tourism, as bonefishing/sportsfishing were among the island’s key attractions.

A 2010 economic impact study by the Bahamas Flats Fishing Alliance showed that the industry had an annual $141 million impact, and illegal netting is now placing this in jeopardy - especially where Long Island is concerned.

And, especially worrying for the industry and Bahamian tourism (particularly in the Family Islands), is that news of Long Island’s problems is beginning to circulate internationally.

One of Mr Knowles’s recent guests, Courtney-Marie Martin, writing in the Internet-based fishing blog, skinnywaterculture.com, said of her Long Island experience: “I witnessed first-hand one of the major conservation issues currently going on in the area, with gill netters present not far from the flat we just fished.

“My heart broke. If we don’t preserve what little we have left, this will all be gone, and there will be no future generation to follow in our footsteps. This is apparently an on-going, don’t ask don’t tell, problem on the island. With a heavy heart, and the thought of bonefish being gill netted, along with other innocents by catch, we headed in.”

And the pictures of Long Island netting were supplied to Tribune Business by Terry Gibson, senior editor of industry publication, Fly & Light Tackle Angler Magazine. This only enhances the chances of negative messages getting out to the Bahamas’ target bonefishing market

“These last couple of weeks they’ve been hitting us so hard. It’s unbelievable,” Mr Knowles told Tribune Business of illegal netters, who are seeking bonefish as bait for yellow tail fishing.

“If this keeps up for five years, our bonefish population in Long Island will be gone,” he added. “They’re using, at the last estimate, a $58,000 bonefish to catch a 90 cent snapper, and they’re killing our industry.

“The tourists go to the Out Islands for the fishing. That’s the only thing that attracts tourists to Long Island. They’re killing the goose that laid the golden eggs.”

Mr Knowles said illegal netting had been occurring for “years and years”, but had become “noticeably worse” in the past few and was now threatening to wipe out bonefish stocks by preventing the fish from spawning.

“The bonefish stocks, every year they’re decreasing,” Mr Knowles told Tribune Business. “In another five years, we’re not going to have any stock. It’s decreased by at least 50 per cent or more over the last five years.”

With fewer bonefish to catch, Mr Knowles said tourists would fail to re-book and not come back if their experiences failed to match expectations.

He added: “I had some guests that fished last week. We went out on the flats and there was hardly any fish there. We knew someone had been there netting, and can see where the net had dragged on the flats.”

The netting, catching and buying/selling of bonefish is illegal by law, with punishment involving a $3,000 fine or one year in prison. But, here again, the Bahamas appears not to be enforcing the law, this time with respect to its own marine resources and the environment.

Mr Knowles said he wanted to “put some heat” on the police to take action, adding: “When we call the police they don’t help us. They don’t take it that seriously. They don’t realise the implications, and how much money bonefishing brings to the Bahamas.”

He added that illegal netters had even got “in your face”, questioning why he had called the police about their activities - raising questions about whether the culprits were being ‘tipped off’ about his concerns.

He added that Long Island’s bonefish stocks would be “right at the top” without illegal netting, and questioned how the industry would be impacted in other islands where it was just starting to “take off”.

“In five years our bonefish industry will be gone,” Mr Knowles told Tribune Business, expressing fears for his $1.5 million investment in his Deadman’s Cay-based property.

“It will be so low that there will be no tourists coming back. Without fish, they will not be coming, so if they [netters] don’t stop Long Island’s tourism industry will be to zero in five years.”

The Bahamian Flats Fishing Alliance’s study said expenditures by anglers were not just for guides and accommodations, but also for meals, transportation and other goods and services that benefited the economy.

Anglers spent about 27 per cent more than general visitors per visit, and 17 per cent more per visitor night, further emphasising the importance of recreational flats anglers to the country’s economy.

The islands with the greatest economic benefit from flats fishing were Andros and Abaco, but all islands benefited from flats anglers. Direct expenditures on the Family Islands ranged from $3 million to more than $18 million.

The study said that this economy can be maintained through good conservation of coastal habitats, water quality, and protection of the fish populations.

Our police do not know our laws much less enforce them. This nation is crooked with a capitol Z. Nobody needs the U.S. to tell them so, it is a fact.

The bonefish guides, lodge owners and the police know who the commercial fishermen and bait suppliers are............ just stop ignoring it and arrest, charge and convict the law breakers. As far as the policemen are concerned........... as long as they can get free fish from the fish houses, the netting will continue.

Sheep, you are correct, the water is shallow in this nation, a free meal will buy you the world. People do not think ahead at all.