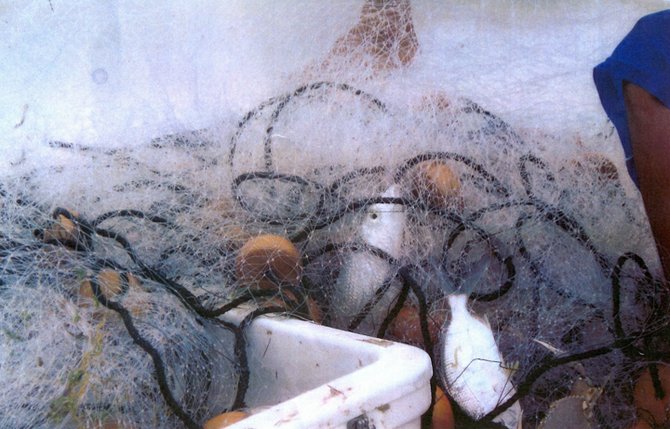 TANGLED WEB: A picture, taken by Long Island bonefishing visitors, that is said to show illegal netting in action.

Terry Gibson, owner and editor of Flight and Light Tackle Magazine, told Tribune Business that other tourists would likely have been “taken aback”, and potentially deterred from returning to the Bahamas, over how their guide was treated.

He praised the guide, from Long Island Bonefishing Lodge, for “not rising to the bait” and understanding that his first obligation was to his guests’ safety.

Yet the incident highlights the concerns raised in Tribune Business earlier this month by Long Islanders in the bonefishing industry over illegal netting, which they fear will wipe out multi-million investments and jobs in the sector within five years.

While unable to quantify the impact from illegal netting on the island’s bonefish stocks, Mr Gibson warned that if the practice continued it “can’t possibly bode well for tourism” and this nation’s $141 million bonefish industry.

Pointing out that other “marquee” fishing destinations had seen fit to ban the equipment used in illegal gill netting, Mr Gibson added that allowing this to continue was also at odds with the Bahamas’ reputation as a world-leader in fishing conservation.

Recalling his unsavoury encounter, he told Tribune Business: “There were seven sports fishing journalists over there fishing with Nevin Knowles and Long Island Bonefishing Lodge.

“We had come to the end of a nice week when some fellas in a flat boat came along. One of them started mouthing off to our guide: ‘What are you going to do about it?’ and ‘We’re coming in to catch your fish’.

“He was baiting him right in front of us,” Mr Gibson added. “I couldn’t understand everything he said, although I was trying to. The guide was very professional and did not rise to the bait. He understood his main responsibility was our safety and well-being, and making sure we had a good time.

“It’s not a good thing to put in front of tourists. Other tourists might have been taken aback by this guy’s attitude and presence of gear for people to gill net fish.”

Mr Knowles, of Long Island Bonefishing Lodge, had previously warned in Tribune Business that his $1.5 million investment, and jobs of his six staff, were in jeopardy after illegal netting reduced the island’s bonefish stocks by 50 per cent in the past five years.

Complaining that not enough was being done to combat the practice, Mr Knowles told this newspaper that illegal netting, unless curtailed, threatened to “kill the goose that laid the golden egg” for Long Island tourism, as bonefishing/sportsfishing were among the island’s key attractions.

Mr Gibson, meanwhile, suggested that the Bahamas follow the lead established by the likes of Belize and Florida.

“A lot of destinations that are marquee fishing destinations have had the wisdom to ban and outlaw that kind of gear,” he told Tribune Business. “If it [illegal netting] continues to expand, it can’t possibly bode well for tourism and the people that support it. It could be quite an impact, devastating if completely unchecked.”

The experienced angling journalist added that the bonefish was “a huge forage fish” that formed a vital part of the food chain for larger predators. He pointed out that Florida’s bonefish population had suffered an accelerated decline as a result of suspected netting off eastern Cuba.

“In an ecosystem like the Bahamas, where there’s potentially a lot of exchange due to the gulfstream, if you wipe the fish out in one place it can affect other spots,” Mr Gibson said.

He noted that the illegal netting was in sharp contrast to the Bahamas’ position as “a leader in global marine conservation” and sustainable fisheries practices.

Mr Gibson said the Bahamas was the first location in the world to ban long line fishing, some 20 years before Florida did, and also the third or fourth nation to ban shark hunting.

“I would hope that the Government will take a really hard look at the gill netting issue,” he told Tribune Business. “In most places where it’s banned, the economic and cultural returns have been realised in hugely positive ways.”

Mr Gibson said there were other ways to fish besides gill netting, such as ‘hook and line’ and cast nets.

The netting, catching and buying/selling of bonefish is illegal by law, with punishment involving a $3,000 fine or one year in prison. But, here again, the Bahamas appears not to be enforcing the law, this time with respect to its own marine resources and the environment.

Mr Knowles previously told Tribune Business that illegal netting had been occurring for “years and years”, but had become “noticeably worse” in the past few and was now threatening to wipe out bonefish stocks by preventing the fish from spawning.

“The bonefish stocks, every year they’re decreasing,” Mr Knowles he said. “In another five years, we’re not going to have any stock. It’s decreased by at least 50 per cent or more over the last five years.”

With fewer bonefish to catch, Mr Knowles said tourists would fail to re-book and not come back if their experiences failed to match expectations.

He added: “I had some guests that fished last week. We went out on the flats and there was hardly any fish there. We knew someone had been there netting, and can see where the net had dragged on the flats.”

However, police sources took exception to Mr Knowles’s allegations that they were not doing enough to crack down on, and pursue, illegal netters.

One Long Island-based officer, speaking vie e-mail on condition of anonymity, agreed that the issue needed to be addressed publicly “after being ignored for so long”.

They added, though, that each report of illegal netting was investigated, with all cases “taken seriously”.

The officer added: “Areas prone to ‘netting’ reports are not easily accessed, and since law enforcement cannot be everywhere, we depend on locals for information in order to prosecute offenders of the law.

“The obstacle to law enforcement is that the persons calling the police refuse to give a description of the boat used for netting,the operators of the boats used or the vehicle that was used to access the area, let alone name the locals involved. It’s impossible to expect police to catch culprits that are 30-40 minutes away from the police station with only vague information.

“I’m sure that more can be done to deal with this issue. However, I do wish there was a fair and balanced report made to show shortcomings in the system as a whole as opposed to laying issues on one group/agency,” the officer added.

“Sometimes it is hard to be a police officer; many persons in our society have no idea the number of ‘hats’ an officer wears. We are expected to police the country, but also act as babysitters in the schools, social service agents in some cases, marine officers for fisheries violations, immigration officers, first responders etc... We do all of these thing and folks demand we do more.”

Ignorance is on display in this nation 24/7/365, the antagonist should have been marching on Bay St. with the rest of them. "i'm going to kill all the fish so my children have nothing and I am proud that I am doing so"....Super Smart Guy!

While some of us complain about foreigners, look right under your nose. Who buys crawfish, both undersize and out of season? Grouper, out of season? Hunting, out of season?????? We nneed to grow up as a country. Somehow we must legalize & popularize a "CITIZEN'S ARREST" some effective type of enforcement. Or at the least fine some of the culprits in a fashion that sends a message. If we keep this up............. Well we all know this story. I'm not discounting severely penalizing the foreign or political culprits as well.