Queen Appoints Dame Marguerite As The Next Governor-General 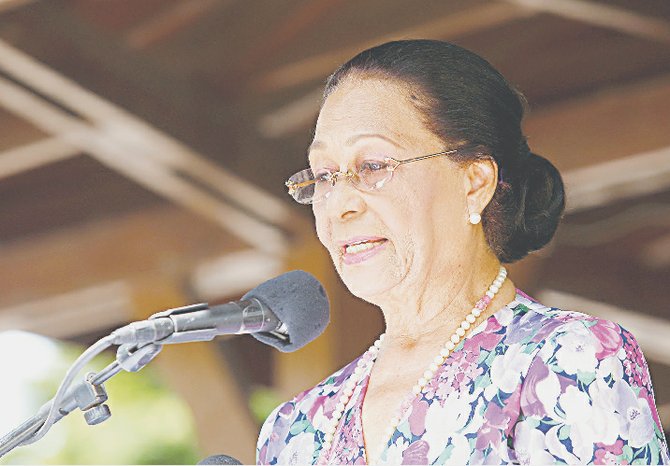 DAME Marguerite Pindling, the widow of the country’s first Prime Minister, has been officially appointed as the new Governor-General of the Bahamas.

Dame Marguerite, 82, will be sworn in tomorrow at Government House. A farewell ceremony will be held tonight for Sir Arthur Foulkes, who will formally demit office tomorrow, according to a statement released by the Cabinet Office yesterday.

The statement read: “Her Majesty Queen Elizabeth II, acting in her capacity as the constitutional head of state of the Commonwealth of the Bahamas and pursuant to Article 32 of the constitution, has been pleased to appoint Dame Marguerite Pindling to be the next Governor-General of the Bahamas.”

Dame Marguerite will be sworn in by Chief Justice Sir Michael Barnett, the statement added.

In addition to being the high-profile wife of Sir Lynden Pindling for 44 years, Dame Marguerite spent several years as the chair of the fund-raising committee of The Bahamas Red Cross. She has also helped with fund-raising for the Hope Dale School and the Children’s Emergency Hostel. The self-described “barefoot girl” from Andros was born in Long Bay Cays on June 26, 1932.

She has served as deputy to Sir Arthur when he was out of the country.

For weeks it was speculated that Dame Marguerite was the front runner to replace Sir Arthur when he demits office; however, officials last week were tight-lipped over whether or not she had been chosen. The recommendation for Governor-General is made by the Prime Minister.

Last month, Prime Minister Perry Christie confirmed that Dame Marguerite was under consideration for the post. However, her consideration was brought into question after it was revealed last month that the real property tax account for her home in western New Providence was in arrears.

According to documents obtained by this newspaper, payments had not been made since 2000, the year Sir Lynden died.

The bill of more than $306,000 was paid in full after the information was made public, according to a well-placed source in government.

In an interview with The Tribune last month, Mr Christie said he did not think the tax delinquency was indicative of a double standard for high-profile Bahamians, but rather evidence of a political agenda. He added that what he saw as a politically-motivated leak of her tax information was “impeccably” timed.

She was elected exactly because she knows where the bodies are buried. Don't worry she will croak soon.

Did yall expect anything different???????? Typical PLP cronyism ....... only thing this time we are resurrecting the worst name connected to the old PLP .......... PINDLING

Yeah, shi##! CRONYISM at its finest!

If these two red actions ain't enough to makes Loretta fume at the mouth. what in the hell will it take? Nice see the reds Comrade red shirts leader Minnis and Marsh Harbour's MP Edision are supportive of PM Christie. First, we have Minnis coming out in support of Mrs. Pindling as Governor-General, followed by Edison announcement today that he WILL vote in favour of the PLP government's "regularization" of the numbers rackets.

Nygard stem cell treatment. He told you it reversed aging and you didn't believe him. Now look who has the last laugh.,.

If he did reverse it why they both still look like shit?

Back to the drawing board? (I actually think she looks great for 82 though, Nygard is another story)

Great, a giant leap back to the good old days!

I wonder how much the big welcoming gala will cost the Bahamian people as another Pindling is installed. Ugh! I know the Government House staff are miserable at the prospect of their new tenant, as she is said to treat staff badly. Shame that this is apparently the best we can come up with to repesent our country.

Backward, Downward, Reverse, All For Me.

So a tax dodger moves to the top. Looks like you are more likely to get ahead if you break or ignore the law in this country. Those of us who follow the law are the ones likely to be shafted. As a citizenry, we should ALL refuse to pay taxes for one year and see what the governement does then. May we would all get promoted or given high paying jobs/contracts. WHO IS WITH ME ON THIS???? LMAO!!!

I may be wrong, but I do not believe they put young people in the position of Governor General. quiet a few of them are still alive. Mr. Turnquest, Mrs Ivy Dumont, Mr. Hanna and now Sir Arthur. They were all deserving of the position .

Mrs. Pindling will do well, Show her the deep respect that you will show your dear Mother or Sister. She did a lot for the struggles that persons from over the hill endured, Her time on earth is passing just like all of us. Let us try to be a kinder Bahamas, Even when we disagree, with others. We must still respect them.

brother or sister Birdie- I do hope when I come to steal from you it isn't a problem. I agree with justthefactsplease- we may as well all be delinquents in this town and see how far ahead we get. It just might work !

This is a disgrace but truthfully, I didn't expect more..

My brother is a thief so therefore it is only right that I am a thief as well.

Comrades for a woman who has worn the wrinkles of many a poor Bahamaland - looking for a future for their children, equal to the UBP's Eastern Road Bahamalanders's children. Mrs.. Pindling is still a beautiful woman and the apple of her late husband's eye. Mrs.Pindling as our nation's 10th Governor-General should be held in high esteem by all we. Thank you leader Minnis for being a red class act over her appointment.

Let's not forget, Tal, it was a white knight UBP who welcomed Mrs. Pindling Sands into his law firm, so let's not go there with the downtrodden over the hill crap. Yes, Mrs. Pindling Sands earned it and is a good attorney, so maybe it's about that and not entitlement. Some conveniently distort history for their own purposes.

What we all must never forget is without the giant leaps which resulted from her late father's many accomplishments as the nation's premier/prime minister, "woman"like Mrs. Pindling-Sands (black and white) may never have made it to the partnership of such a law firm. Great men never do it alone...and we do know for a fact that Mrs. Pindling was called upon many times by the late former PM to render her "trusted" input into his decision making. The man loved his wife and the mother of his children. Contrary to what has been said about Pindling, the man did not have a racist bone in him. I can tell you stories of many, many white Bahamalander's (rich and poor) who "successfully" turned to the former PM for help.

This country is so messed in the head it is beyond words. I know that the majority have a deep seated inferiority complex and that is what drives them to venerate those that really should be in jail. That inferiority complex also is why we allow those in power to trod all over us and we still hold them in high esteem. When we start to respect ourselves is the day we will demand a class of leadership that we can look up to and emulate, until then, well you can see what we have now. Nothing that I would tell my children to look up to or emulate, that is for sure. I say that if you are honestly proud of the leadership of this country, you have pretty low standards!

I guess the Queen has even forsaken us now. She could have said NO - but didn't.

Yall need to stop hatin still ya c. WHEN the FNM was in power they appointed persons who wore RedShirts. If the DNA was in power we would be seeing GREEN. So pull out your color charts. The geico lizard is green, so is Kermit the Frog. Big Bird is gold and the devil wears red! Jus sayin..

The opposition to the appointment has nothing to do with colour charts. Get a copy of the Commission of Inquiry report and it will give you a clue what it's about.

Her bio is incomplete as it omits mention of her stint as a "lady of the night" before LOP came into the picture. Yes, there are still some of us alive today who are old enough to remember what went on on what streets in the wee hours of the morning.

No hate here, I do not care about party, they both are not up to what I would expect from true leaders. The people that put themselves forth for leadership roles in this country are interested in that role more for personal gain than anything else. The people in politics today are all the same. They all know who is doing what and they all are complicit in the various nefarious deals and underhanded projects. I will guarantee you one thing, not one of them would step up and inform on another of their ilk. Red, yellow, and probably green, they are all the same, and old boy network that looks out for them and theirs, to hell with the rest until it is time for votes. This little country is Crooked with a capitol Z for now but one day the people will wake up to the reality that they have been taken for a ride.

Hey its been awhile ,how you doing you little freak ,still living on the couch in mummys front room ,,what happened to your lil helmet

And we are the same set who complain about crime, especially murder. The trickle down effect.