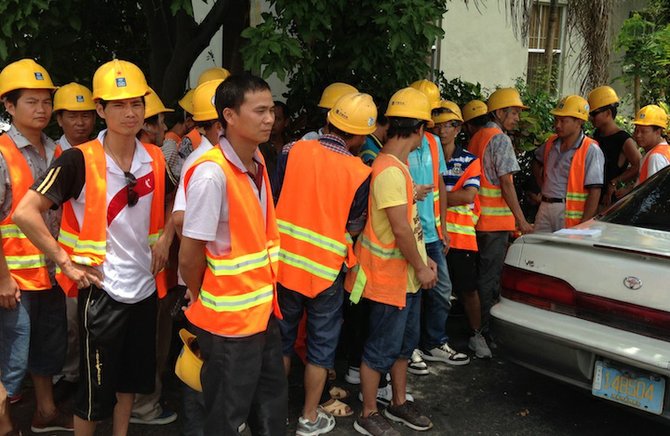 A GROUP of Chinese construction workers from Baha Mar are protesting outside the Chinese Embassy on Shirley Street, Nassau, claiming that they have not been paid in six months and wanting to be repatriated.

Around 60 workers from the China Construction America company arrived outside the Embassy at lunchtime and after two hours were still waiting to see whether they or a representative team would be allowed in. Police were called and the workers were corralled in a car park across the road from the Embassy compound by several officers while two patrol cars blocked the entrance.

The Chinese workers are claiming that they have not been paid since the end of last year and that they had been threatened when they complained. They said they had gone to the Embassy to seek security.

The workers had walked from the Baha Mar resort in Cable Beach along Bay Street to the embassy at the Montagu end of Shirley Street.

Robert Sands, Baha Mar's Senior Vice President of External Affairs, said: "Baha Mar is committed to the fair and equitable treatment of all workers associated with the project. The workers in question are employees of China State Construction, we are supporting China State Construction in their investigation into (the) concerns raised by their workers."

The following is a statement from the Chinese Embassy:

"On 9th July 2014, about 40 Chinese workers came to the Embassy of the People's Republic of China, seeking the Embassy's help to resolve their disputes with their employer. Officials of the Embassy arrived IN THE FIRST SCENE to meet with the workers and conduct inquiries. The Embassy officials had been mediating between the Chinese workers and their employer, while both parties were required to resolve their dispute through negotiation in accordance with law and their contracts.

"The Embassy requests both Chinese companies and workers to abide by the laws. We trust that the ligitimate rights and interests of both parties will be protected."

Hope they get their money. No fun being in a foreign country at the mercy of a slaver

Anybody know what happened to the last group that protested? The ones found somewhere on Prince Charles Drive, as they didn't know where the embassy was! Deplorable that we are sanctioning this sort of human rights violation.

Good Opportunity for the new GG to win some brownie points. Looks like another international headline for the Bahamas.

Another bright spot. Internationally The Bahamas is looking like a hell hole with Zero law and order, vast corruption, and bribery the order of the day. Now add to the list imported Chinese Workers revolting. Happy Independence. What a joke this country has become. Bought and paid for.

Before jumping to conclusions....how about getting all the facts first people before making stupid knee jerk reactions (which is typical here for sure!)....

I wondered when they would finally go public with this.

People need to remember that these Chinese workers are not "baha mar" employees, but China Construction who pays them, not Baha Mar! Get your facts right people...

So if dat almost-white massa hires a corporation to manage he slave labour he ain't no slave massa? Das some interesin' logic ya gat deer!

It's interesting you should say that, there was a conversation on MSNBC earlier this week about the practice of large companies outsourcing labour in developing countries so there's separation between them and the conditions under which the labourers work. But the issue for me isn't who is employing them, but more so that it's happening. The same probably happens to the Haitian labourers.

We drove by this group on Shirley Street today. Wondered what was going on. Union man was also there (the one formerly from BTC who had Bay Street all blocked up a few years ago.)

This is unacceptable. Working for nearly 8 months without compensation?In a foreign country? That is a recipe for disaster. Hopefully this gets sorted soon.Lets not be disrespectful to these people in their misfortune.

No we don't know the full details. But I suspect that an employee would know whether or not they've been paid in the last six months... Maybe they signed a contract they didn't understand...lots of possibilities. Bottom line they're not getting what they expected, and if they've gotten room and board but no take home salary in six months, they're not getting what any reasonable employee should expect, especially for construction work. (I've never heard of a construction worker receiving a lump sum payment after all work is complete) Would be equivalent to indentured labour...

Feel sorry for these guys, in a country where they look different, don't natively speak the language of the host country, ongoing tensions with the local population in terms of jobs, no transportation and possibility that they're not being paid? thats a very bad situation to be in. Ripe for exploitation. Didn't we have a similar situation with the roadworks?

I don't care who employs them...BahaMar or the Chinese Construction Co...pay the damn workers!! And for people to start defending BahaMar saying it's not their fault...yes, it is...the firm you hired to manage the contractors and construction is failing it's staff and it has a DIRECT reflection on how BahaMar conducts its business and with WHOM BahaMar contracts out to.

Very sad indeed. I would hate to be in a similar position abroad. Imagine being a Bahamian working in Russia and not getting paid and most likely not having any source of funds to even buy a ticket home, or anywhere for that matter. Where would you turn? At least they have an Embassy here. These poor people probably don't even have access to their travel documents. It is a terrible situation for anyone to be in.

These Chinese workers surely have work permits. If so, they fall under the Bahamas labour laws. Where is Shane Gibson in this? If the people have not be paid, then pay them, It's pretty damn simple.