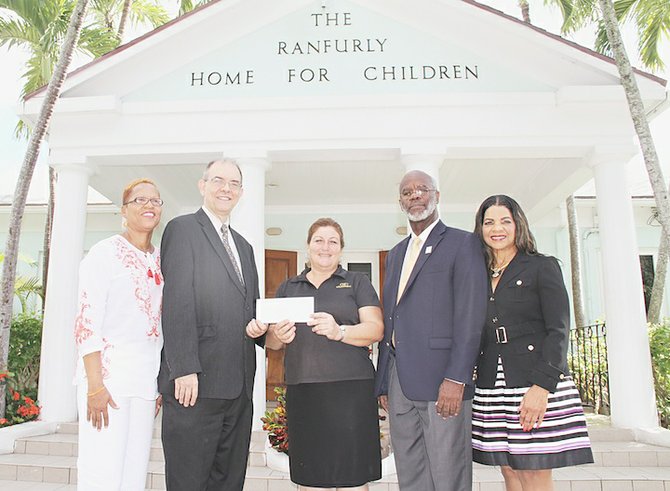 COMMONWEALTH Bank expressed its continued support for the Ranfurly Home for Children yesterday by donating a $10,000 cheque to the organisation to help ease their current financial situation.

Urging the public to help as well, Commonwealth Bank president Ian Jennings said: “Donations like this are not about the money. They are about creating opportunities. This residence provides far more than a roof over the heads of children who, through no fault of their own, are not able to live with a biological parent. We urge others to reach into their hearts and pockets to support Ranfurly Home for Children.”

Presenting the cheque to Ranfurly president, Alexandra Maillis-Lynch, and the Director, Alex Roberts, Mr Jennings referred to the occasion as “a much-anticipated summer ritual,” which would draw attention to the home’s urgent needs.

The Ranfurly Home is a privately-operated organisation that has served the community for more than 50 years by providing a safe environment for children who have been abandoned, abused or neglected. Three weeks ago it issued an urgent appeal for funds, saying it had only $37,000 in its bank account and with monthly bills of around $20,000 to meet.

According to Mrs Maillis-Lynch, the Home receives a small government grant and depends mostly on public and corporate donors to sustain the organisation’s daily operations. Last month, the Government responded to the call for help by saying it would step in to provide assistance and engage with the Home’s management to assess needs.

The home, which holds about 30 children on average, provides food, shelter, clothing and counselling for its residents, and needs an annual budget of around $500,000. “The largest part of our expenses is staff, which is needed on a 24-hour basis to take care of these children,” said Mrs Maillis-Lynch.

The Home also hopes to expand by adding more dormitories to house more residents. “I feel it would be a waste if, at this stage, we didn’t grow to what Lady Ranfurly really dreamed,” said Mrs Maillis-Lynch. “We are looking for partners in education – people who are willing to take one or two children and give them an education, which would greatly eliminate what we have to spend every year and give us the chance to concentrate on expanding.”

Despite rumours of closure a few weeks ago, the Ranfurly Home persists with plans to create better opportunities for children they receive with learning disabilities. The organisation also hopes to build a transitional home for children when they reach a certain age and have not been adopted or found a new home.