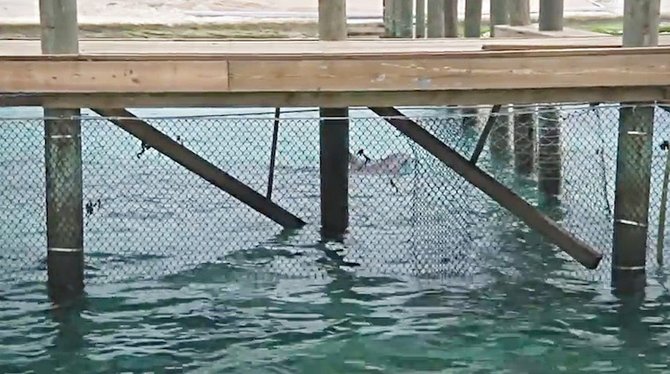 One of the dolphins in captivity at Blackbeard’s Cay.

ENVIRONMENTALISTS hailed victory yesterday after a landmark Supreme Court ruling quashed and revoked the government’s permits and approvals for the $8 million Blackbeard’s Cay tourist attraction, which included the import of eight dolphins to the Bahamas.

ReEarth, an environmental group, had brought a judicial review against the government and Blue Illusions Ltd out of concern for process and marine life protection and sought the revoking of licences to import the dolphins and to have them moved to an appropriate location.

After the ruling, environmentalists told The Tribune they had waited 24 years for an historic ruling like yesterday’s decision.

Sam Duncombe, the founder of ReEarth, said: “Finally we’ve been able to bring one of the developers with dolphins in captivity to court over the circumvention of the Marine Mammal Protection Act all over the place – substandard conditions, no shade, no protection from hurricanes.

“We are absolutely thrilled that the judge has basically looked at all the work that we did over the last year – for Blackbeard’s Cay in particular – and has seen the merit in our argument why these animals should not be in captivity and that the government cannot circumvent its own laws.”

Justice Stephen Isaacs quashed premises licence and site plan approval that had been granted by the respective ministers responsible for agriculture/marine resources and Crown lands, having found that neither had been granted or could have been granted under the law to Blue Illusions Ltd.

The application further asked the court to quash any other approvals granted by the government related to crown land, site plan approval and to halt any development of the land that was currently taking place at Blackbeard’s Cay, located off New Providence’s coast opposite Sandals Royal Bahamian Resort and Spa.

The respondents had contested the ReEarth application was without merit because it did not disclose that any decision taken by the respondents was “ultra vires, unlawful irrational and unreasonable.”

Joseph Moxey, lawyer for Blue Illusion Ltd, asked the court to stay the execution of the judgment until they could appeal to the Court of Appeal.

Justice Isaacs responded that the stay application was not necessary given that the execution of the judgment would not take effect for six weeks, the same time limit that the respondents have to appeal.

ReEarth’s Sonya Alvino told The Tribune they were thrilled by the outcome of the proceedings. “This is huge for us and for the country,” she said.

“It took us a heck of a lot of digging, asking questions, and continually writing to government officials, in order to get information and we were denied information which forced us to the courts. The opposition said it is likely that they would appeal. We don’t know whether they will or not. They’ve got six weeks to appeal before any execution of the order will be granted. We’ll fight that and if we need to, we’ll go all the way to the Privy Council.”

Ms Duncombe said the laws had been circumvented for some time. “That is basically what has been happening for years because the Marine Mammal Act speaks to doing facilities in the highest international practices and there’s not one facility in this country that is up to par. So in actual fact, they should all really start closing down.”

She noted that the group “has 95,000 signatures on it against this facility and any new facilities and it also asks for the facilities that are in existence to date to stop breeding their animals and to start looking toward a tiered closure of all of the facilities that exist so that the animals that can be rehabilitated and released can go back into the wild and those that cannot be released, can remain in sanctuary of setting where they can live out the rest of their lives with some kind of dignity.”

Wonderful news, but the pressure must be kept on, as they are sure to appeal this welcome decision. Well done!

Most black Bahamians dont care about no dolphins or sharks....... just snapper and goggle eye....... we cant afford grouper no more and the Dominicans gonna soon wipe out da conchs....... SMDH. So let the white peeps fight over these dolphins and sharks..... at least the government will soon have plenty of the sharks to sell to the Chinese................ LOL

Really? Are you that blind? Are you unable to comprehend what this case was?

Regular Bahamians just took the government to court for running wild and breaking the very laws they themselves created, and all you can do is make racist comments thinking you're being 'clever' or 'amusing'.

Umm, the Duncombe name has been in the Bahamas since the late 1700s and Alvino has been here from Cuba since the mid 1800s, so know your own damn history before you spout more crap. The joke's on you general ignoramus!

Make up? Ha, you are clearly showing your laziness and ignorance in spades. Go look it up if you don't believe. Learn something about the Bahamas instead of spouting your ignorant bigotted rubbish! LOL!

WOW!!! The Bahamian courts are actually making some excellent decisions recently. Boy I am a super proud Bahamian now. I feel like the people now have a voice and that people with power (the courts... not the government) are now listening and feeling our plight. Hopefully these recent court decisions will force those whom we voted for to do the right thing from the beginning as to avoid these court battle's and embarrassment.

Don't get too excited...a couple court victories are a mere drop in the bucket in this fight...

This is another "shot" in the battle for our new bahamas!!! The government WILL NOT appeal this ruling!! Unless they base they appeal on the fact that the judge was drunk drunk when he made the ruling! And them will have to bring the beer bottles they saw the judge drink the rum from to court to get that ruling overturned! LOL!

sheeprunner, you don't have to have arrived with the original Eleutheran Adventurers to be Bahamian -- paper or otherwise -- to have a geniune interest in protecting the very resources that make our Bahamaland so sought after by the tourist. If we destroy it, what are we left with? What are our children left with? The typical BAHAMIAN (BLACK., WHITE, PURPLE, YELLOW or POLKA DOTTED) should care deeply about the issues affecting our country, and the sooner we work TOGETHER instead of spouting divisive racial hatred, the sooner we can leave the banana republic label behind and become a country we can ALL be proud of.

I am happy that this has happen i love dolphins an other animals of the sea an the place that they were held in was not up to building code. When the F.N.M was in power they would not give them the grant to open this so call facility now P.L.P are again in power they have payed of certain MP's n started building the pens were not drenched properly an when asked why they are so shallow the so call owners have no clue they are not from here an your probably asking your self how could all this have been done an no one seem to be checking but now it has all shown its face an the so call owners have this thing on playing stupid an there names are Vicki An Sameir two wicked people that say they are making this place for the Bahamian people but on the island all they had working for them were person from Cuba. They pretended to have no clue about anything but when you Google the So call owner (male) he has been in the same situation before so God be the Glory an he never sleeps an if u want to know more Ladies an Gentle men the world wide web (www) had two so call trains that are also the reason for the out come for these animals an there well being Cornelius & Wendell

I have never read such c**p as general crazy is spouting - it is people like him/her that keep our beloved Bahamas in the dark ages. Dilly/Harry, it is not even worth starting a discussion with this person. Ignore this rubbish like the rest of us.

The one time civil Bahamians are able to sue and have government reverse ( apparently corrupt) development permissions, and there are those on here who's only comments are filled with vitriolic and racist statements. Do they not realize that it is their own rights as citizens that are being protected?

There are apparently a couple of bullies that post on these pages.