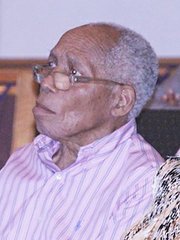 FREE National Movement Leader Dr Hubert Minnis expressed regret on behalf of his party over the death of cultural icon and former member of Parliament Edmund Moxey, who died on Monday.

Mr Moxey was a meritorious council member (MCM) of the FNM, a former MP for Coconut Grove, and parliamentary secretary in the Office of the Prime Minister.

Dr Minnis recounted the tenacity and commitment to public life that Mr Moxey displayed during his career.

“Mr Moxey engraved his place in Bahamian history by his visionary development of the Jumbey Village concept, as a centre of traditional Bahamian cultural exposition in an Over the Hill setting,” Dr Minnis said in a statement.

“When the Pindling PLP administration failed to embrace Jumbey Village and removed all government financial support for its continued development in the 1973/74 Budget, Mr Moxey, then a PLP MP and parliamentary secretary, led a one-man demonstration against his own government, and was quickly fired by the Pindling administration.

“As a backbench MP, Mr Moxey continued his internal opposition to his party leadership, but was denied renomination to contest the 1977 elections by the PLP on the ‘night of the long knives’ along with several other PLP MPs, including Arlington Butler, Carlton Francis, Oscar Johnson, Earl Thompson and Franklyn Wilson.

“Mr Moxey continued his struggle against maladministration and the failure of the powers that were to acknowledge and appreciate Bahamian culture firstly by running for election as an Independent in 1977, and then as an FNM candidate in 1982, and in the St Barnabas by-election in 1986, and then as a candidate for the FNM in St Barnabas in 1987. His unconquerable and indomitable spirit in all adversity, during this troubled period of political exile, imbued him with the self-proclaimed title of ‘Muscle & Guts’.”

Dr Minnis said Moxey left “an indelible mark” upon his Coconut Grove constituency, which was later changed to St Barnabas, by being the first MP to personally sponsor and to develop a community centre. It was in this centre that Mr Moxey was able to show his love of Bahamian music to hundreds of children from his inner city constituency, Dr Minnis said.

Mr Moxey, 80, was one of several members of the PLP who were elected to office on January 10, 1967, which brought about Majority Rule. He was a member of the PLP for 10 years then later joined the FNM.

He was elevated to the exalted rank of FNM-MCM in 2005.

“Mr Moxey continued almost to the end to be a valued council member and was both a regular attendee and participant in the deliberations of the FNM Central Council,” Dr Minnis said.

“The Free National Movement expresses its condolences to his surviving wife, Sylvia, children, Sharon, Deborah, Mario and Marva, Marlon and Hope; and proclaims its pride in having attracted the commitment and the service of this truly great Bahamian, musician, cultural warrior, patriot, renaissance man, national founding father and political leader – our friend, MCM and brother, Edmund S Moxey. May he rest in peace.”

My condolences to the Moxey Family, may he RIP! Please, you love your father, do not let the PM or anyone from the PLP govt. speak at his funeral. You cannot stop them from attending unless you request same or have a private service but do not let any of them speak!!

Not to take away from or to deny the cultural efforts of the now late Comrade "Ed" who passed away on Monday but it is a mistake to pretend that Jumbey Village's demise was solely of Pindling's making and not of Ed's own doing, is to ignore the reality of what took years, before it was eventually bulldozed. I spent many days in Ed's government office over Spotless Cleaners in Palmdale and we talked lots about Jumbey Village, so I knew it pretty damn well. Simply put, when the taxpayers money stopped arriving to keep Jumbey Village going, so ended Jumbey Village's chances of survival.