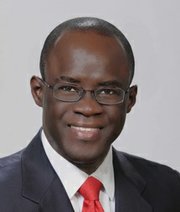 FREE National Movement Chairman Darron Cash has filed a report against the government with Amnesty International over alleged human rights abuses in the aftermath of a search at his home and seizure of personal items.

Citing political persecution in two lengthy narratives released yesterday, Mr Cash called for immediate legislative reform through amendments to the Criminal Procedures Code; the establishment of the Office of the Ombudsman; the enactment of a Whistleblower Protection Act and the enactment of the Freedom of Information Act.

Mr Cash also raised concerns about the warrant police produced to search his home. The FNM chairman said the document was signed by a justice of the peace, who was a religious preacher with no legal training. He charged that the practice should be eliminated immediately as it presented a loophole for “recklessness and abuse”.

Mr Cash added that the warrant misspelt his name, and “suggested” that he was an employee of the Bank of the Bahamas and had possession of its assets.

“As a general rule, justices of the peace have no legal training and truly represent the lowest bar possible when the police must seek permission and present justification for the search and seizure of citizens’ properties,” he said in a statement released yesterday.

“In the case of this national political party chairman this matter has emerged as a clear cut case of abuse of power.”

According to Mr Cash, the Bank of the Bahamas, the government, and the Royal Bahamas Police Force have “unjustifiably” associated him and his family with “whistleblower disclosures” made in the local tabloid, The Punch.

In one document, Mr Cash gives an account of his personal connection to the bank and the concerns over its financial performance for the past seven years.

The statement continued: “This action is just the first step in what I expect will be a multiple step process over the next several weeks to highlight the incidences of human rights abuses by the Christie government and to bring attention and focus to the manner in which our democratic systems and rights are being weakened and violated on a daily basis by this government.”

“Victimisation, intimidation, denial of jobs and contracts are real but they are too frequently underplayed in international reporting,” Mr Cash’s statement added.

Mr Cash added that he remained steadfast in his commitment to public service.

Last month, police officers seized two laptops and a smartphone, the property of Mr Cash, during a search of his home as part of an investigation reportedly into leaked confidential files at the Bank of the Bahamas.

According to The Nassau Guardian, Mr Cash said his belongings were returned less than a week after they were seized, but he has not used them because he believes they were “laden with spyware”.

Mr Cash has since reached an “amicable agreement” with the Attorney General’s Office and the Commissioner of Police concerning his “violation of his rights” case, according to his lawyer.

Speaking outside of the Supreme Court on May 15, Mr Bethel told reporters his client was satisfied with the outcome, while not releasing the details of the agreement.

Mr Bethel said: “A solution, which in the view of my client, vindicates his having brought this matter to court on the basis that his rights were violated, which also acknowledges the right of the police to conduct a lawful investigation.”

The FNM has branded the search of Cash’s home as a witch hunt.

I have no personal axe to grind with the red's Comrade Chairman but it might have come time in the best interest of his party to make his exit.. When primary media focus becomes centered on the party's chairman, it might awake the key stakeholders of red shirts over the next 72 hours to steer the ship of the party away from their Chairman. With less than two years to start acting like they are really a government-in-waiting and not just an opposition party i would think their preference is for a chairman to focus on 2017 and not so much himself.

I find it humorous to listen to the red chairman saying how he is too afraid to use his cell phone or laptop out fear it might have been bugged. You don't have to possess security intelligence savvy to know how to remotely turn on any new cell phone or laptop Comrade Daron decides to go out to buy and use. Guess what Daron, 12 year-old School kids know how to remotely turn on devices to implant listening and live viewing devices. But Daron still has a long way to go to catch to Comrade Rodney Moncur. I don't have time now but later today will return to this blog page to deal with Comrade Rodney funny as hell claims of how he was spied on-in the nude. Like i keep on saying. Why even try make this craziness stuff up. it true.

Why should the political be immune from political persecution? the average citizen is not. the rank and file of both party's faithful have many examples of political discards to refer to. H.A.I. created the "under the bus" syndrome. It is not enough to intimidate the public, one must control all the megalomaniacs standing in the wings. Their own methods be upon them.

Darron Cash seems to be a very desperate man, he believes he is above the law. HIS party had 5 years to pass the freedom of information act and all of the other legislative reforms he is calling for. He should know that Amnesty international knows that his party has been in power for 15 years. and their records are there for all to see..

Mr. Cash is full of him self and seems to be loosing his mind. Mr. Cash must learn that he is a mere Mortal

Have you listened to ur beloved Prime Minister talk in the past two years??????????? He is really LOSING (correct spelling) his mind!!!!!

The man's rights were violated, he should seek redress. There are many of us who are violated by persons in authority and feel powerless

It’s been two years of nothing but lows with no highs for Minnis and his red shirts. In fact along the way this same media grabbing Comrade Daron had reigned the reds chairmanship over his lack of faith in Minnis's leadership. How could I have possibly thought their lowest point had been reached when they locked-arms with their Comrades in that Miami-based Cuban Movement Group? Now, Daron doesn't think Amnesty International has their hands full enough with having to deal with the shocking human rights violations in Syria and the inability of the world to stop it, that they have to find the time to deal with his most silly nonsense - and by sounds of it - Minnis and Loretta are playing along?

I'm so sorry Chairman Daron but what about some that Amnesty relief for your native brothers and sisters. There are more important fish to fry than little Daron. Let me tell Chairman Daron what rises to the level of worthy consideration by Amnesty International-but he, Minnis, Loretta and Dr. Duane would never dare risk the political repercussions of those with Haitian heritage to take up with Amnesty International. I speak of the conservatively estimated 130,000 Haitians living in Bahamaland, that in itself should shock the hell out Daron's reds but it's not even on their political radar. I say, these are shocking numbers when you view them as 130,000 Haitians living amongst a Bahamaland's population of under 380,000. But oh no, let's talk about Daron and his ongoing media grabbing silliness,

Why wasn't the Punch searched? Why wasn't BOB investigated?

Good job Mr. Cash. You know you can't get help from this communist government...

The fact that Minnis, the leadership and fund raising apparatus of the FNM party have done nothing to banish Cash to the wilderness of the disgraced says all most of us voters need to know come the next general election. It will be impossible to take seriously anything the FNM party and Minnis have to say as long as this dodgy man remains its chairman. Keep Cash around and we could easily see another 5 years of the PLP come the next general election!

I find it most interesting that all the big mouth rowdy parliamentarians exposed in the BOB debacle have remained unusually quiet . This confirms to me that the PUNCH is on target. Instead of those sorry ass bastards resigning, they set up the police(yes they did) to do their stinking dirty work. Why would they police get a JP to sign? Most of them are political sycophants and dumb as hell.

Does he know how damaging that can be if Amnesty International really takes this seriously? This can hurt tourism.

He goes to and outside agency to report such BS. Bahamians on a daily bases are being victimize from the police. This is a complaint that should have been vented in the Judicial System. The Tribune should have not given this story the time of the Day.

This is the reason why there needs to be absolute Freedom of the Press and the government needs to get out of the business of owning ZNS.

This guy needs to get on a talk show with a hardcore interviewer and just rip him a new hole so he can be disgrace in front of the public and the world. He needs to publicly be humiliated and resign in disgrace. What is wrong with these people? To do something like that, what is he trying to accomplish?