Gray Warns New Politicians Not To Be 'Fast On Their Tongue' 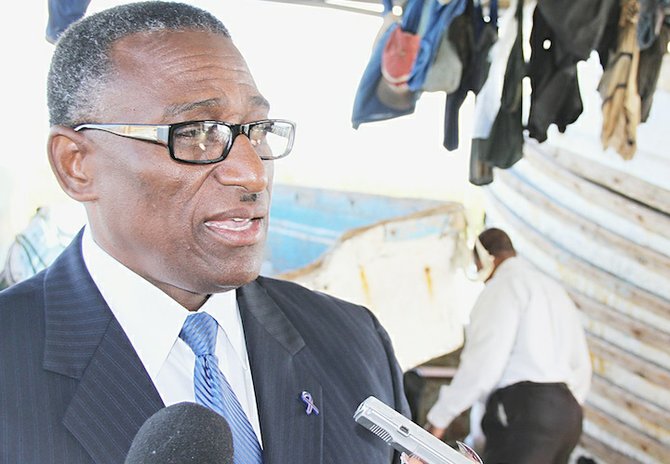 NEW generation politicians must learn not to be “fast on their tongue”, MICAL MP V Alfred Gray warned yesterday explaining that a mistake can lead to the end of a political career.

Mr Gray also suggested that political newcomers must learn how to play party politics and understand that they are not in a “one man band.”

He was responding questions from The Tribune about comments made last week by Marco City MP Gregory Moss, who criticised the government’s plan to implement value added tax (VAT) on January 1, 2015.

Mr Moss said VAT goes against the founding principle of the Progressive Liberal Party and would negatively impact the poor.

When asked about Mr Moss’ criticism, Mr Gray said the approach that the “new generation” politicians take is much different from the “older generation.”

“I don’t know whether there is a difference in generational politics,” he said before heading into a Cabinet meeting. “I think our approach to politics might be different and that too has a place in politics. The older generation might be a little more cautious and a little more careful in what they say and do because they’ve been around a long time. Politics is slippery. If you mess up, you could be out, just by being fast on your tongue.

“Sometimes you just have to be cautious of what you say and how you say it because you’re dealing with party politics and not a one man band. Whatever anybody says can affect the whole party. I have always approached politics with great caution. Sir Clifford Darling once told me that politics is a slippery slope and if you’re not careful, you can fall.

“People have to learn how to play this game,” he said.

During the 2012 general election campaign, the PLP marketed several of their candidates as a “new generation of leaders” who would help to bring new and innovative ideas to the government.

Both Mr Moss and Dr Rollins have been outspoken against some of the government’s policies since being elected.

During his contribution to the 2014/2015 budget debate yesterday, Dr Rollins defended Mr Moss’ criticism on VAT. He said when a politician expresses views that are different from the party line, it did not mean the politician is trying to undermine his party.

“While I do not share the view held by my colleague from Marco City that the implementation of VAT will be disastrous for our country, I do, however, agree with his argument that VAT should be one of several combined tax initiatives used in concert to address our fiscal deficit,” Dr Rollins said.

“He expressed himself, but he obviously did not understand what the facts (are) here,” Mr Roberts told The Tribune.

He added that Mr Moss spoke “out of turn” and is “on a course that obviously only he is on.”

However, he added that the PLP welcomes differing views from party members.

Yesterday Mr Gray agreed with this and said, unlike the previous administration, the PLP government does not believe in silencing those within that have different views.

Status quo politics is deadly to national development ........... this is where we are today.

2 things can happen...Moss shuts up and falls in line with the misguided PLP doctrine (I hope he doesn't)...or you will find Moss 'resigning'...essentially fired. Everything our dear misguided elder of politics here is saying is just making my skin crawl.

Gray, like Christie, Miller, Roberts et al, has spouted so much hogwash over the years that he now truly believes most of the utter nonsense that comes from his parted lips. When politicians like Gray exhibit this degree of warped mindset, they are usually years beyond the time they should have been put out to pasture....which does not speak well at all for the voters in his constituency. I listened to Greg Moss's presentation in the House of Assembly that has caused such a stir within the PLP......it was a most refreshing change to see a young politician capable and willing to speak his mind in the interest of his constituents and the Bahamian people. True to Christie's insecurities as a failed leader, he has now set the likes of Roberts and Gray on Mr. Moss as if to teach him a lesson when in fact it is Christie, Roberts, Gray and Miller (four old flea ridden pot cakes living in the wrong political era of our country) who should be taking a lesson from Mr. Moss.

Old Eddy was mummified many moons ago...he just couldn't find the right pyramid to sleep in.

We would do well to have one or two "fast on their tongue" politicians...we have too many old, dried up politicians with their tongues all tied up by special and self interests

It is my sincere hope that this is the braying of a political breed that is headed to extinction. These idiots wonder why they are vilified and hated by most right thinking Bahamians. The next election can not come fast enough so these dead horse politrickans can be sold to the glue factory just like Cantor was last night in the U.S.A.

But if we vote out the PLP, then who are we going to vote in??? The FNM??? They're just as bad as the PLP. And Brandville McCartney doesn't seem interested in validating his party. The Bahamas is in serious trouble.

.“People have to learn how to play this game,” he said. "

No wonder this country can't move forward.this member of parliament should be thinking about the best interest of the people but here he is worrying about the party.what a disgrace.I am just so sick and tired of hearing the garbage that come out of these politicians mouth

"People have to learn how to play this game." Ohhhhh taking care of the people's business is a game now. These Dishonarable Members need to put in a field, naked and whipped until unconscious. They are a disgrace. party politics should never supersede the welfare of the Bahamian people. The thing is they have the audacity to spew such nonsense in public. They honestly believe they are above the law and can operate without impunity. We really need to uproot this entire system and start afresh.

A senior politician publicly talking about playing games by suppressing the free flow of information members who were elected to represent the people may utter is ridiculous on all levels. We know who he serves, he just admitted it, lets see if the Bahamian people make efforts to get rid of him, wont hold my breath, he or his relative will be in government as long as we have one..