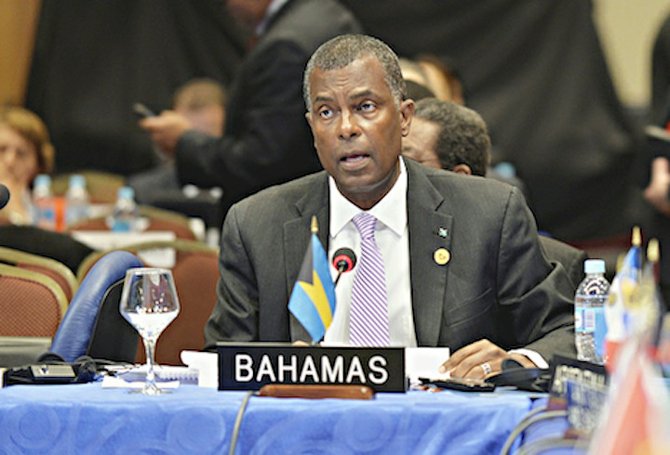 JOHN Kerry, the United States Secretary of State, has stepped in to oversee the investigation of reports that the National Security Agency is intercepting and recording all cell phone conversations in The Bahamas, with the ability to store them for up to 30 days.

Foreign Affairs Minister Fred Mitchell, during his promised report on the allegations, yesterday told parliamentarians that the US has promised to have a report handed over at the beginning of next week.

According to Mr Mitchell, the Listening Devices Act of 1972 is also now under review by the Attorney General because of possible inconsistencies with the Savings Clause in the constitution of The Bahamas. He said that based on a ruling handed down by the Privy Council in April this year, it appears as though if the current constitution’s standard had been applied to the Listening Devices Act, then it would have been dubbed “unconstitutional”. According to the Savings Clause in the constitution, laws that would have already been in place cannot be made illegal.

He referred to a ruling handed down on April 26 by the Privy Council in the case of Newbold et al vs the United States of America.

Mr Mitchell quoted the ruling saying, “It may be that the Bahamian legislature would wish to reconsider whether it, the Savings Clause in the constitution Article 30, remains appropriate in the modern era. Even apart from that, it may in any event be that in light of the board’s view that the Listening Devices Act would not meet current constitutional standards had it been appropriate to apply them, the Bahamian legislature would wish to consider whether the scheme provided by the Listening Devices Act should now be revisited and revised.”

According to the Listening Devices Act, for there to have been any legal recording of phone calls in The Bahamas, permission would have had to have been given by either the commissioner of police or the Minister of National Security after consultation with the Attorney General.

“I am now able to advise that in light of the continuing conversations with the US side, we are allowing diplomacy to take its course for the moment,” he said. “In the meantime, our own agencies are doing a thorough review of the allegations with ongoing reports to the government. I promised to keep the country informed.”

“The other word of caution that I would add is that this (is) in the view of the government and this view does not go to the fundamentals of the relationship with the United States of America. We choose on the basis of available evidence to see this first as an allegation and secondly, if true, as aberrant rather than a regular occurrence.

“For good or ill, we are joined at the hip and we have to ensure that relations continue in all the spheres in which good work is done, rather than dwell on the one possible aberrant irritant in the relationship.”

Last week Mr Mitchell told reporters that the matter had been dealt with.

“From their point of view, they understand that this is a difficult and awkward task,” he said last week. “But it does not change the fundamentals of the relationship. I would agree with that. It has to be something that we can work through and that’s why it’s so important that we find out what the facts actually are.”

“Right now, it’s just this allegation being made in the public domain, which appears to be credible, particularly given the response from the other side.”

In simpler and more precise words, Freddie Boy got told by the U.S. Government: "SHUT UP, OR ELSE!" But don't worry about Freddie Boy, because as most of us know, he's quite accustomed to carrying his small tail between his legs.

Get off Fred's back, you Closet Queen...or should I say, you ass!

Wow!! Are you really that familiar with "Freddie Boy's" body parts? If so, is your ring on your middle finger as well?

As long as we want to keep our preclearance and DEA funding, Fred will only rattle the sabre as long as it takes to make it seem as if he is standing up to the big bad wolf. Then the matter will be forgotten.

On the flip side of the coin, privacy these days is rare, so why does this surprise anyone at all. And to be honest, if listening in to phone calls stops terrorism, illegal drug trafficking, crime, and othe scurges of society, is it really such an awful thing? It's the price we pay for "freedom" these days one might argue. And how many of us have anything important enough to say on the phone that anyone really cares about? Unless you have something to hide, who cares?

AND LET'S NOT FORGET THAT HIGH AND MIGHTY FREDDIE BOY WANTS A NEW PARLIAMENT BUILT WITH A PRIVATE RESTROOM FOR HIM SO THAT HE DOES NOT HAVE TO RELIEVE HIMSELF NEXT TO US POOR DUMB VOTERS! Freddie Boy, let's try get things "straight" here (pun fully intended). You more than any MP in the history of our parliamentary democracy love the trappings of public office (almost as much as you love yourself). You are so enamored by all the hobnobbing you get to do with other government elitists of your ilk during your many lavish trips abroad at the expense of the poor peasant voters you loathe to mingle with back home. IF YOU WANT PRIVACY FROM US POOR PEASANT VOTERS, FREDDIE BOY.....THEN WHY DON'T YOU JUST CRAWL BACK INTO YOUR OWN LITTLE CLOSET?! (once again, pun fully intended!!)

Is Freddie Boy afraid of that small tail between his legs being seen by the poor peasant voter standing next to him while he relieves himself in the restroom? Don't be so shy Freddie Boy!