Pinewood Drainage Repair To Cost Up To $13m 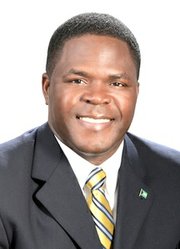 A FEASIBILITY study for Pinewood Gardens’ storm water management is currently before Cabinet awaiting approval before work begins on drainage repair to the flood prone area. The repair is estimated to cost between $8 to $13 million, not the $25 million initially proposed.

Pinewood MP Khaalis Rolle yesterday announced that he will attempt to solve the vexing flood issue that has been plaguing the southern constituency for decades.

The Pinewood MP has envisioned a revitalisation of the area, with plans to regrade streets and also create a canal system for the area.

Mr Rolle said the work may take a few years to complete once it has been started. In the meantime, the Ministry of Works has promised to start clearing all the drains in the area this month.

An analysis of the area, done by Coastal Systems out of Florida, shows that the 1,980 home constituency suffers extensive flooding because it sits on swamp land between two ridges, making it a resting place for water when it rains.

“It is low-lying and it is shallow, so ordinarily when it rains you will see flooding,” Mr Rolle said during a press conference at his constituency office.

“No matter how many drainage wells you put in Pinewood, the problem will still exist, particularly during times when there is high tide. The drains just become overwhelmed immediately because there is no place for the water to go.”

There are over 80 drainage wells in Pinewood that reach depths between 150ft to 200ft. However, those wells have become inefficient because of the area’s geographic characteristics.

Last May, one night of torrential rain and a spring tide resulted in massive flooding throughout several parts of southern and eastern New Providence, with the hardest hit areas, including Pinewood and Yamacraw. Over 1,500 homes in Pinewood were affected by that flood.

The work scheduled to be done in Pinewood will include the entire southern corridor of New Providence. That includes South Beach, parts of Kennedy Subdivision and Bamboo Town.

“This work will include regrading some of the roads, and creating a way for water to run off,” Mr Rolle said. “The run-off will be into the Seabreeze canal and other areas identified.

“The beauty of the plan that has been identified is that it helps us to create a whole new city in the southern district. The canal system will basically create waterfront cities that will also have an impact economically. We’re going to allow those residents to develop a lifestyle that you commonly see in the east and west, like in Sandyport,” he added.

“Now the underwater run-off will not create flooding in other areas like Seabreeze because it will be in a controlled system through swales and piping. It will be an organised way to move the water from Pinewood into areas that can accommodate it. The Seabreeze canal just happens to be one of those areas.”

According to Mr Rolle, one of the companies involved in the development of the constituency has agreed to cover a portion of the cost for the drainage work.

He did not give a timeline for the project.

However, Mr Rolle said he will see to it that it begins sometime in the near future.

The MP previously told The Tribune that when the government considers companies to carry out the work, Bahamians will be given first preference.

There is currently $300,000 in the government’s budget to clear drains throughout the country.

This $13 million should come out of Frankie (aka Snake) Wilson's pocket as he was the developer who made millions off of developing PInewood Gardens without incurring the cost of putting in a suitable drainage system notwithstanding his prior knowledge of the topography of the area......SNAKE NEW FULL WELL BEFORE HE STARTING MAKING MILLIONS FROM THE DEVELOPMENT OF PINEWOOD THAT THE WHOLE AREA WAS PRONE TO SERIOUS FLOODING. Millions have been spent by the government (Bahamian taxpayers) over the years dealing with this problem....millions that should have been spent by Snake as the developer in the first place!

I'm a home owner and if I knew what they were doing back in that swamp land I would never have brought that home .When they should have been putting in fill they took it out.This $13 million should come out of Frankie (aka Snake) Wilson's pocket .I agree with you he never even tried to help us for many years he knew about our problems .But like I love to say God don't like ugly he only makes them .Time will tell WILSON YOU WILL SEE ALL YOUR WRONGS BEFORE YOUR EYES ONE DAY!.All of us in Pinewood have suffer with all of wilson problems along with the crooked Insurance company's .Whom seems to be of no help when we need them .And Rolle please do us a favor and don't tell us about no drainage problems and what it cost because your beloved PLP was at the helm of all this BS when they created Pinewood like everything else that they touch turns to dust.Pinewood MP Khaalis Rolle yesterday announced that he will attempt to solve the vexing flood issue yes we know ATTEMPT wrong word ....

Speaking of clearing drains, was in the downtown area today (June 14th) and saw at least four drains in front of the Rodney Bain Building @ Parliament & Shirley Streets that are among MANY that should be cleared out; packed solid with debris and small trees sprouting! This is island-wide! Are people being paid to do this job or does no one notice things like this? Two minutes of rain and everywhere is flooded because the drains are blocked! It's Hurricane Season: they work should be on-going! Wasn't there a vacuum type truck that did this job? Shovels and gunk piled along the side to the road is so backwards.

PLP in charge now............. The Snake will not pay, we will pay the bill for him......... And he is been praised as an outstanding businessman and national advisor to the government

Thats how it goes with the Pingdomites