Governor General To Step Down Next Month 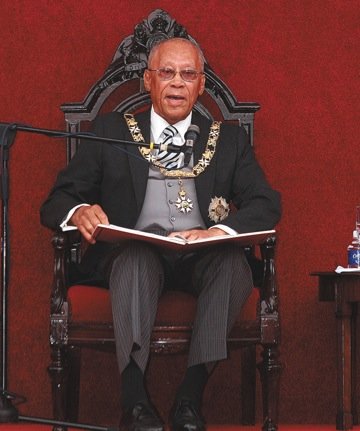 GOVERNOR General Sir Arthur Foulkes will officially demit office next month, according to a government source.

Sir Arthur, 86, and Lady Foulkes will leave for London on Saturday. On June 26 Sir Arthur, accompanied by his wife, will call on Queen Elizabeth at Buckingham Palace for the customary farewell visit before demitting office.

Sir Arthur, a veteran journalist, was sworn in as the country’s eighth Governor General on April 14, 2010. He was praised for his political and social activism by former Prime Minister Hubert Ingraham during the ceremony.

Sir Arthur was one of the founders of the National Committee for Positive Action, a think tank and activist group within the PLP that supported the leadership of Sir Lynden Pindling, and contributed significantly to the achievement of Majority Rule.

He drafted the PLP’s petition to the United Nation’s Committee of Twenty-Four, on decolonisation, and was a member of the delegation that presented the petition in 1965.

Sir Arthur penned many political documents and contributed to the manifestos of both major political parties.

He was one of the Dissident Eight, who rejected the leadership of Sir Lynden in 1970 to become a founding member of the Free National Movement in 1971. Notably, he drafted the FNM’s first platform that year.

In his early years, the Mathew Town, Inagua-native first worked at The Nassau Guardian as a linotype operator and proof-reader. He joined The Tribune as a linotype operator in 1948 and ascended the ranks to become news editor under the tutelage of then-Editor and Publisher Sir Etienne Dupuch. From 1962 to 1967, he served as the founding editor of The Bahamian Times, the official organ of the PLP.

He said that although he was aware of Sir Arthur’s upcoming meeting in London, the event did not automatically indicate a resignation.

“I think that we do the country and the office of Governor General a great disservice, and this particular occupant a great disservice, by encouraging speculation,” Mr Smith said. “Sir Arthur has performed in the office in a stellar way, and I think that his departure – whenever that is to be – shouldn’t follow rumours about people who would wish to see him go, based on speculation as to who is to be or wishes to be his successor.

He said: “He deserves all the courtesy and all the honour that not only the office requires but he personally should receive.”

Mr Smith added: “(Sir Arthur) brought poetry to the office of the Governor General, his language. So whenever he leaves, before he demits, I hope he summons all journalists and tells them how lofty and noble the profession is.”

Cut your tongue out. and your pension number is very overestimated. He ran sheep much better than you. This man endured a physical fight for us to have choice. bit.ly/T6yqlp

And Dame Marguerite must be trying on her ball gown in anticipation and rubbing her hands in glee. How much will this gala cost the Bahamian people? And not to be rude, but remind me why we need a governor general?

Sheeprunner, I think that Lady Foulkes would get his pension for her lifetime if Sir Arthur were to die. Afterall, isn't Dame Marguerite already (and still) getting pension from Sir. Lynden? And the expenses keep on coming...

How much galas actually cost the Bahamian people. Some of those gala locations and organizers know who's upstanding and have sincere respect and gift actually. Something the ungrateful who take their freedoms for granted and sell to foreigners would never do because they would never even discover their history. I only know Perry to pay for his honors. You were already rude, it is due homage and a people's dedication to the cause. Or perhaps Marguerite's Rolls Royce should be collected for your accounting. The only thing that must keep Sir Foulkes awake is his choice of a Overtown boy with slick speech who's charm people fell for simply because he went to school in England. Was a big deal at the time and what a shame to use that skill for what he did , and his prestige to have them swoon.

Wow, did you even proof read what you wrote? When you can make sense, repost. As for knowing one's history -- I do, but clearly you don't.

over-the-hill. Pindling was from the mafia anyway, who cares.

Useless office, why are we still acting like peasant slaves to a monarchy, we are a sovereign nation. Screw this slave colony mentality, it is 2014. This primitive behavior has to stop, every time I hear Privy council or queen I cringe. God save humanity, the queen is just a women like our mothers, wives, daughters, & they deserve the honor first before some lady in England. We need to develope our own system of government tailored for Bahamians in the 21 century

Us blacks wouldn't grant any position to our forefathers. Do we even know the word. The colony has been crumbled, thanks to him the crown is ours to wear proudly. Name another place at the time that gained from Britain through litigation. What black panther poisoned your mind that we are slaves? What do you think of junkanoo then? The mocking of them. Or are you like Perry who misunderstands the reverse rule and believes we are coons for not having french mardi gras and lent carnival instead. That is not pride, your degrading the free negro is supremacy. Reiterating without research is not progressive nor liberal. Our showcasing is not without identity, It Is Obama in a White House which gets under skins ..if our own culture offends you as lack of freedom, who is really 'enlightening' you? Or are they indoctrinating you. We are empowered, however Brit it wants to look. Jesus Took the keys to set the captive free when he went to hell and Resurrected. Without Privy , should we decapitate our Governor Generals too? Chiefs were ours in Africa.

U a uncle tom slave, happy to wear the crown, we were kings & queens of africa long before the brits or any civilization existed, this is not honor, this is post traumatic slave syndrome.

and is that not what I said or can you poor thing hanging around whoever is brainwashing you not do reading comprehension ...."Chiefs were ours in Africa. " and actually they would have probably been called "chiefs" before they were called kings and queens...see that's what happens when you listen to Perry and Margarite's black supremacy. Guess at the Olympics Bahamians should request bushwacks.

Don't neglect that there are also white Bahamians. That they eventually did help free our slaves boats intervening a deposit elsewhere, for selfish reasons or what not. The culture is today mixed. A freedom you don't have to appreciate, pack your georgy bundle and find the blackest place ( besides your head) to suffer in because Africans won't recognize your dumbness as theirs either. Btw "Uncle Tom" is not in this region because that wasn't our literature fool.

What a terrible terrible terrible sign of this country falling apart by the incumbency of the current government. To the point that their general disassociates himself. PLP DISRESPECTED HIM. He said wear no colors to the demonstration and they did. He presented the 100 day manifesto that they care not not fulfill. Our very own Martin Luther King who from a taxi union led this country's endangered servants to freedom. He seeded both parties for our sovereignty He is at the ranks of Mandela. There ought to be Documentaries, literature and art on this man who is monumentally exceedingly greater than Pindling.

It's time to stand together against the broken law that oppresses us.

He is a forefather of the nation. aren't we all.

Foulkes will forever hold claim to having been instrumental in unleashing the forces that created both the PLP and the FNM. With the state of our country today, this is a dubious distinction that no rational person would ever wish to have engraved on their epitaph.