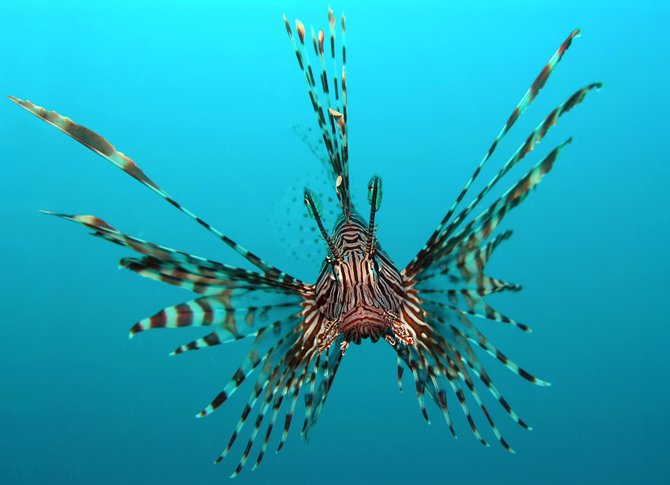 IT sounds like something from a horror film: a beautiful, feathery-looking species of fish with venomous spines and a voracious appetite sweeps into the Gulf of Mexico, gobbling up everything in its path.

Unfortunately for the native fish and invertebrates it’s eating, this invasion isn’t unfolding on the big screen.

In recent months, news has been spreading of lionfish, a maroon-and-white striped native of the South Pacific that first showed up off the coast of southern Florida in 1985. Most likely, someone dumped a few out of a home fish tank. With a reproduction rate that would put rabbits to shame and no predators to slow its march, the fish swept up the Eastern seaboard and down to The Bahamas and beyond, where it is now more common than in its home waters.

“The invasive lionfish have been nearly a perfect predator,” says Martha Klitzkie, director of operations at the nonprofit Reef Environmental Education Foundation (REEF), headquartered in Key Largo, Florida. “Because they are such an effective predator, they’re moving into new areas and, when they get settled, the population increases pretty quickly.”

They’re also starting to making waves in Texas waters. Lionfish first appeared in the western Gulf of Mexico in 2010; scientists spotted them in the Flower Garden Banks National Marine Sanctuary, a protected area about 100 miles off the Texas coast, in 2011. Now scuba divers spot them on coral heads nearly every time they explore a reef. So far, significant declines in native fish populations haven’t occurred here, but the future is uncertain.

“It’s kind of this impossible battle,” says Michelle Johnston, a research specialist at the National Oceanic and Atmospheric Administration (NOAA) in Galveston, who manages a coral reef monitoring project at the Flower Garden Banks. “When you think how many are out there, I don’t think eradication is possible now.”

Lionfish are fascinating, beautiful creatures. Two nearly identical species are found in the Gulf. They grow to about 18 inches and have numerous venomous spines. Their stripes are unique, like those of a zebra. They hover in the water, hanging near coral heads or underwater structures where reef fish flourish. Ambush predators, they wait for prey fish to draw near, then gulp them down in a flash.

The fish mature in a year and can spawn every four days, pumping out two million eggs a year. They live about 15 years.

In the South Pacific, predators and parasites keep lionfish in check. But here, nothing recognises them as food - those feathery spines serve as do-not-touch warnings to other fish. The few groupers that have been spotted taste-testing lionfish have spit them back out, Johnston says.

In the basement of the NOAA Fisheries Science Centre on the grounds of the old Fort Crockett in Galveston, Johnston sorts through a rack of glass vials. Each one contains the contents found in the stomach of a lionfish collected in the Flower Garden Banks.

She points to a fish called a bluehead wrasse in one jar. “This little guy should still be on the reef eating algae, not here in a tube,” she says. Other jars contain brown chromis, red night shrimp, cocoa damselfish and mantis shrimp, all native species found in lionfish bellies. “The amount of fish we find in their guts - it’s really alarming. They’re eating juvenile fish that should be growing up. They’re also eating fish that the native species are supposed to be eating.”

Lionfish can eat anything that fits into their mouth, even fish half their own size. They eat commercially important species, such as snapper and grouper, and the fish that those species eat, too. They’re eating so much, in fact, that scientists say some are suffering from a typically human problem - obesity. “We’re finding them with copious amount of fat - white, blubbery fat,” Johnston says.

They can adapt to almost any habitat, living anywhere from a mangrove in one foot of water to a reef 1,000 feet deep. They like crevices and hidy-holes but can find that on anything from a coral head to a drilling platform to a sunken ship. They can handle a wide range of salinity levels, too. Their range seems limited only by temperature - so far they don’t seem to overwinter farther north than Cape Hatteras - and their southern expansion extends to the northern tip of South America, although they are expected to reach the middle of Argentina in another year or two.

“As long as they have something to eat, they’ll be there,” Johnston says. The impacts of their invasion could become widespread, scientists warn.

In the Gulf, lionfish are eating herbivores like damselfish and wrasse - “the lawnmowers of the reef,” Johnston calls them - that keep the reef clean. “When you take the reef fish away, there’s not a lot of other things left to eat algae,” she says. That creates a phase shift from a coral-dominated habitat to an algae-dominated one. “When you take fish away, coral gets smothered, the reef dies and we lose larger fish. It’s a snowball effect of negativity.”

She lifts the lid of a huge freezer. Dozens of frozen lionfish faces peer out. Another rack of vials contains clippings from lionfish fins. Scientists use the parts for analysis, so they can determine species and gene flow.

“They’re a beautiful fish, and I always feel a little bad when I remove one,” Johnston says. “But to remove one and dissect it and see the fish in its gut that should have been on the reef, I don’t feel so bad. They’re invasive and do damage and shouldn’t be here - they should be in the South Pacific.”

The only known way to keep lionfish populations in check here, scientists say, is human removal.

Scientists don’t want to bring in another non-native fish to eat lionfish, for fear of creating another invasive species problem, and sterilisation programmes cost too much and are not logistically feasible, Johnston says.

That’s why lionfish “derbies,” or fishing tournaments of sorts, are popping up around the Caribbean and Gulf. Locals are encouraged to kill and gather the fish, and in some places, including Belize, cook them afterwards.

A recent study, also by Oregon State University, found that native fish populations in The Bahamas grew by between 50 and 70 per cent on reefs that are regularly culled for lionfish. On reefs where they’re not culled, though, native fish populations decreased by an average of 50 per cent. That seems to indicate that safe havens can be created where native species can recover.

“We’re never going to be able to eradicate lionfish, but there is a level where the population can be controlled and impacts can be limited,” says Klitzkie.

REEF has hosted a series of six lionfish derbies in southern Florida and The Bahamas. Participants have collectively removed more than 12,000 lionfish since the series started in 2009. “We’ve found they’re really making an impact on lionfish population,” Klitzkie says.

In the Gulf, researchers like Johnston have special permits that allow them to remove lionfish when they spot them in the Flower Garden Banks sanctuary, but they need help. And that takes divers, boats and money. “It’s really an uphill battle ... in times of limited budget, it can seem dismal,” Johnston says. “The second you stop, they come back.”

The Flower Garden Banks sanctuary recently landed a $20,000 grant for lionfish research from the Texas State Aquarium. The money will be used to train local divers to safely collect and remove lionfish from localised habitats in the Gulf. An invitational roundup is planned at the Flower Gardens Banks in September, too.

Texas anglers can take all the lionfish they want outside the Flower Garden Banks using spears, nets or hook and line, as long as they have a fishing permit. Inside the sanctuary, only hook and line is allowed, but that’s not very effective because lionfish usually stalk and eat live prey whole. Try cut squid as bait.

Another key to lionfish population control? Getting people to understand that lionfish are safe to eat - and tasty. That word is slowly spreading. At least one Texas restaurant - the raw bar Cove, inside the Houston restaurant Haven - regularly puts lionfish on the menu.

Jean-Philippe Gaston, the chef at Cove, said some of the restaurant’s regular customers, who are scuba divers, alerted him to the lionfish problem in 2011. Haven hosted a lionfish dinner to get the word out. When Cove opened in 2012, it became a staple on the menu there.

“We serve it everyday,” Gaston says. “A lot of people come in just for it.”

The fish is flaky and mild tasting, not fishy, and takes on the flavour of whatever seasoning it is prepared with, he says. It can be fried, poached, served raw, encrusted in peanuts, wrapped in leaves and steamed or marinated in coconut milk with lemongrass, jalapenos, orange segments and ginger, just for starters. To prepare it, though, the cook has to snip off the spines before filetting it.

But for now, it’s an expensive fish for most restaurants to carry. That’s because the fish are usually spear-caught, and they’re difficult to handle. An accidental puncture causes swelling and localised pain. If you’re stung, immerse the wound in hot water to break down the proteins in the venom.

A market might be developing, though. In Florida, local lobstermen are catching lionfish in their lobster traps and making more money selling the fish than the crustaceans, according to Klitzkie. The organisation publishes a lionfish cookbook that features about 100 recipes, from bacon-wrapped lionfish filets to fritters, ceviche, cakes and tacos made from the invasive species.

A gourmet appetite for lionfish would be good news for the Gulf. “Order it,” Johnston says, tapping on the tank of the office’s resident lionfish mascot, a golfball-sized fish named Woodstock. “It’s the greenest fish you can get.”

For instructional videos on preparing lionfish for cooking go to www.reef.org/programs/exotic/lionfish/resources.