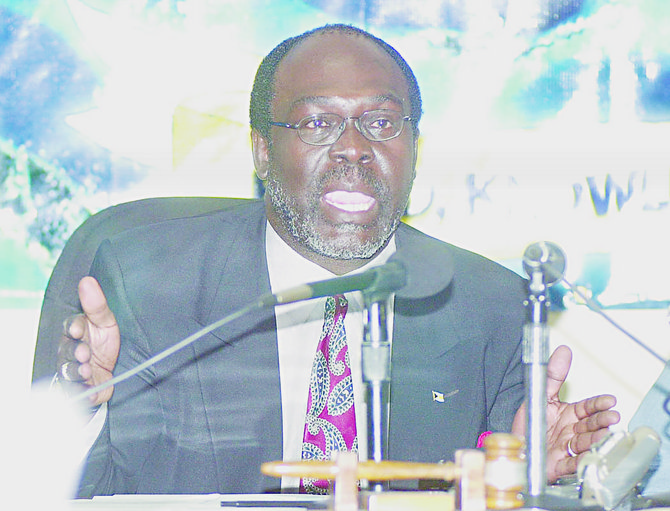 The Trade Union Congress’s (TUC) president yesterday backed a 100-133 per cent increase in the Bahamas’ minimum wage, describing this as “reasonable”.

Obie Ferguson told Tribune Business:  “The TUC is of the position that there ought to be an adjustment to the minimum wage.  I like to refer to it as the living wage.

Labour Minister Shane Gibson recently said the Government will consider proposals for an increase in the country’s minimum wage. The minimum wage for the public sector is currently $210 per week, and $150 per week or $4 per hour for private sector employees.

The proposed minimum wage increase has sparked mixed reaction in the private sector. Rupert Roberts, Super Value’s owner, said he would be in favour of raising the weekly rate by 33 per cent to $200, and would adjust salaries at the lower end of the supermarket chain’s pay scale accordingly.

However, Robert Myers, the Bahamas Chamber of Commerce and Employers Confederation’s (BCCEC) chairman, expressed concern that such a rise would spark pressure for similar salary increases throughout the economy - especially in union-dominated sectors.

Mr Ferguson said that top on` the TUC’s agenda was were calls for changes to the Employment Act that would make employees, and their severance pay/benefits, priority or secured creditors of Bahamas-based companies that went into liquidation.

‘That is on the TUC’s legislative agenda. That is a very important issue that we want to see addressed.  It is important for workers in this country,” he added.

The nutter is off his rocker!! It's really quite simple...don't live beyond your means...and that means kids as well!! If you can't afford to support 2...or 4...or 6 kids...DON'T HAVE THEM IN THE FIRST PLACE!! Double the minimum wage...get the buck out of here!!

No question the miniumum wage should be higher, as the cost of living has gone up considerably. However, to do it in this economic climate is just asking for trouble. With VAT looming and no relief of duty and freight costs, many busiinesses are barely hanging on. If wages increase now, many businesses will have to close their doors.

Then raising the miniumum wage will mean nothing if jobs are lost when businesses close.

I do agree that the minimum wage is stupidly low just now, and in our business of nearly 200 people the MOST basic job does not even get minimum wage and even at that the lowest wage is probationary and gets bumped up after the probation period...but to double it and then some...get the buck out of here. We will shut our doors and put a couple hundred long term employees out to pasture...

You are paid according to your value, increase your value increase your marketability you will increase your pay. The underlying problem goes beyond minimum wage, cost is the elephant in the room. It cost a fortune to live in the Bahamas, ordinary goods, services, and basic living expenses have inflated astronomically in comparison to wages across the board. Many are living a fraud just to hold onto some social status but getting further and further behind on bills each month. Broke down houses in the ghetto that were worth 5 maybe 10 thousand in the 90's are now going for 50,000. A loaf of bread $6.00, peanut butter $6.00-$8.00, basic things cost to damn much. The question we should be asking is what the hell happened to an affordable Bahamas? The government has set up its own people to fail..

If every increase in salary gets and equal increase in price we will still be in the same situation or maybe worse. I don't think any smart business person is willing to let go of competent quality employees for a few bucks an hour raise if they can maintain good profitability.

Timing may not be ideal but let's not pretend as if $150 per week is a reasonable salary, especially in this country. You can live below your means all day, everyday and $150 per week would still remain a poor excuse of compensation.

Agreed, $150 a week is low, the question is why is a particular persons labour valued at $150 a week? Minimum wage is for kids & unskilled individuals.

NOT every person in this country that holds power has common sense! Seems like Obie would rather see fewer persons employed and earning $350.00 a week rather than more persons employed and earning $175.00 a week. If a worker comes into the job market earning all he needs to sustain himself and/or his family, then what motivation will be there for him to better himself and advance in the job market? Obie must remember that minimum wage is not to assist persons who come into the work force fully equipped and educated or skilled and able to demand the wage they desire. To the contrary it is to ensure that persons who may be challenged when entering the job market are not taken advantaged of. If a mother of four children is earning minimum wage then she needs to look more to the father of the children and , in the alternative to social services for assistance. Then she needs to look to improving her own skills to move from a minimum wage level.

The real issue is the cost of living ... but this requires major adjustments to our tax regime/govt spending .... productivity is another major issue

Undoubtedly the minimum wage is a bad joke. What person besides an illegal Haitian can live on $150.00 per week?

As an employer, I wouldn't dream hiring a person at a starting salary of any less than $300.00 per week.

Robert Meyers is a money hog. Caribbean landscape is the most expensive company in the country well known for exorbitant rates in Lyford Cay and Old Fort Bay areas. Yet Robbie expects to pay people minimum wage?

Government needs to step in and protect Bahamians from such unscrupulous employers.

So are you suggesting that companies like McDonalds and others that are labor intense but low profit should close?

Here is the problem. Both Governments have used the public service and it's jobs to buy votes. Therefore we have a grossly overstaffed civil service that the Government cannot afford to pay at this time. From what I understand they borrow every month just to pay the civil service as it stand now. So How in the hell if they raise the minimum wage will Government be able to pay the civil service. Thanks to CROOKED LEADERSHIP and BAD GOVERNANCE this is almost impossible to make happen! Please God give the Bahamas some REAL LEADERS, the jokers we have had for the last forty years are KILLING US!

We have thousands of general service workers on contracts in the various Ministries earning government minimum wage right now with no job security and pension benefits etc!!!!!!!! Thats a crying shame. Obie Ferguson and John Pinder need to talk about that.

$150 per week is ridiculous and should be criminal. To defend it by saying that an increase will cost jobs is baloney. Why not pay $100 a week then? Or $75? Businesses would be better able to afford to hire more surely. $250 should be minimum pay for a full week of work.

Since when has the Govt had a higher Min wage than the private sector? When introduced, min wage was lowered to $150 from the originally proposed $170 as the Government did not meet that minimum themselves. The real issues are Lack of economic activity via Government strangulation and lethargic processing of required permits/licenses and all government services, Lack of productivity in both Govt and Private sectors, Lack of basic skills particularly at school leaving ages high rates of pilferage across the board, High utility costs, high fuel costs, high import costs and the looming new costs of WTO/IMF/EU-EPA compliances an rules.