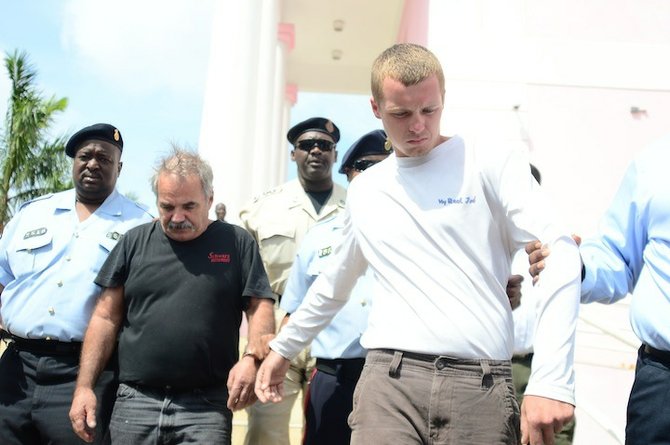 TWO Americans accused of killing a fellow countryman in Bimini five days ago were each granted $35,000 cash bail yesterday, four hours after their arraignment.

Chief Magistrate Joyanne Ferguson-Pratt had stood down her decision on a bond for 19-year-old Tyler Valles and 62-year-old Robert Schwarz after considering submissions made by their lawyer Wayne Munroe and deputy director of public prosecutions Franklyn Williams.

At 4pm yesterday afternoon, the chief magistrate decided that the men, who were charged with the March 14 manslaughter of 45-year-old Carl David Yerder, would be granted a cash bond that was reasonable enough to ensure their return to the Bahamas for their trial before the Supreme Court.

However, they were both remanded to Her Majesty’s Prison for the night and placed on the court’s order of attendance for Wednesday where they are expected to post bail.

Valles of Key Largo, Florida and Schwarz of Connecticut, appeared before the chief magistrate five hours prior to being granted bail.

The chief magistrate informed them of the manslaughter charge and particulars, which alleged that they, concerned together, intentionally caused the death of Yerder by means of unlawful harm.

Yerder, a resident of Fleetwood, PA, was found lying in the grounds of a hotel with stab wounds. He was pronounced dead at the scene.

“For the offence, you are not required to enter a plea,” the chief magistrate said before asking Mr Williams how the Crown intended to proceed with the case.

“We intend to proceed by way of Voluntary Bill of Indictment,” the DDPP said.

“What that means,” the magistrate told the accused, “is your matter will go straight to the Supreme Court.”

She further informed them that they were not allowed to enter a plea to the charge at this time because “the offence is indictable.”

When the magistrate said the consideration of bail did not arise, Mr Munroe interjected that this was not the case.

“Manslaughter is a part B offence,” he said, explaining that it was not listed as a capital offence and therefore bail could be considered.

Mr Williams, in response, accepted the point made, but still opposed the application for bail.

However, he added that if the court considered granting bail in the circumstances, he recommended they be given cash bail.

The chief magistrate allowed Mr Munroe to make his submissions on why his clients should be granted bail.

Mr Munroe emphasised that manslaughter was not a capital offence and that the Crown’s case was that the deceased, who was reportedly intoxicated at the time, broke into a vessel docked at the Big Game Club Resort and Marina on Bimini that was occupied by Valles (crewman) and Schwarz (captain’s guest).

Munroe added that the stabbing occurred during a struggle when the deceased confronted Valles over being kicked off the boat for trespassing.

“We understand that this is the Crown’s case and much of this is caught on CCTV of the resort,” he added.

Mr Munroe said they should be admitted to bail on the basis that a similar incident had occurred several years ago in the case of Daniel Ayo, an American who was granted $50,000 cash bail on a murder charge.

The chief magistrate said she was very familiar with the case.

Mr Munroe said the difference between the two cases was that Ayo was the son of wealthy parents whereas Schwarz was only a guest on the vessel that Valles worked on.

In response to the submissions, Mr Williams submitted that if the court was considering granting cash bail, the amount should not be relative to the charge, but “what is reasonably necessary to secure their return and attendance.”

The chief magistrate said she would give a decision at 3pm. However, her decision was not handed down until 4pm.