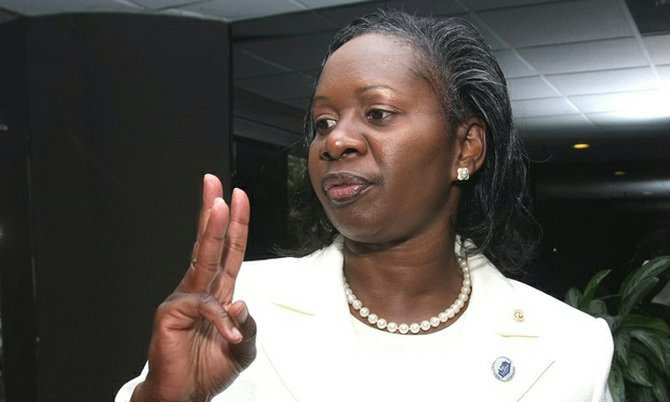 The move, which was hailed by BUT president Belinda Wilson as a major victory for her union, resolves a longstanding issue that began last year when Ms Wilson was denied access to Anatol Rodgers High School for a lunchtime meeting with teachers.

The Chief Justice ordered that the Ministry of Education - which must now pay the legal expenses of the BUT - must immediately send a circular to all public schools in the country informing school officials of the policy change.

His ruling, according to BUT’s attorney Kahil Parker, is “in accordance with the Collective Bargaining Agreement” which gives the principal the power to approve union executives’ requests to visit school campuses.

“We’ve been denied access to school campuses since last September,” Ms Wilson said. “A circular was sent out telling principals not to give union executives approval to conduct any union business or have any union meetings on the campuses between 9am and 3pm. We were going back and forth with the Ministry on this issue. We went to the labour department and we did not get any satisfaction there. We applied to the Industrial Tribunal and they said they did not have any jurisdiction to hear the matter. That left us with no other alternative but to go to the Supreme Court last November.”

Ms Wilson said her union can now get back down to business and hopefully address concerns of teachers, some of whom, she claimed, have been “mistreated in the last eight months.”

She said: “Over the last eight months teachers have really been mistreated and unfairly treated on school campuses. They would be called into meetings and not be told beforehand what the meeting was about and some of them were not even allowed to have their shop steward or union representative accompany them; they were denied their right to have representation.

“Teachers will be very happy to see union executive officers on the school campuses again. With us winning in the courts we can put this matter behind us and we can begin to focus on how it is we can partner with the Ministry of Education to ensure that education improves.”

Ms Wilson said the victory for her union is sweeter because it comes in May, a month that has historically been important to the BUT. “Today is the birthday of Mable Walker, the founder of BUT, and the union was also founded in the month of May,” she said. “We are really pleased that justice has prevailed. We got justice. It goes to show that the government, the minister, that all of us, must abide by the law and we are not above the law.”

In an interview with ZNS, Minister Jerome Fitzgerald said the ruling could hardly be interpreted as a victory since nothing much will change. “The Chief Justice said we could tell them what our preference is but cannot tell them what they can do,” he said. The legal costs have yet to be determined.

The BUT will hold its first public high school meeting next week, Ms Wilson said.

Congratulations are in order to Belinda Wilson and the B.U.T. for standing up for their civic rights, in the face of oppression and tyranny. For far too long these political leaders and MP's have overstepped their boundaries and have engaged in practices that are not in accordance with their office, or scope of practice. In some cases... their actions have been down right illegal (ie Darron Cash's issue). These politicians are under the misapprehension that they can do as they please, and we the common citizens have no other recourse but to grin and bare it. How wrong they are! And in typical, idiotic, dogmatic, ignorant fashion, MP Jerome Fitzgerald stands in stark stupidity and defiance as he denies these current rulings are a victory for the B.U.T. How stupid and arrogant can one be??? Of course it's a victory! And a big one at that! But once again Mr Fitzgerald is displaying how pride trumps common sense in the day to day operations of this country. As much as we've liked to criticize Belinda Wilson, she is doing her job and the right thing by advocating for her teachers. The school system is in shambles while school teachers are expected to work in hazardous conditions. Far too often we as citizens like to place the blame of our failing students on the teachers, when the truth is... the parents of these students are the ones who are failing. Parents today don't teach their children discipline, honesty, respect, and the importance of hard work and acquiring a good education. And then they send their rude, disrespectful, ill-mannered, knuckle- headed children to school to not only impede the learning process of other students, but to defy the teachers themselves. Valuable time is wasted by school faculty attempting to discipline these particular types of children, who have little interest in learning anyway. As a result, some of the children in the government schools aren't learning the necessary skills needed to survive in the honest world... thus the are turning to dishonest ways to survive. Bad parenting and the destruction of the home is the reason for our failing students, not the teachers. When I was a child and a student in the government system, everyday after school my mother would have me bring my school books to her so she could assess what I did in school, and plan ways in which she could enhance my knowledge base for my grade level. She reenforced and supplemented my teacher's efforts. Now... how many parents do that today??? I assure you that it's very few. We as Bahamian parents need to get serious about getting our houses in order. When we do... we will begin to see a change in not only our schools, but our country as well.

Omgoodness. Ok... let me see if I can help you out. Incase you are unaware, meetings take place on school campuses all the time. Whether it's a staff meeting, a faculty meeting, an administrative meeting, a head of department meeting, a grade level leaders meeting, a prefect's meeting, a union meeting or even a custodians meeting. They happen, and they occur more often than you realize. In some cases, these meetings take place when classes are in session (depending on what type of meeting is being held). I know this to be a fact because it occurred during my tenure as a student, and I'm sure it occurred for you aswell although you may not have realized it (if you indeed did go to school). My point is, union meetings conducted on school campuses do not affect a student's ability to learn; especially when they are held in a closed forum envolving only delegated members. But what does affect a student's ability to learn is the constant distraction by other students from bad homes who have no interest in education. Some of these government school students don't seem to possess the simple ability to read or write, much less conduct simple arithmetic; and you're expecting people to believe that it's the result of union meeting being held on campus??? So what's the excuse for the other tens of schools where union meetings don't take place (i.e. family island schools)??? Get real... you're talking rubbish. Unions are a part of any entity related to sovereignty and democracy and for the most part have served its citizens well. When I hear people like you talk, it's no wonder why our country is in the state that it's in.

Furthermore... its Jerome Fitzgerald who has caused the country more money, not the teachers union. His prideful, idiotic stance against the B.U.T. was a clear violation of the current agreement that was in place! He too, like many of our government school children, did not do his homework. As a result he had no idea that he was in breech of the current contract, and thus the law. This is ultimately why the Chief Justice ruled in favor of the B.U.T. And for you to refer to any union in our country as a terrorist organization is just asinine. Anyway... I guess your name says it all.

Also..... who is educating the people about the new high school diploma starting in September and when is school gonna close in June????????????

First i'm hearing of this new diploma system. Mind elaborating for me so I can then go and check the facts?

Brenard, you are a young Bahamian. You betta learn fast how the old regime do things. The ordinary Bahamain will be the last to know whats going on.

It was an asinine, stupid, dumb, JACKASS move in the first place to deny BUT executives to conduct business and hold meetings on school campuses.

BUT President Belinda Wilson is not making MP Jerome Fitzgerald look like a fool. He is doing a first class job of that all by himself.

Exactly what is the education level of MP Jerome Fitzgerald?

The answer to that question might explain several thing!

The educational level of Mr. Fitzgerald is very high. He never said the teachers union members can not meet at the Schools. What was said is not during the School hours. between 8:30 AM and 3:PM. what is wrong with that?. this time is for the children to be taught.. Also take into account, this situation does not affect the Minister's children they go to private schools.

@sheeprunner -see how well its coming together for Bahamas Carnival in May 2015??