Bishop Calls For People To Rally Behind The Fight Against Crime 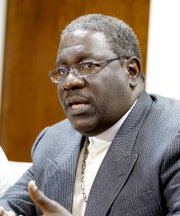 A LEADING figure in the religious community yesterday called for Bahamians to rally behind the fight against rising crime, asking all sectors of society to become more involved in “this national nightmare”.

Bishop Simeon Hall, of New Covenant Baptist Church, said all Bahamians should put their country above themselves. He urged them to take the Prime Minister’s declaration last week that the criminal element has declared war on the people as “a clarion call for all citizens to enlist as patriotic foot soldiers against this criminal encroachment”.

He said that it was time to send another message to the criminals and not leave it to the politicians. “Politicians alone do not make good crime fighters as they generally see things primarily in their interest of being re-elected,” Bishop Hall said.

“The apparent disconnect between the efforts of the police and the courts must be seriously addressed if we are to win this war.

“Crime is a national problem. It is sad that the current official Opposition is doing the same thing the current government did while in opposition – when it comes to the crime problem, they each blame the governing party. Unfortunately, it is still true that what a political party states is predicated on whether it is in power or not.

“All the pronouncements and warnings by Prime Minister Christie, Minister of National Security Dr Nottage, church and civic leaders and a plethora of others are not being adhered to by some who are hell-bent on a criminal lifestyle.

“All Bahamians who love their country must put country above self. The staggering level of crime has emerged as more than a political issue – it permeates every aspect of our country, affecting us socially, economically, culturally and spiritually and therefore needs a holistic, all-hands-on-deck response – and should not be left solely to the politicians.

Why, is there also some rally in front "for" crime we don't know about?

"If my people who are called by my name, would humble them, seek my face and turn from THEIR WICKED WAYS, then will I hear from heave and heal their land" .... Bishop Hall must encourage his fellow clergymen to refrain from a life of crime and set a godly example.

Exactly, he call for people to put the country above themselves. Since the people suppose to be the church; is he reffering to the church also?

the bishops in Nassau don't even know the words that mean WICKED WAYS because most of them are wicked cause any time you call yourself a man of god and sleeping with another man you are just like the criminals or even worst. they do these things for show I don't even respect them at all no bishops,no pastor's, no rev, none of them I have no respect at all for them

Some them even have their little children in they cars to be tucking they numbers receipts between the Holy Book's scripture pages. Comrades I don't have a clue what all is included over at New Covenant Baptist Church as part of they Sunday morning services but there is talk that at some of the other churches, over the wickedness of playing the numbers by the brothers and sisters, whist on they way to the Sunday morning services, at the services and on they way home from the services.

The supreme irony is that when Simeon Hall decided to start calling himself "Bishop", his religious affiliation at the time didn't have the post of bishop. He so much fancied that title, that he just gave it to himself.

So what is he getting out of this Band wagon? Every time certain "men of god" make the media, its definite that evil is afoot, no matter what they are backing. I don't see how you can back the ILLEGAL numbers racket, and then turn around to rally against CRIME. My gosh stand for something in its totality.

He really can't help himself. Hall simply craves attention at every turn. Just go away and do things in your community to help the crime problem. He constantly whines and pontificates about what church gets recognition but the churches he talks about are never pushing themselves in the media. He on the other hand is always looking for press coverage and recognition. Just sit small and work without looking for praise.

Isn't that what they all do...just look for attention.