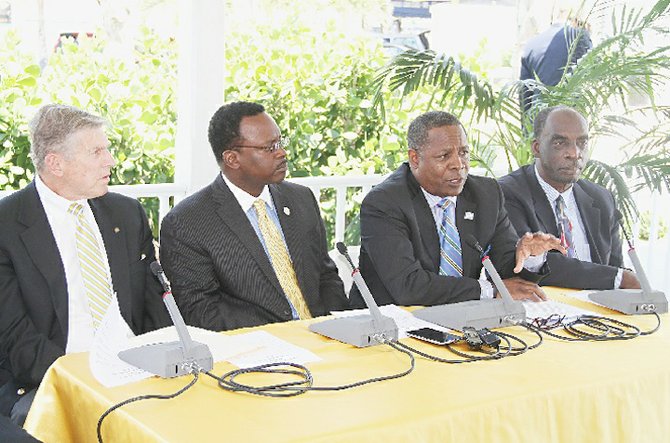 Mark the date down: December 24. The event: the 2014 Bahamas Bowl. The venue: Thomas A Robinson National Stadium.

On Tuesday in Pompey Square, a joint press conference with the Ministry of Tourism, the Ministry of Youth, Sports and Culture and the principals in Conference USA and the Mid-American Conference stamped their approval on the biggest NCAA football bowl game to be played outside of the United States.

The game, scheduled to start at noon, will be carried live on ESPN television.

Bahamian born Dr Sidney A McPhee, who flew in on a private jet organised by Darrell Freeman and Michael Cartwright, is the president of the Middle Tennessee State University, which is a member of Conference USA and Richard Giannini, the senior advisor of Conference USA, headed the list of dignitaries on hand for the briefing.

McPhee, who was born in Mayaguana before he moved to Nassau at the age of five and a product of the former Highbury High School, now the RM Bailey Secondary High, said although he has lived in the US for the past 35 years, he is delighted to be back home to bring such an incredible and exciting game to the Bahamas.

As the president of the largest university in the state of Tennessee for the past 14 years, McPhee said he was proud to have participated in six bowl games, but he’s even more enthusiastic about what they are bringing here with the Bahamas Bowl on December 24.

“I know a good opportunity in athletics when I see one,” he said. “And I’m here to tell you ladies and gentlemen, that the Bahamas is emerging now on a once in a lifetime opportunity to showcase, not only the beauty of the sun and the sand and all of that, but the beautiful culture, the people, the history, that the world has yet to see.

A couple weeks ago, McPhee said he had the pleasure of hosting Johnson, Thompson and Minister of Education, Science and Technology, Jerome Fitzgerald at the NCAA Final Four where they got to meet personally, the president of the NCAA and he indicated that countries around the world have been seeking an association with the NCAA and the Bahamas is the first outside of the USA to achieve such a feat.

“As a native son, I am beaming with pride. You are going to embark on a journey that will tell the world that the Bahamas is the place to be for culture, for sports, for education, for beauty, you name it,” McPhee said. “This country is going to make its mark and I’m looking forward to a long- time commitment.”

Johnson, welcoming McPhee back home and extending his appreciation to Giannini, said the Bahamas can now add another ‘s’ on to its slogan of sun, sand and sea and that is sports.

“You’re witnessing history today where the Bahamas is launching its Sports in Paradise programme,” Johnson said. “We have one simple, very simple goal. We dominated the relays a few years ago, we used to dominate in sailing, we dominated in boxing, we’ve had guys in the NFL and the NCAA basketball tournament, we have six NBA rings from the Bahamas, this is a sporting nation to deal with.

“But our ministry this year is launching out in the business of sports. We’re going into the business of sports with the whole hog. Sports and tourism now brings us a platform where we can show the world what the Bahamas has naturally and what we can do. The bowl game marks one of the marquee events that we will have. Another marquee event is the IAAF World Relays at the end of this month where the world will be challenging us in relays that we have never seen.”

Johnson said the Bahamas will be ready for football in December 24.

Giannini said he can confer with the slogan that “It’s better in the Bahamas” because every time he comes here, it’s a beautiful day.

“I’m excited to represent Conference USA, who has taken the lead role in putting together this bowl championship,” he said. “My first trip to the Bahamas was 49 years ago in 1965. In recent years, probably the last 10 years, it’s just a fabulous place to come. We have been staying at Atlantis, which is one of the nicest places in the world. So we are excited to bring this bowl game here.”

On June 14, Giannini noted that the process of getting the bowl game here began when they did their first site visit and after taking one look at the Thomas A Robinson Stadium, they knew that they found the right place to put on the game and they have now completed all of the certification to host the game and to have it carried live on ESPN.

Giannini took it a bit further, noting that they have now gotten a commitment from ESPN to carry the game live for the next six years, so the Bahamas can look forward to having one of the largest events ever to be staged in the Bahamas.

Rolle, the former national 400 metre hurdles record holder who now operates the sports division of the Ministry of Tourism out of Miami, Florida, said he has a mandate to bring the marquee events to the Bahamas and that is what he’s trying to do on the heels of the recent training camp by the Miami Heat and the upcoming visit by Dan Marino and the Miami Dolphins at the end of the month.

“We want to use this event and we want to thank the organisers, but we want the Bahamas to be globalised,” Rolle said. “We want the world to know that the Bahamas is there and is now just known for its sun, sand and sea, but for its sports tourism as well.

“Our sports team is now working diligently with us to make sure that this event is successful and that the world now knows that we can not only attract events to this destination, but we can execute it. Once you execute it right and do it professionally, you can go back and say that the Bahamas is a small country, but they have some big aspirations and they do some things right.”

Thompson, expressing his gratitude on behalf of Wilchcombe to the organisers of the bowl game, said this will ensure that the Bahamas becomes the No.1 sports destination in the world and they will do their part to make sure that the event will be a reality.

“This game will be held on December 24 at noon. In the Bahamas, that is a very critical period for us because it’s Christmas,” he said. “So I want to encourage our society to shop, but you can’t miss this game. It is history for the Bahamas and all of us like to be a part of history. So I know you don’t want to miss it because the colleges that will be represented will represent themselves very well.”