World Of Sharks Holds No Fear For Students 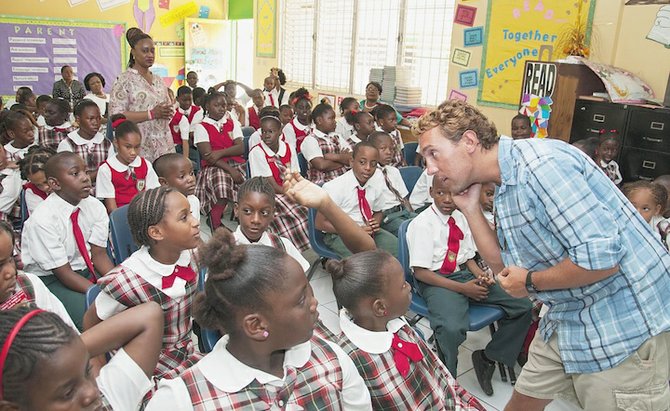 At CV Bethel High School, HO Nash, Aquinas and Thelma Gibson, a marine scientist from Stony Brook University and Marcia Musgrove, BREEF’s Outreach Manager and National Eco-Schools Coordinator - a position made possible by The Moore Charitable Foundation - opened students’ eyes to the world of sharks. The first task: diminishing their fear of the large marine predator.

“People aren’t attacked by sharks in The Bahamas because there is very clear visibility. Accidental bites occur in murky water,” said Mark Bond, one of the lead scientists from SUNY’s School of Marine and Atmospheric Sciences. “Sharks don’t like the taste of people.” But they do play a crucial role in keeping other fish populations balanced, Mr Bond said. “A healthy shark population leads to a healthy marine environment,” he explained.

Visiting Nassau halfway through the six-week expedition of locating, tagging and monitoring sharks, Mr Bond said scientists this year focused on the endangered oceanic whitetip shark. Oceanic whitetips can migrate over long distances, often crossing international and political boundaries. In order to effectively protect this species it is important to know where they travel when they leave the safety of the Bahamas’ shark sanctuary, he said.

Using satellite tags the expedition examined the oceanic whitetips movements and the behaviours driving these migrations as well as great hammerhead sharks in an attempt to better understand and protect them.

They also focused on the critically endangered small tooth sawfish. According to Mr Bond, the creation of the Bahamas’ shark sanctuary in 2011, which made all shark fishing illegal, extended safeguards initially introduced in the early 1990s when proposed longline fishing and gillnets was defeated. Together, he said, the progressive legislation on the part of the government of the Bahamas has protected several globally threatened or endangered shark species, along with their close relative, the small tooth sawfish. Sparse elsewhere, scientists are finding increasingly healthy populations in parts of The Bahamas.

Mr Bond told the students that shark populations are extremely vulnerable to the effects of coastal development that may destroy critical mangrove nursery habitats, but represent a fantastic economic opportunity in themselves. The Bahamas, he said, is already the shark diving capital of the world, which pumps more than $80 million into the economy each year.

Mr Bond said the opportunity to study sharks in a place like the Bahamas is an invaluable asset in the long-term effort to protect and preserve many species.

“The partnership with a non-profit organisation like The Moore Bahamas Foundation is critical for this research. Without them we would not be able to translate the results into effective policy to really create change,” Mr Bond said. “Every great discovery about sharks through this research is attributed to them.”

Mr Bond’s co-leader for the expedition is Dr Demian Chapman, an assistant professor at Stony Brook University’s School of Marine and Atmospheric Sciences, who is considered one of the world’s leading authorities on shark research. His students focus on how shark movements and reproduction patterns impact genetic and geographic population structures.

The Moore Bahamas Foundation is also supporting the expedition’s efforts to communicate their experiences with a SharkChronicles page, found on The Moore Charitable Foundation’s Facebook and Twitter. The expedition has been a great success so far with 48 sharks tagged in the first three days.

Additionally the team is conducting ongoing education and stewardship efforts in the Bahamas to curb illegal fishing and promote support for shark conservation among local fishermen and surrounding communities.