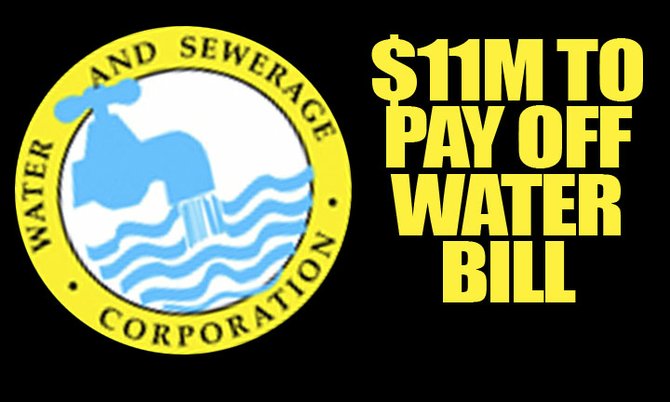 The Government was yesterday revealed to have used $11 million in taxpayer monies to pay off “delinquent accounts” owed by the Water & Sewerage Corporation to its BISX-listed water supplier, and promised: “More is on the way.”

Top Consolidated Water executives told Wall Street investment analysts, in a conference call to unveil their 2014 first quarter results, that the Government had pledged to “further reduce” the multi-million dollar sums owed to it by the Corporation.

These debts had largely been responsible for Consolidated Water’s accounts receivables increasing by $10 million from 2013 year-end, growing to $24 million at March 31, 2014, compared to $14 million.

And Glen Laville, the Water & Sewerage Corporation’s general manager, confirmed to Tribune Business yesterday that it would “still be a while before we’re” able to reduce reliance on the Government to pay its bills.

He estimated that it would be “about three to five years” before the Water & Sewerage Corporation is able to stand on its own two feet, wean itself of taxpayer subsidies and pay bills due to Consolidated Water.

The BISX-listed reverse osmosis plant operator supplies virtually all the water that the Water & Sewerage Corporation supplies to its New Providence customers, and delinquent account balances have been a regular feature of their relationship over the years.

David Sasnett, Consolidated Water’s chief financial officer, told analysts: “I’m pleased to announce that we have received $11 million in payments over April and May from the Bahamas government on delinquent accounts balances due to us.

“And the Bahamas government has informed us additional payments will be forthcoming in the near future to further reduce the delinquent balance due to us.”

That is good news for Consolidated Water’s shareholders, including the Bahamian owners of its Bahamian Depository Receipts (BDRs), although clearly an outstanding sum due from the Water & Sewerage Corporation remains to be settled.

The Corporation’s subsidies have gone as high as the mid-$30 millions annually, and Rick McTaggart, Consolidated Water’s chief executive, confirmed in response to questions that the $10 million accounts receivable rise during the first quarter was largely “related to receivables in the Bahamas.

“We’ve had discussions with the Government there for several months now, and we have received payment subsequent to the balance sheet date.”

And Mr Sasnett reiterated: “They gave us $11 million, and told us more was on the way.”

The Consolidated Water chief financial officer added that it could prepay a $10 million loan taken out to finance its expansion activities elsewhere by using existing cash balances, especially those in the Bahamas.

“We have substantial cash balances, including cash in the Bahamas that can ultimately be sent back to the Cayman Islands as soon as we get approval from the Central Bank,” Mr Sasnett said.

Although it was not addressed in the conference call, Consolidated Water’s filings with the Securities & Exchange Commission (SEC) reveal that the Government still has to decide who the Windsor water plant operator will be some 10 months after the BISX-listed company’s supply agreement expired in July 2013.

The original deal expired in 2013, and the Government has yet to determine whether it will renew with Consolidated Water for a further five years or select a new operator for Windsor.

The matter has been referred to a Cabinet sub-committee for a decision, and in the meantime Consolidated Water continues to operate the second of New Providence’s two reverse osmosis plants.

“This water supply agreement expired when Consolidated Water Bahamas delivered the total amount of water required under the agreement in July 2013,” the SEC filings said.

“At the request of the Government of the Bahamas, Consolidated Water Bahamas continues to operate the Windsor plant to provide the Government of the Bahamas with additional time to decide whether or not it will extend Consolidated Water Bahamas’ water supply agreement for the Windsor plant on a long term basis.

“The company is presently unable to determine if Consolidated Water Bahamas’ water supply agreement for its Windsor plant will be extended or, if extended, on what terms,” it added.

“Consolidated Water Bahamas generated approximately $1.7 million and $1.8 million in revenues from the operation of this plant during the three months ended March 31, 2014 and 2013, respectively.”

Mr Laville, meanwhile, told Tribune Business that a late 2015 deadline had been set for the Utilities Regulation & Competition Authority (URCA) to take over economic regulation of the water sector from the Corporation.

And the Ministry of the Environment will also undergo “institutional strengthening” to enable it to regulate the water industry from an environmental perspective.

Mr Laville said the reforms, part of the $81 million programme financed by the Inter-American Development Bank (IDB), would benefit consumers by providing greater oversight of the Corporation via the splitting of its operational and regulatory functions.